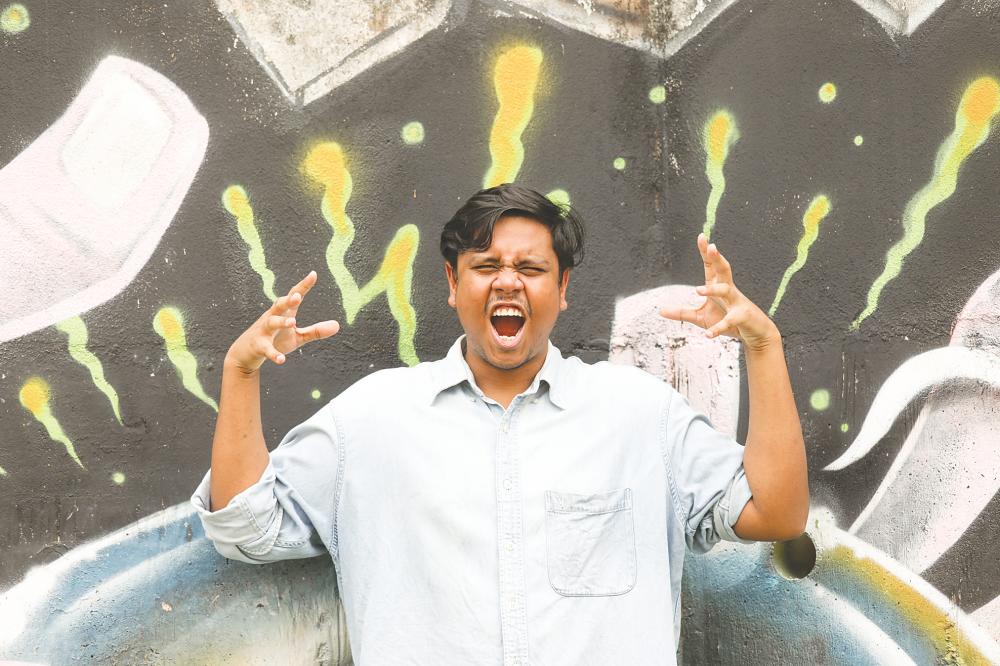 Danial is a punster who believes in the value of bringing laughter to Malaysia. — Asyraf Rasid

PUNSTER, stand up comedian and alternative comedy event organiser Danial Sham wants to push boundaries, and redefine what comedy means to Malaysians who want to venture out beyond the usual stand up comedy routines.

He has been involved in comedy events since 2016, founding event company Have Pun Malaysia, and organising the annual Pun Competition.

He was also a showrunner for Comedy Underground, an open mic concept club that allows stand up comedians to perform their skits within a certain time limit.

And to think all this started with him putting up a fake poster on social media to announce ‘the first ever pun competition’, which spread like wildfire throughout the regional comedy community, leading to him actually organising the event in November 2016.

The 28-year-old said: “I try to position myself as part of the alternative comedy scene, because I think it’s great to have a certain structure of comedy, where people [can expect] what kind of comedy they’re going into.

“I’m glad to have quite a lot of talented comedians who ... understand the concept, write down jokes, have like, great amazing punchlines, and [have helped] Have Pun Malaysia spread alternative comedy from November 2016 till today.”

Why puns? At what age did you start to appreciate puns?

“I have an affinity for puns. I still remember my first pun, one of my friends told me to put away the wine, because she [didn’]t want it to get too ‘winey’ (whiny), so that was the first ever pun that I actually cringed [at] and groaned, but then I started to have an affinity for that.

What drives you to go behind the scenes?

“My idea and my reasoning for [doing] events about alternative comedy is because there are people in Malaysia who want that type of comedy, because there are certain types of guidelines of what [to] expect for a comedy show.

“Stand up comedy is a very broad spectrum, and anybody can just talk about anything, but if you have [an indea] of what you think is going to happen that night, you are more likely to understand the jokes that are going to [be performed].”

Where did you learn how to organise events?

“I worked at Crackhouse Comedy Club. When I started working for Crackhouse, I had zero event [organisation] knowledge.

“I was there for about three months, and from there I learnt [how to] run a show ... you need lighting, music, and a really good host, and from there you can suggest what the flow is.

“I learnt about how to ‘turn up’ the event, how to do two-hour shows, and even when the place was sold out, I know what to do immediately, because I need to make sure that everybody gets on their time.

“I remember getting paid RM8 an hour, so I was [a] waiter, [an] assistant to comedians, managing lighting, playing music. So there are actually a lot of aspects you need to know before running the show, which is interesting.”

Tell me one of your success stories, and one failure story.

“My success story would be the first ever pun competition. It started out as a fake poster which then became a real thing, and now it’s an annual thing.

“[I tried] to test the waters by creating a fake poster, so at the beginning of 2016 I posted that, and it spread like wildfire ... it went [across] the whole of Malaysia, Singapore, Brunei, Indonesia ... so that’s when I knew I had to do it.

“I created a page, made sure it [was] all centralised, and then [held] the first ever pun competition at The Bee Publika.

My failure [was] I wanted to do a forum about people who [didn’t] have a tertiary education and yet [succeeded], but that one was a failure because nobody showed up ...

“I was devastated, but I knew from then on, if I did run a comedy show, even if two people are there, I’ll be very happy, even if there was only one person was there, I will perform my heart out to make sure that person had a really good time.”

What’s the biggest event that you aspire to organise?

“Probably a full-day comedy festival, or a one-hour set that I can make anybody laugh.

“I don’t want a sell-out stadium, I just want a one-hour set that I can do and make people laugh and be proud of that. That’s it really. I don’t look for spotlights, I just look for laughter.”