Special Force: Anarchy is a heist series with a difference 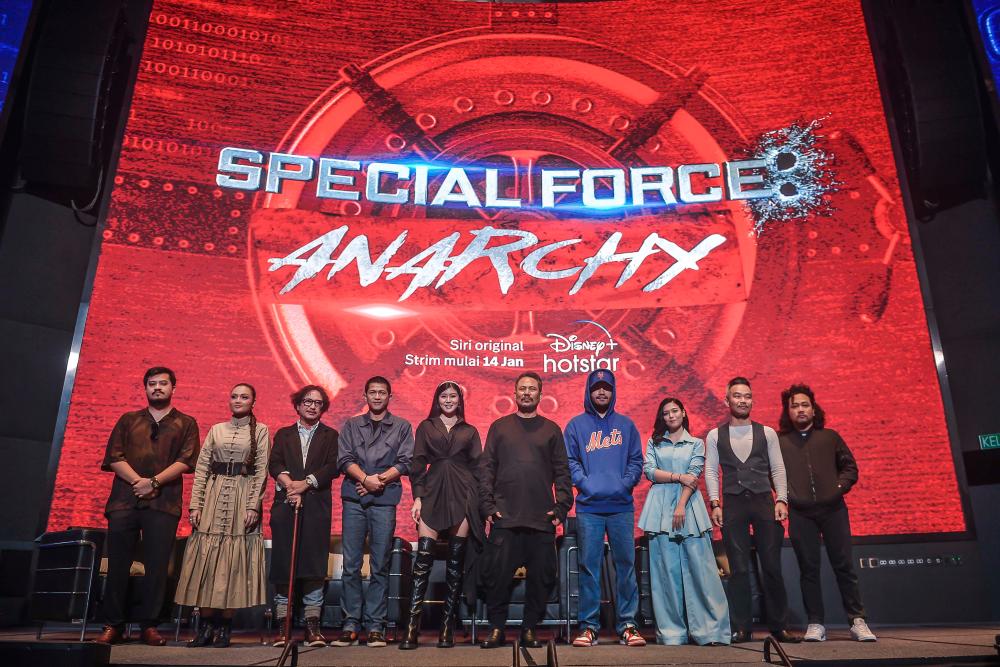 The cast and director at the launch of the series. – ADIB RAWI/THESUN

LOCAL police drama series Special Force: Anarchy is currently streaming on Disney+ Hotstar. The seven-episode series follows a courageous policewoman Iman (Puteri Aishah), as she investigates a planned bank heist in the fictional country of Tenggara and unexpectedly comes face to face with a dangerous underground group, uncovering a secret along the way that could change everything if exposed.

Directed by Syafiq Yusof and produced by Skop Productions, the series also stars legendary singer, composer, and actor Dato’ M. Nasir as Umar, the mastermind behind the planned Bank Tenggara heist and the leader of the group Anarchy.

In a recent press conference held in Kuala Lumpur, Syafiq stated that he got the inspiration for the series from his own 2018 action film, KL Special Force, which stars Fattah Amin and Datuk Rosyam Nor.

“The performance pattern in this drama can also be said to be more or less the same as the film,” Syafiq said.

Syafiq also has dismissed the notion that his new series is the Malaysian version of Netflix’s hit Spanish series Money Heist.

“Undoubtedly, if you make a drama or series with a robbery theme, people will definitely compare it with the renowned Money Heist. It has no similarity at all. But, what I can say is that it was inspired by the movie KL Special Force which was released in 2018,” he said.

Speaking further, the son of producer Datuk Yusof Haslam and younger brother of award-winning director Syamsul Yusof, added that he faced challenges when he wanted to produce a show that was set in a fictional country.

“It was quite difficult to [replicate] another country. Because the filming was carried out in the capital, so many Malaysian logos and iconic buildings can be seen.”

He added: “A lot of footage looks like it’s in Kuala Lumpur. So, what we do is use visual special effects (VFX) to change the atmosphere.”

The director, whose movies include Abang Long Fadil, Desolasi, Misteri Dilaila, and Penunggang Agama, said: “I hope it will be received well.

“This is a reboot of sorts of KL Special Force on the small screen, and if the reception is great, we will continue and expand on this with Disney+ Hotstar.”

Special Force: Anarchy is now available to stream on Disney+ Hotstar, with new episodes every Saturday.