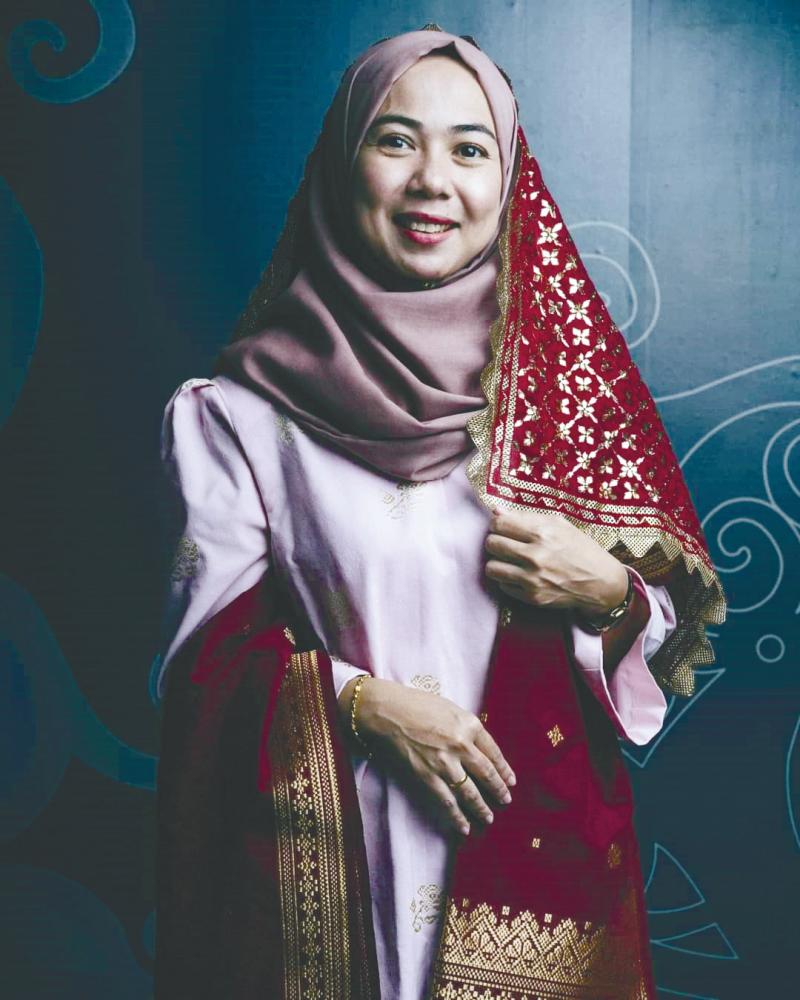 MOST people adore Sarawak for its magnificent rainforests and wildlife, but beyond nature, its people are also known for their unique creativity. The real beauty of Sarawak lies in the heritage art and crafts of its multi-ethnic communities.

Ramtiniwaiti Ramlee realised this and she is determined to preserve one of the Bornean state’s most prestigious crafts – intricately weaved Sarawak songket, woven the traditional way.

The founder of Seri Gedong Songket located in Simunjan, Sarawak, wants the world to take notice of Sarawak’s most exclusive fabric, which was once used by Malay royals and aristocrats, while preserving the traditional art of weaving among youth.

“We maintain our traditional style and the whole weaving process is done manually. We preserve the heritage art of songket weaving and present it to the world, the same way it was made more than a century ago,” she explained.

The traditional patterns were woven using gold or silver thread on a traditional loom tool. Among the hand-woven songket designs made in Sarawak are Kain Belatak, Kain Penakan, Kain Berunei and Kain Berturus.

Ramtiniwaiti is proud of the outstanding handmade quality of songket made at Seri Gedong Songket. “We also want the world to see the variation of Sarawak’s songket, the unique motifs and design of the fabric,” she said.

Besides, the songket maker also empowers young women with the knowledge of traditional weaving and at the same time, engages the residents of Kampung Gedong in Simunjan, offering them a way to earn a living.

Today, there are 10 weavers, who have been creating premium songket pieces for Seri Gedong Songket for the past 10 years.

“I want to ensure Sarawak’s songket is well-known among Malaysians, especially in Peninsular Malaysia and internationally, while inspiring the younger generations to become new songket weavers,” she said.

She believes that there is a future for the textile, especially among the younger generation.

”With all the exposure to the majestic fabric, I do believe that youngsters will be attracted to work in the field of weaving.”

“The government and the NGOs are also playing a pivotal role in encouraging the youth to get interested by organising weaving-related programmes,” said the founder.

Although she retained the traditional patterns and method of producing the meticulously-made fabric, Ramtiniwaiti has ideas to turn the textile into a more contemporary design in the future.

“We do have plans on making the designs more fresh and relevant to the next generation, while still keeping the traditional design in our songket weaving,” said Ramtiniwaiti.

This would mean changing up the placement of patterns on the textile, creatively combining different traditional patterns into one fabric and adding new and trendy colours, which would appeal to the future generation to look forward on the design and interested in the making of songket itself.

Last October, Seri Songket participated in Tenun Fashion Week and presented various patterns on the runaway, made by the weavers from Seri Gedong Songket. This is one of the first few steps made by Ramtiniwaiti to promote the textile in Southeast Asia.

“The most apparent difference between Sarawak songket and others is the technique of thread division (or splitting).

“Sarawak songket is made in a way that keeps the neatness of the threads in the fabric while keeping its elegance,” she said.

Weavers apply a unique technique called Technique Tapok during the weaving process, in which the thread is hidden behind the patterns.

This, creates a ‘neat’ pattern, an important criterion of Sarawak songket, specifically, Kain Belatak. Thus, there is no extra thread hanging at the back of the brocade pattern and fabric and as a result, both sides of the songket can be used as the pattern appears on both sides.

Seri Gedong Songket’s logo ‘Maskota’, a gold plated crown, is woven into the design to differentiate their songket from other songket produced in in Sarawak.

Ramtiniwaiti also designs her own patterns, inspired by flora and fauna for custom-made songket.

Back in the day, weavers were inspired by everything in their environment, which they artistically converted into a motif within the songket.

For instance, the ‘Penakan pinang masak’ motif was inspired by ‘buah pinang’, which grows abundantly in Sarawak and its colours such as orange, green, maroon and yellow, inspired the colours of the songket.

The price ranges from RM1,800 to RM10,000 or more, depending on the complexity of the design and it takes up to one to three months to complete, but the end result is stunning. 2.Foreign selling of equities on Bursa rises to RM740.6m