Frozen by the Sun 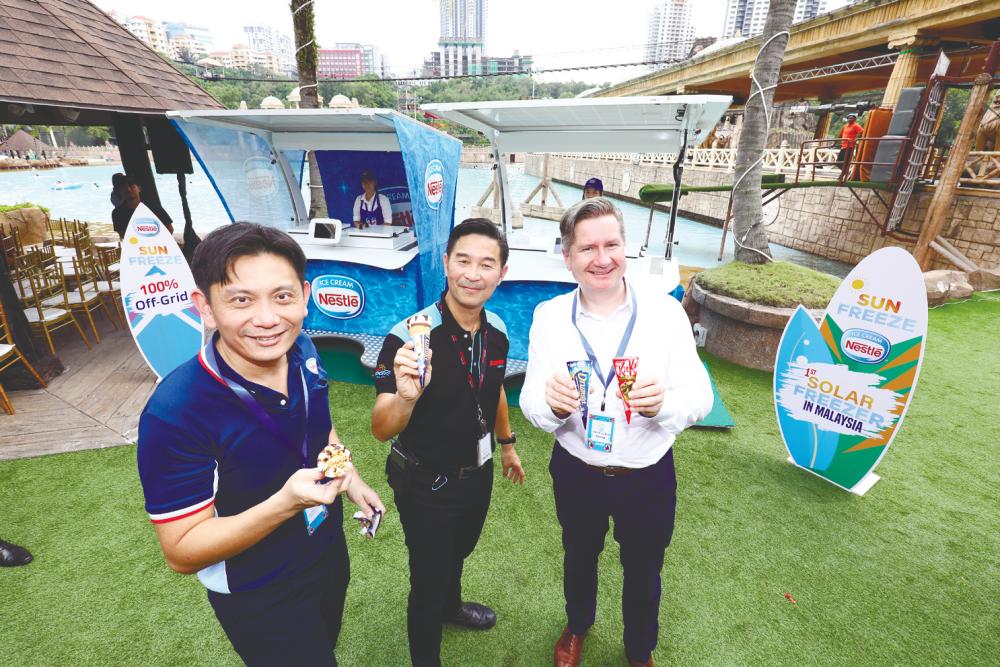 MALAYSIA may not have self-lacing boots, hoverboards, self-drying jackets, or even flying cars, but thanks to Nestle Ice Cream Malaysia, we now have the world’s first solar-powered ice-cream kiosk.

Free ice creams were given out to members of the public to commemorate the event.

“Malaysia has the perfect weather to test out and debut the Nestle Solar-Powered Ice-Cream Kiosk because it is always so hot and sunny here.”

By using photovoltaic panels on the roof of the kiosk alone, the built-in freezer can maintain a maximum temperature of -25°C in a 35°C environment. On top of that, the stall can run for two to three days on a full charge.

“The kiosk can also function on a cloudy day and at night, thanks to its smart energy management and storage system,” Mayer said.

“It is fitted with LED lights, a sound system, WiFi, and smartphone chargers. To further reduce the power consumption, the freezer used is the Nestle Ice Cream Eco Freezer, which uses natural refrigerants and consume only half the energy of our previous freezer.”

Each freezer can hold four large containers of ice cream, filled with different Nestle ice cream flavours. A display panel on a flexible stand scrolls through the different ice creams available at the kiosk.

There is no built-in point-of-sales system, but its operator could use the WiFi connection to provide cashless payment options.

Mayer added while most of the components used on its solar-powered kiosk are not proprietary, the technology used to bring them all together is patented by Nestle. Nestle can also use the kiosks’ connectivity to monitor the stock and performance of each stall.

Nestle Malaysia’s Nestle Ice Cream business executive officer Teo Heng Keat said that the kiosk is also built to be portable. It can be operated, folded, and unfolded by two people. The wheels on the stall are also motorised to assist mobility.

Teo said that prior to these solar-powered kosks, Nestle had introduced over 13,000 Eco Freezers across Malaysia since 2015.

“Just like the freezers fitted to the kiosks, these use half as much energy as the previous models and run on natural refrigerants,” he said.

“With this technology, we can open an ice-cream kiosk almost anywhere, from beaches to [even] high-traffic locations because it is 100% off the power grid.”

According to the company’s statistics, each of its solar-powered ice-cream kiosks can reduce 263kg of carbon dioxide emissions every year.

Currently, there are two Nestle solar-powered ice-cream kiosks stationed at Sunway Lagoon. Nestle Ice Cream Malaysia intends to roll out more of these kiosks across the country soon.