The joys of CNY 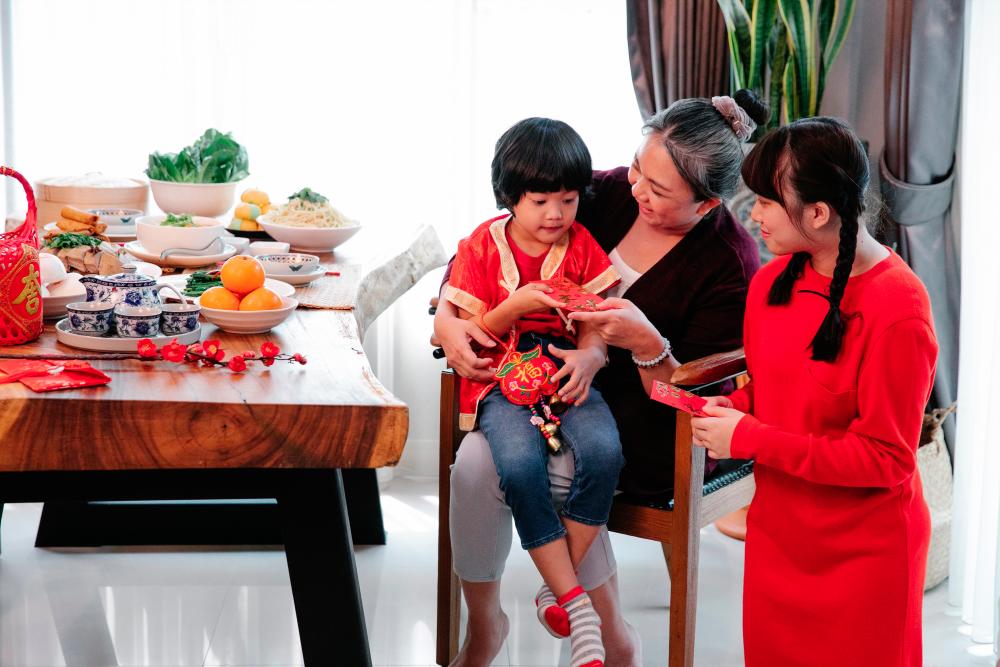 The Lunar New Year is the perfect time to catch up with loved ones. — PHOTO COURTESY OF ANGELA ROMA

CHINESE New Year, also known as the Lunar New Year, is among the most significant celebration for the Chinese community throughout the world. The festive season marks the beginning of a new year on the traditional lunisolar Chinese calendar.

During this festive period, work is postponed and celebrations with loved ones are prioritised instead.

Hence, there are numerous traditions and rituals that are carried out. From the first week preceding the celebration to the 15th day after, these customs are practised by the members of the community to welcome in the new year.

Since the celebration is nearly upon us, we have decided to compile a list of the most popular Chinese New Year activities!

In Chinese culture, the colour red is deemed as a lucky and auspicious colour. Not only is it associated with life and vitality, but it also symbolises happiness, success and wealth. Due to this, members of the community decorate their homes with bright red CNY ornaments to attract prosperity and ward off evil spirits.

To further draw good fortune, homes are thoroughly cleaned one week before the celebration. Floors are swept, furniture are dusted and unwanted things are thrown away.

This is to get rid of any “huiqi” (bad luck) that may have accumulated throughout the whole year. However, cleaning is forbidden on the first day of the celebration to prevent getting rid of newfound luck and wealth.

Of course, what is a celebration without family? In fact, the lunar new year is the perfect time to catch up with your loved ones. Starting from the second day of CNY, celebrants pay a visit to their friends and families to exchange good wishes. For instance, married couples visit the wife’s parents on the second day of the celebration.

And friends meet up to catch up, eat and even gamble. During the visits, celebrants often bring along with them gifts such as local products, food, wine and candies. It is considered impolite to visit someone without offering them a gift.

Aside from visits from friends, family reunion dinners are also a crucial component in the CNY celebration. Regardless of the distance, family members gather to celebrate the festive season together. And a luxurious meal is prepared and served to celebrate each other’s presence.

Among the dishes that are served are dumplings, Yee Sang, and a whole fish. The fish is a must as it represents abundance in both home supply and wealth.

This may be the best part of the entire celebration! Since wealth and prosperity are celebrated, good wishes are expressed in literal wealth. This comes in the form of red envelopes, which are given by the elderly and married couples to children and unmarried guests.

The amount of money in the envelopes varies depending on the giver’s relationship with the recipient. According to Chinese folk culture, the recipients will live safe and sound the entire year upon receiving the packet.

While young adults spend the money to purchase things or pay bills, children often utilise the money for school. Some families even save the cash for their children’s future use.

Next on the list is enjoying a traditional lion dance. Widely seen during this big occasion, the traditional lion dance is performed for good luck as the lion is believed to be an auspicious animal. As a matter of fact, it signifies great power, wisdom, and superiority in Chinese culture.

Thus, the lion traditional dance is performed annually to welcome great prosperity and good luck for the upcoming year. Apart from that, the performance is also conducted to get rid of evil spirits. And sticking true to its name, the performance is carried out by two dancers in a lion costume.

But rather than the typical lion’s form, the costume resembles a pantomime horse. The performers become the body of the lion – one in the front acting as the head and front limbs while the back as the legs.

Typically, the legs of the performer are clad in the same colour as the lion’s body, and the costume may come with shoes that are shaped like the lion’s paws. The performance is also accompanied by a set of beating drums, clashing cymbals, and resounding gongs.

Setting off firecrackers and fireworks

Similarly, to the lion dance, firecrackers and fireworks are essential for scaring off evil spirits during the festive season. As the legend goes, a monster called Nian would eat villagers and destroy their homes during New Year’s Eve. But fortunately, the villagers soon discovered that the demon was afraid of the loud sound that was produced from burning bamboos.

Since then, this has become a tradition for Chinese New Year. Although bamboos have been replaced with firecrackers, the belief of the loud noise remains. Therefore, celebrants set off firecrackers and fireworks annually to scare off evil and welcome the new year.