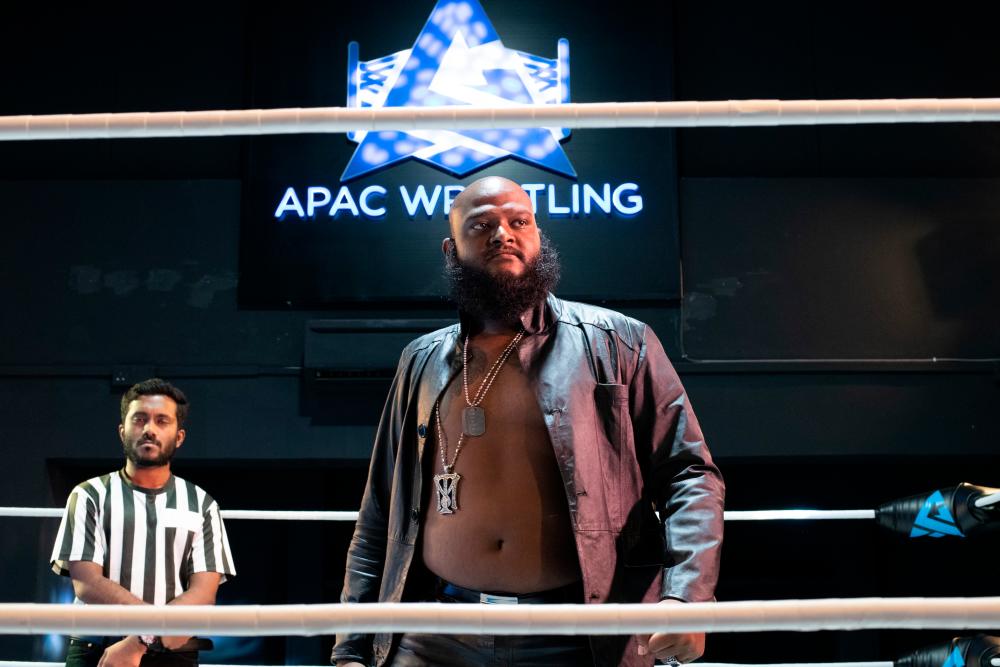 Gotham in the ring.

CLAD in his wrestling gear and sporting tattoos, Gotham is an imposing presence no matter who he faces in the squared circle. However, the real man behind the persona is one of the friendliest folks you will ever meet.

Goutham (his real name) first dipped his toes in the entertainment scene with music, and something he still dabbles in. However, wrestling is his passion and the sport that he credits for saving his life.

How did you get started?

“It started in 2009. I feel comfortable entertaining people, and that is where my heart lies. So in 2009, I got into the music industry. Where I started learning rap from MC Bullet and I was also honing my DJ skills with DJ Fuzz as well at the time.

“I made a few singles, but it didn’t work out with the studio. But I still kept in touch with the producer. He goes by the name MC Bullet of Monsta Village, [we have known each other] for 11 years now.

“In 2014, a WWE event came down to Malaysia, and that is where it started for me. I started watching wrestling in 1997, I idolise the Undertaker.

“After I saw WWE live here ... I wanted to be in the ring. That is how my journey started. I started searching online, even my late father when he was around said: ‘If you need to go to the States, lets get you the funds and get you there’.

“It happened that I managed to contact Ayez Shaukat-Fonseka Farid at the time, and the rest is history.

“I made my debut as a rookie in 2015, and now I am a professional wrestler in APAC Wrestling.”

What is APAC Wrestling?

“APAC Wrestling is a weekly show on YouTube. They put up about three to four pieces of content a week, featuring talents from around the country, and hopefully someday the world as well. We have a few storylines that are running through this week.”

How did wrestling save your life?

“I got into wrestling in 2015. In 2017, my dad passed away. I didn’t take it lightly. To me it was sudden. In the afternoon I was talking to him on the phone. In the evening he was no longer here.

“I was going down a path I shouldn’t. Thankfully I didn’t get into drugs.

“But, I didn’t sleep well, I had breakdowns, and my performance and training were declining. MC Bullet always kept in contact with me, even though I was not signed to any record label yet.

“The closest person whom I always meet weekly for training was Ayez. Even then I took a long break.

“One day I got back into wrestling and that is when reality struck me. I could not do the basic stuff. My world just crumbled. I had no mood to wrestle and train. I asked myself: ‘What am I doing?’

“That is when he pulled me aside. I remember he hugged me and said: ‘Don’t worry, if there is anything you need I’m here for you. You can always reach out to me. Get back to training and get your mind off it. If you need someone to talk to, I am here’.

“He followed up with me despite my performance. He motivated me. And that is when I got my first international booking in Singapore to face Dennis ‘The Ladykiller’ H.

“I am grateful for everything that Ayez has done for me, for never giving up on me, for constantly motivating and pushing me, and in turn never letting me give up on myself.”

How did you come up with the character Gotham?

“When I first got into training, the first thing that was decided was my ring name Gotham, which is close to my real name with only a small difference.

“A week or two before the show Ayez said that he had this character in mind. That’s how it started, this mafia persona. I was his brain child.

“He said if I played it well, a lot of people would click with the character and take it far. I made a few tweaks to it, and that is what people see now.”

What is the one move in your repertoire that you want to improve upon?

“The Spear. It is such a burst of power, but I need to make it more devastating.”

What is the one move that you admire the most?

“The Tombstone. I thought of using it, but no. That’s Undertaker’s move.”

What are the misconceptions about wrestling that you’ve heard the most?

“That the ring is cushioned, and the props are fake.”

“First encounter with Shaukat in 2017. And also being in the ring with Hurricane.”