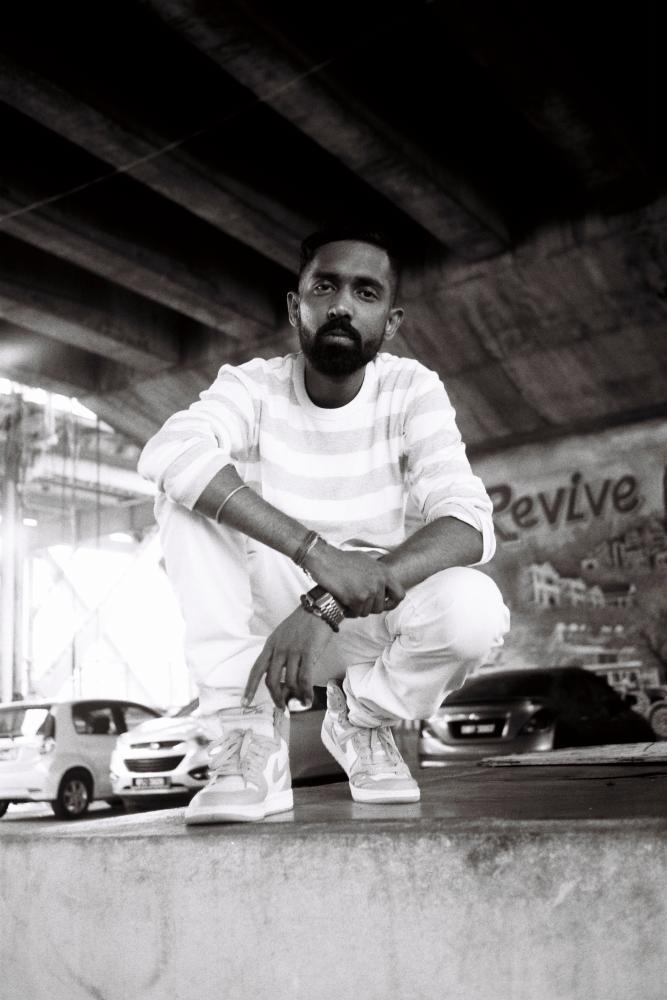 Balan was impressed by the expressive nature of hip hop the first time he heard All Eyez On Me by 2pac. — PHOTO COURTESY OF ATOMSK

BALAN KASH’S rise to stardom is a classic example of the good old saying: “Hard work pays off”.

As a prominent figure in the local hip-hop scene, Balan’s work as a rapper has frequently made headlines.

The Klang native has worked with some of the best producers and his works have topped radio charts.

His hit song Start the Thiruvizha grossed more than 2.1 million views. Aside from that, Balan even had the opportunity to perform for international audiences in countries like Singapore and Amsterdam. Needless to say, his road to success was not paved with roses as many obstacles stood in his way.

Unlike the current vibrant music scene, the local industry back when he started did not have much to operate on.

With no streaming services and exposure to local sounds, the hope of pursuing music was often gloomy. However, Balan used that as a source of motivation to pursue his dreams.

“The more people said I could not do it, the more I wanted to. I remember someone whom I was dating once said: ‘If you get on Hitz, I will shave my head’. So, that motivates you. Because of that, my song was number one on Hitz for 12 weeks in 2015. But it was not an overnight success and it was tough. It progressed bit by bit.”

What was the best moment in your journey?

Working with a world-renowned composer like Anirudh was a major highlight, especially for a Klang boy. The next one would be opening for Kanye West when he came here to perform. But a better highlight would be seeing the local Tamil hip-hop scene become a force to be reckoned with. Since many local Tamil acts are often not celebrated, I consider this milestone a major highlight of my life and career.

What is it about hip-hop that resonates with you?

The whole thing about hip-hop that drew me is that it is very rebellious. The rappers I grew up listening to could voice out what they wanted. And when I first heard All Eyez On Me by 2Pac, I was taken aback because they got to express themselves in a way that no other music could. So, the more I started buying CDs and cassettes, the more I learned that the culture came from a tough spot. It came from a very rough place.

What was the inspiration for your stage name, Balan Kash?

This is due to a number of things that were happening in Kashmir, India that we as Malaysians were not aware of. So, to respect that, I changed my name to Kash. And I have gone through a lot in life. So, I decided to keep my first name, Balan (my real name) and Kash. Nothing too complicated.

What is the source of your inspiration?

I believe you have to hit rock bottom. In life, you cannot just be counting victories. In fact, you have to take your defeats as lessons. So, not every victory should be celebrated. I lost my father at a very young age. I went through severe financial challenges in my 20s and 30s. And I lost everything within six months in 2017. At the time, all I had was family and friends.

So, I never knew I could come out of it. Fortunately, they convinced me not to give up. And then, I started writing again as I was inspired by my wife’s pregnancy and the birth of my daughter.

So, I look at my own life for inspiration rather than reading motivational books. Although they are a source of inspiration, I think your life is a better source, especially when pushing yourself out of a very tough spot.

What can we expect with your upcoming EP, Terima Kasih?

Maturity and life. I think everyone has been producing party hits and music has been so stagnant. Nobody writes lyrics anymore. So, the EP is going to reflect a great deal of life, maturity and realism. This is because materialism does not impress me anymore. I would rather speak about life, especially during these times.

Is there something you would like to change about the industry?

Homegrown radio can start playing more local music rather than international songs. I do not understand why we are making international artistes richer when they are not promoting our music. I do not hear international stations playing Malaysian music. And if our music was not world class, I would not be fighting for it.

So, I think homegrown radio can start by playing more local songs. By doing this, we can enrich the artistes and the ecosystem here. Only then, will people look at Malaysian music with a bit more respect.