Traditional dance with a twist 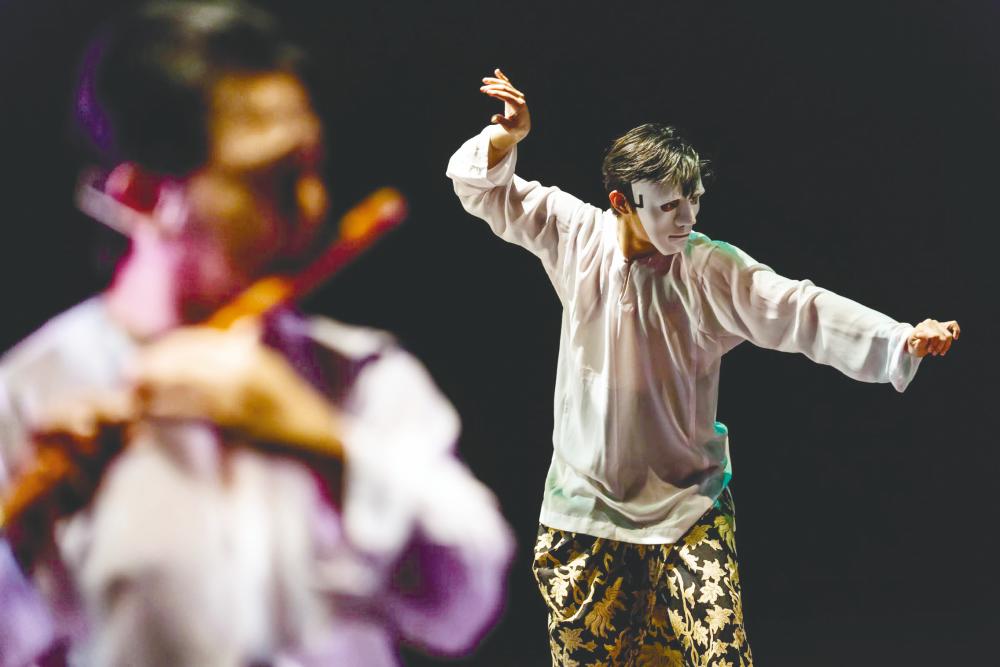 Sujud was an intense performance and MK Ridzuan did not disappoint with his hauntingly beautiful fluting. – CHEW SENG CHEONG

Split into two parts with a four-minute singing intermission by ApisK in between, the performance preluded with Sujud, a stirring experimental piece by Zhafir Muzani, the director and emcee of the show. Before the first dance commenced, Zhafir asked for a moment of prayer and silence for the people who have passed. Though he choked back his tears, he danced his heart and tears out for the audience.

‘Sujud’ is the act of prostrating to God, and the performance seemed to be about oneness with the creator and nature. The dancing was intense and almost animalistic, like insects preparing for a battle. With long pieces of batik cloth strewn in four corners of the stage, the four performers took turns gracing the four corners of the stage, two dancers, a flautist, and a singer. ApisK hummed melodiously and MK Ridzuan did not disappoint with his hauntingly beautiful fluting.

After the emotional first piece, next up was Aku Mau, a Tari Inai-inspired dance choreographed by Dayang Norinah. Bianglala was a prop-heavy performance, but that did not bother me as it allowed the performers to interact with the audience, which was my favourite thing about the event.

I was seated in the second row and enjoyed the intimate setting of the stage and my favourite part of Aku Mau was how they used a round metal tray to reflect the light into the audience, making it all that jarring in a good way.

After a quick intermission break was quirky and funny Tari Terinai (candle dance) inspired dance, Nian by Izzie Islam. Izzie was dressed in a male Victorian nightgown with clown makeup and interacted with the audience, who expressed their enjoyment with roaring waves of laughter. The two dancers were immaculate and I especially enjoyed Xin Ping’s strong lines.

The second act after the intermission was met with some technical difficulties but the show was worth the wait. Choreographed by Yee Teng, a relatively new choreographer, MULAN was surprisingly enjoyable, especially Eling’s part where she danced in front of the lights. The way they played with silhouettes was enchanting, so props to lighting crew Kelvin, but also Yusman Mokhtar, lighting designer and operator for the entire show.

The only performance that fell short was RASO, which I had more expectations for as the closing dance. I would’ve prefered more explanations and intentions behind all the dances, as well as seeing more cohesive and synchronised dancing. Regardless, it was still an enjoyable performance.