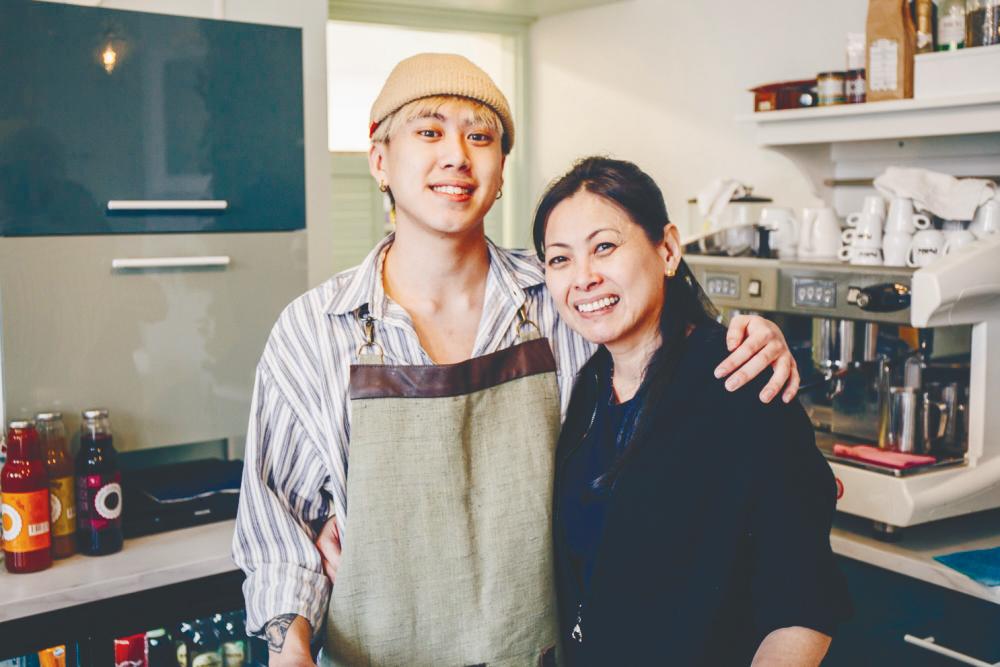 AS the years go by and fashion trends evolve, sometimes styles are recycled as well. This is why thrifting or buying second-hand garments is a popular way to shop for clothes.

Yee Yuin Kit, 25, is the co-founder of Qrated, a thrift clothing business he runs with his partners while also indulging in his other interest as a part-time barista.

How did Qrated come about?

“I’ve been wanting to open a thrift shop since three or four years back, but I wasn’t mentally ready to start it yet. I was modelling part-time and met Jeremy Wong, who was modelling as well. We clicked the first time we met and had a similar style, so we started talking about fashion.

“After Jeremy and I became friends, we went thrifting together, and the idea for an online thrift store came about, since both of us liked fashion. After that, I met Meli Mok through Jeremy and she joined us after we launched the first season of Qrated.

“Yee is mainly in charge of the thrifting aspect of the store, while Jeremy does the designs and Meli takes care of the upcycled and reworked clothing.”

How did you get into modelling?

“A few years ago, a brand was looking for models for their new release when I was working in a cafe. One of my friends encouraged me to try it out since I was into fashion, so I decided to give it a shot.

“After that, I started posting pictures of me styling different clothing on Instagram and slowly, my photographer friends would ask me to model for their shoots. So, that was how I started.”

“At first, it was mostly curiosity. Ever since I was a kid, I’ve been inclined towards fashion. I would follow my mum to shop and even choose outfits for her. I’ve always experimented with fashion to find what my style is. I watched YouTube videos of people in the US thrifting for outfits and getting vintage clothing that you couldn’t get anywhere else. That sparked my interest and that was how I started thrifting.

“Besides that, thrifting is also an inexpensive and sustainable way to try different clothes. I really like the different cuttings and styles you get as they’re clothes from different eras that you don’t see nowadays, which is precious to me as you don’t usually find them in a typical clothing store.

“Overall, it’s a very enjoyable experience for me and you never know what kind of clothing you’d find since most of them are unique pieces that let you stand out.”

“We’re not a typical clothing brand as we have thrifted items, an upcycled section, and we also manufacture our own clothes. For every season that we had, it’s a different concept each time.

“For example, the first season was more of a Japanese/Korean concept, then the second season was athletic wear-inspired. And for our third season, it was an early 2000s concept. That made it hard for us to go with one single concept as each thrifted item can be styled many different ways.

“Since we had many concepts, we decided to rebrand to make everything more coherent and stick with one single concept. So now, it’s a normcore version of our first season style.

“Since the team is made up of the three creative directors, it takes a lot of communication between the team to agree on one concept.”

What takes up most of your mental energy when running your business?

“I would say having to think of new ideas constantly, because it takes a bit of brainstorming to come up with new concepts. Also, the handpicked thrifted stuff is harder to come by now.

“As for starting the business, it was relatively smooth-sailing (apart from) the mental block before actually starting it and taking the first steps. Personally, I think it was because there was still some stigma about dressing up in my hometown.

“Perhaps people aren’t used to seeing people wearing something so different, and that was why my partners and I started Qrated. We wanted to be a platform for people who are into fashion, who might be afraid of the judgments, and to be an inspiration for them to start wearing what they want, to express themselves.”

Yee added that he and his partners intend to have a physical store soon and also expand their online business.

“I hope more people will start thrifting and upcycling because we want to show that you don’t need to wear luxury brands to be fashionable, and to have your own unique sense of style.”

Despite being a culinary graduate, Yee started embracing fashion as a hobby. He grew to love fashion after college and said fashion was the way he built his confidence.

He said being able to explore his many passions such as modelling, photography and fashion allowed the multipotentiality in him to flourish.

“If I had listened to everyone or been worried about their judgments, I wouldn’t be who I am today, and neither would I have my dream business now.”

1.Finland’s energetic push to be carbon neutral by 2035

2.Death in custody cases must be probed by independent panel: Experts

5.US hits Iran with new sanctions for human rights abuses