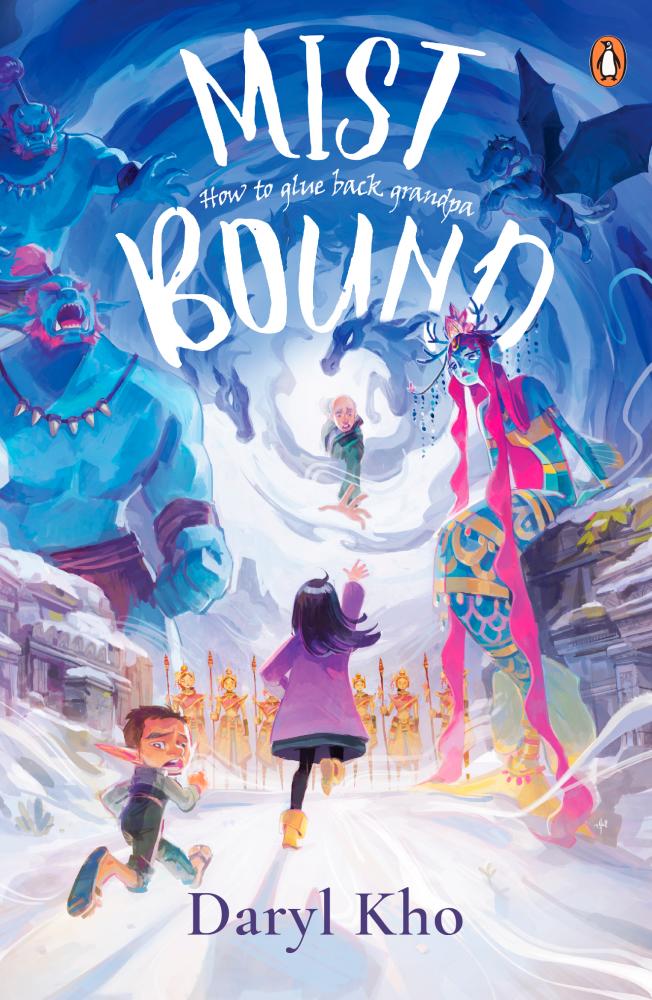 Daryl said Mist-bound is not a sad book, but one that is full of hope, love, imagination and adventure. - Pictures courtesy of Daryl Ho

WRITING has always been a passion for Daryl Kho. He told theSun that in his early years in school, he wrote everything from short stories to plays. But that changed after graduation.

After Daryl joined the corporate world, creative writing seemingly left his world, or at the very least, remained in a state of deep dormancy.

“The only thing I wrote (after work life began) were emails and PowerPoint decks. I even stopped reading except for business books and such,” he said.

After a life-changing, pivotal experience in his personal and family life, Daryl’s creative juices, knack for storytelling and love of words were roused from their slumber.

In 2009, Daryl’s father had a stroke, which caused vascular dementia.

The condition robbed senior Kho of his mobility, health, livelihood and memory.

The events that followed led to Daryl’s debut, Mist-bound: How to Glue Back Grandpa.

From one continent to another and back, Petaling Jaya-born Daryl left secondary school midway in Kuala Lumpur for a Canadian boarding institution and then continued his higher education in the United States.

He graduated just as the dot-com bubble burst and sent him job hunting.

This led to an event that Daryl took as a sign for him to return home.

He called to postpone the meeting, as he was burnt out by all the rounds of interviews.

“The next day, I woke up and New York was on fire,” Daryl said, thanking divine intervention for his decision.

Returning to Malaysia, Daryl worked in KL for two years, after which he was transferred to Singapore.

He made his life there for years, leading up to the events that disabled his father.

Inspired by his parents and daughter, Daryl explained that Mist-bound is very much a fairytale that is based on a true story.

Being close to his father, Daryl was tremendously affected by his father’s dementia. The condition sets in suddenly, unlike Alzheimer’s disease.

“His memories went away, just like that,” Daryl said.

Adding salt to the wound, the stroke occurred several months before Daryl’s daughter, Alexis, was born. His father was looking forward to the birth of the baby girl.

“He had the first stroke around the time when we were looking at the early scans of my wife’s belly. After the stroke and dementia, he was never himself. And in a way, for me that felt like my dad and daughter never got to meet”.

Another inspiration for the book was Daryl’s mom, as she had to take care of her husband. Daryl said being a caregiver is really tough.

“She had to mostly do it all on her own.”

These events, coupled with him finding his old writing passion, which reminded him that he used to know how to write and that he enjoyed writing, were the triggers that brought forth Mist-bound.

As a personal project, Daryl never intended his book to be about dementia or a medical book.

“It started originally as a personal story for my daughter and for me to read out to my dad,” he said.

“I wanted to write her a story about my dad because all this while, I wanted my daughter to get to know my dad before he had dementia. I was trying to paint him in that picture, how he was before, how he was full of stories and life.”

Daryl also came across a quote that served as a guideline for his book: “When an old person dies, a library burns to the ground.”

More than a children’s novel

Although Daryl began Mist-bound with the goal of reading it to his father, the experience never came to pass.

The elder passed away midway through the book’s completion.

Writing the book became an avenue for Daryl to process his grief, guilt and regrets.

Becoming more than a hobby, Daryl’s debut title served as a catharsis. Once he secured a publishing contract, the writer wanted his work to do something beyond just entertain.

The book has started conversations on dementia, and drawn support from Singapore’s TOUCH Community Services and Dementia Singapore, along with Alzheimer’s Disease Foundation Malaysia.

“People who have gone through similar experiences, when they read my book, told me that they couldn’t stop crying and how it has touched them,” Daryl said.