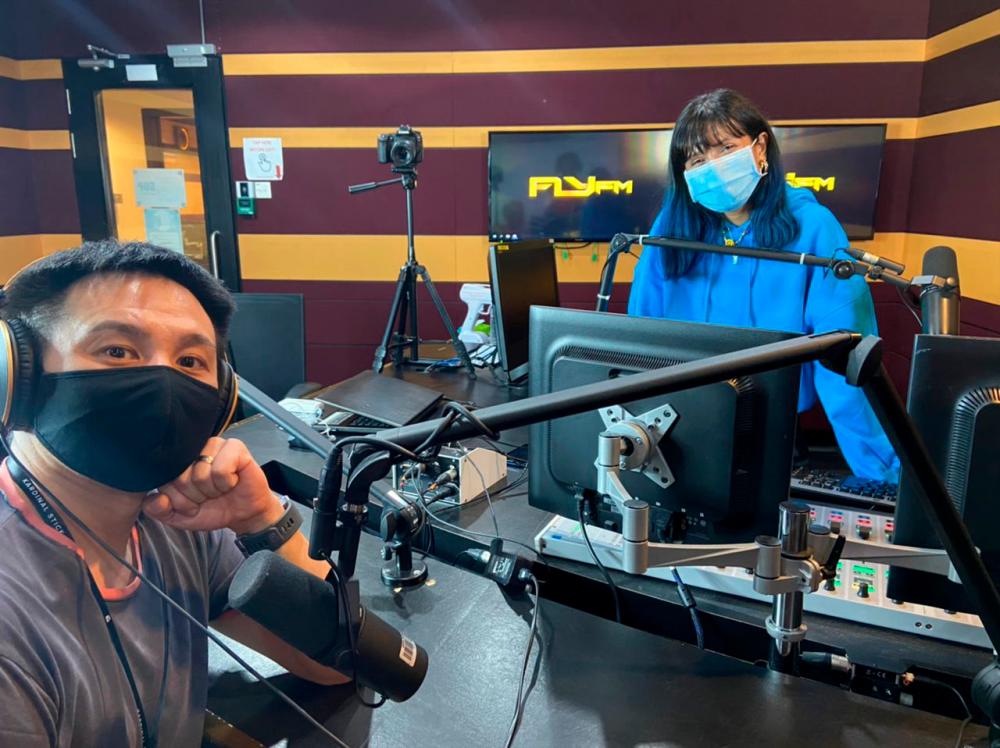 Douglas and Ili at the station. — PHOTO COURTESY OF ILI RUZANNA

WE have all come to know and love Douglas Lim as one of our favourite local stand-up comedians. Since starring in the sitcom Kopitiam, Lim’s innate comedic skills have made him a household name.

But like many “triple threat” artistes, the homegrown performer has also found great success outside stand-up comedy.

Douglas, who first started as a singer-songwriter, has starred in major musical productions over the years. Now, the multi-talented entertainer is making a name for himself as a radio personality.

Since the beginning of this month, Douglas and Fly FM presenter Ili Ruzanna has been bringing joy and laughter to listeners on their new morning breakfast show. Titled Douglas Lim & Ili in the Morning, the show airs every weekday from 6am to 10am.

“I was approached by the bosses of Fly FM. They called and asked if I was interested in this collaboration. Before this, I was approached to be on radio but I declined because I was not ready to sacrifice my time due to my schedule then. But things have changed and I wanted to try something new.”

How was the transition from stand-up to radio?

Douglas: It has been a work-in-progress and of course, not as seamless as you would think. There are many differences and the most glaring are listeners’ tuning habits. For stand-ups, I am able to use my skills of synthesis to its maximum capacity to entertain the same audiences that have been present throughout my show’s length.

But for radio, you are not able to tell when the listeners will tune in. So, that has been the biggest challenge for me, needing my co-presenter Ili to constantly refresh and bring up things that have happened organically so that I can land the punch lines.

How did you react when you heard Douglas was coming on board?

Ili: Honestly, I was shocked and scared because my whole family is such a big fan of his. They have been watching him for ages. Now, when I go home after a long day, my family would not ask me how I am. Instead, they would ask: “How is Douglas?”

That is how incredibly amazing it was finding out that I was going to get to work with him. He is an amazing creative content creator, and it fascinates me what is going on in his mind.

Douglas: Ili is incredibly chirpy, cheerful, hardworking and she is willing to learn. We are learning a lot of different things. Ili is obviously far more experienced in terms of radio as she knows the ins and outs. But because we have marketed Fly FM as a comedy station, I was hired for my comedic skills. I have been learning the format of radio while Ili has been learning how to perform in a comedic setting. Besides being young, Ili is also a professional when it comes to receiving feedback.

Ili: He is an interesting person. Getting to know him on a personal level and talking about life is a pleasure. He is someone who thinks things through. A lot of what he says makes sense. It is interesting to see someone on stage and then get to know him in person. It has been fun and quirky seeing him do things.

He has taught me a lot of things too, like how to tell a story and how to make sure that people understand the story. So people understand that it is a joke when you tell it. Personally, I feel as a radio announcer, we tend to always just read the news. Hence, having that side of storytelling gives you a wider perspective.

Has there been any memorable moments on the show?

Douglas: There was one session when I was talking about the Olympics. From it, I was able to see the kindness Malaysians showed for our national athletes. Even though they did not win, there was a lot of positivity shown their way. And these are the same people who can be very critical when it comes to the current affairs in the country. So, that was quite an enlightening moment for me.

Ili: I would say teaching Douglas how radio works. I think he has yet to fully grasp how it works. As he earlier mentioned, he has yet to fully understand the mechanics of how listeners tune in and out of the show. I have been teaching him how the job of announcers involves constantly recapping our stories. This is to ensure listeners who have just tuned in will not be lost in our conversations.

Will there be any upcoming surprises that listeners can look forward to?