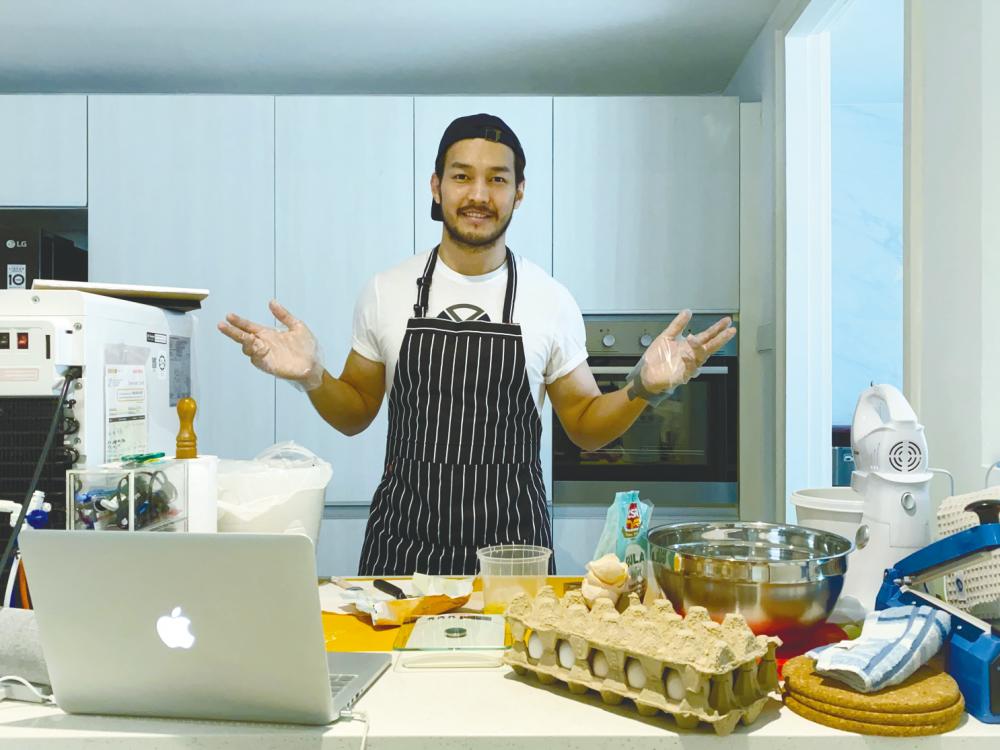 John turned his baking skills into a business. – Pictures courtesy of John Tan

THERE is more than just scrumptious bananas, cempedak and raisins among the spectrum of ingredients in Tan Wei Jun’s cakes and cookies.

“I bake with passion, honesty and a lot of love,” declared the handsome actor, known professionally as John Tan.

The actor started his online baking business just a few weeks ago, and in no time, has conquered social media with his simple but moist and tasty signature desserts.

The ongoing lockdown has rekindled John’s childhood love for cooking and baking. In fact, he learnt to make kuih kapit and beehive cookies at the age of nine but never took it further, until now.

“The situation has pushed my limits, so I started baking,” he said.

“I love cooking and preparing food. I enjoy going to the market, picking up fresh ingredients like seafood, greens, dry food and fruits.”

The pandemic has forced the cancellation or postponement of television programmes and theatre shows.

John, who is also a fitness trainer, also could not go to the gym, leaving him with a vast amount of free time.

“The two industries that I am involved in, entertainment and sports, have been badly affected,” said the winner of the Best New Actor award at the 29th Malaysia Film Festival.

He debuted as an actor in the award-winning Hokkien language film You Mean The World To Me in 2017.

John was set to appear in a stage play A Streetcar Named Desire, directed by Joe Hasham, but that has been rescheduled several times due to the rising Covid-19 cases.

“The first few months was still okay. Then, it got worse as I lost my source of income after the lockdown period was extended. It has become longer and longer, like there is no end of the tunnel.”

Then, a group of his friends had a conversation about the situation they were facing.

“We talked about everything from plans, ideas, imagination and possibilities in life.”

The ultimate question was: “What if one day you can’t do this (acting, hosting) anymore? What else would you do if you have no other choice?”

The discussion inspired John to cultivate his hidden talents and explore other possibilities.

There have been occasions when he had made small quantities of beehive cookies and kuih kapit for family and friends, including a neighbour who produces many of his TV shows.

“One day, I baked a banana cake and she loved it,” he revealed.

“Small, great things always start from sharing with others.”

On July 1, John decided to realise his ideas and do something.

“It’s a special month because my birthday is in the same month,” said John, who turned 32 on July 29.

He began his BaoBao by John Tan endeavour with rum and raisin buttercream cookies and moist banana bread cake with a crusty top, decorated with sliced bananas.

John, a cempedak lover, also made his signature buttery-
rich cempedak cakes, generously filled with fresh cempedak puree and chunky flesh on top. The cake has a distinct aroma, taste and texture as he only uses quality ingredients.

“I use 100% pure ingredients, like pure butter, kampung eggs, premium-grade fruits I handpick, and most importantly, I do not stock up on fresh ingredients,” said the actor-turned-home baker. “Instead, I go to the market every day to replenish the ingredients.”

His fans raved about his freshly-baked cakes and orders started rolling in.

One customer posted: “If you haven’t tried Cempedak Cake from John Tan, you don’t know what you are missing.”

Apart from baking, John covers all bases from photography to creating content for social media, marketing, sales and customer service. Sometimes, the actor gives customers a pleasant surprise by delivering his cakes personally, much to their delight.

“I got to learn and do everything on my own. Besides, one must put 110% effort and passion to deliver a great product,” he added.

While baking is satisfying yet tiring, the constant stream of positive and encouraging feedback continues to motivate him to keep baking.

“Baking is the new workout session for me,” he quipped.

Despite the challenges, John plans to develop a brand but may re-work the operation mode.

“It would depend on demand or market potential. There are possibilities to explore and expand the product and the scale of business,” said the marketing management graduate from Universiti Sains Malaysia.