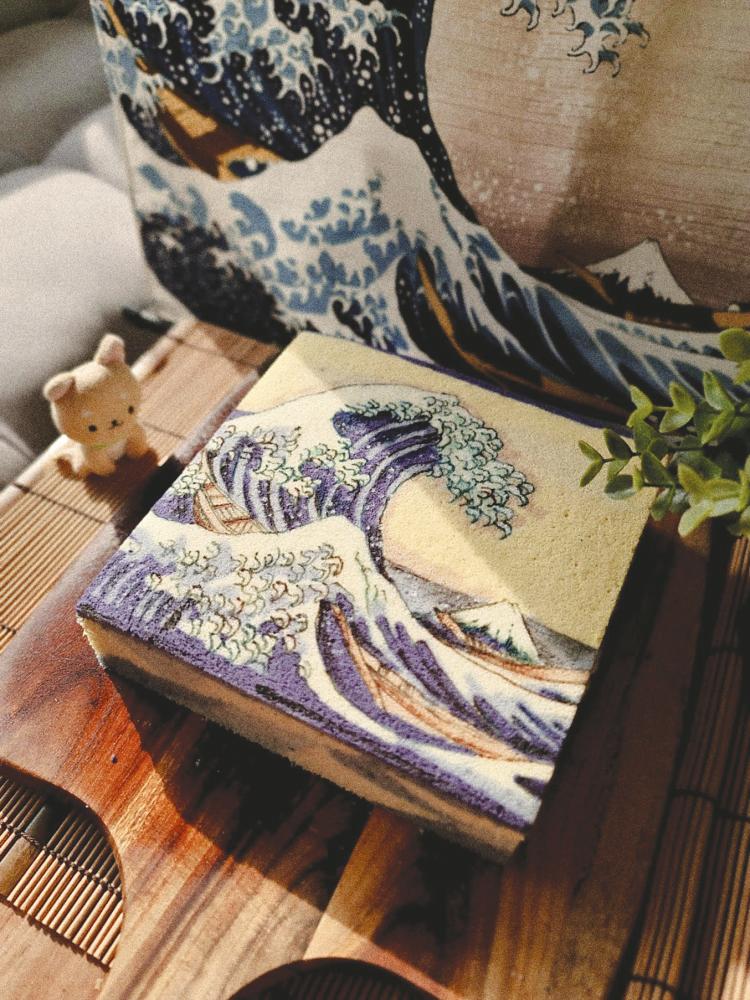 Ooi Hooi Keem, better known as Keempossible, is happy to admit her work was influenced by her mother Tye Cheah Peng, a Chinese brush painter.

She has been drawing incredible art with attention to detail since childhood, thanks to the family streak.

However, Keem works in a medium of her own – flour, or more precisely, cakes.

“I was so obsessed that I began to practise really hard, trying to make my cakes better, in terms of art and texture.

“It was good timing. At the age of 51, I feel I have more patience and creativity inside me,” said the classical piano and vocal (soprano) teacher, who has been instructing for 35 years.

Keem dislikes decorating cakes with frosting, which led her to create her own style of “cake art”.

She learned the Japanese design technique and later, elevated the drawings to a new level with her limitless creativity.

“I call it Pattern Cake as the designs are created on cake batter. First, I draft a print of a pattern on a piece of paper as a ‘template’ on the baking pan.

“I then bake the first bottom layer (for a few minutes) but not completely bake the layer,” said Keem.

“Lastly, I pour the rest of the batter for the sponge cakes over the design and finish baking. Voila, the Pattern Cake is ready.”

But there are more surprises, inside.

Keem can go a step further and create an abstract inlay design of the cakes with coloured batter. This is done through the layering method, and sometimes with cream filling.

Apart from various shapes and sizes, Keem chooses fascinating subjects to paint. These include flowers, patterns, cartoon characters and even portraits such as one she did of American politician Bernie Sanders.

“The picture of Bernie Sanders sitting on a wheelchair pose is iconic. Due to the timing and the situation, the world went viral with his meme. So, I thought I would join in the fun and draw
his portrait on my cake roll,” Keem said.

“I also create my own characters in my paintings. It’s painting on a cake and not paper, wood or other materials,” she revealed.

“It’s totally an unusual ‘canvas’. Therefore, each character, stroke and colour combination painted on a cake, is one-of-a-kind.

“It is more like a journey of discovery as I create one after another, learning from each imperfection for the next,” added Keem.

“Every experience influences the next, as with every creation.”

The most challenging part is the colour coordination and the intricate skills and techniques required to bring art and cake into one creation.

Keem cites her most difficult task as a cake based on the “Great Waves Off Kanagawa”, a masterpiece by Japanese ukiyo-e artist Hokusai.

Keem started to bake with the purpose of bringing joy to others.

”Every cake I bake goes to someone eventually, and whoever receives it, I hope would feel happy. It’s like sending a greeting card to someone.”

“I had flavours such as vanilla, Belgium chocolate, matcha and strawberry filling. However, due to overwhelming orders, I couldn’t manage. So, I decided to standardise it with just vanilla flavour.“

Keem says she loves to take on new challenges in life.

“Exploring creativity will be something that I look forward to in the future, as there is no end to how beautiful a piece of art can be. Colours have so many tones and hence, the combinations are infinite.”