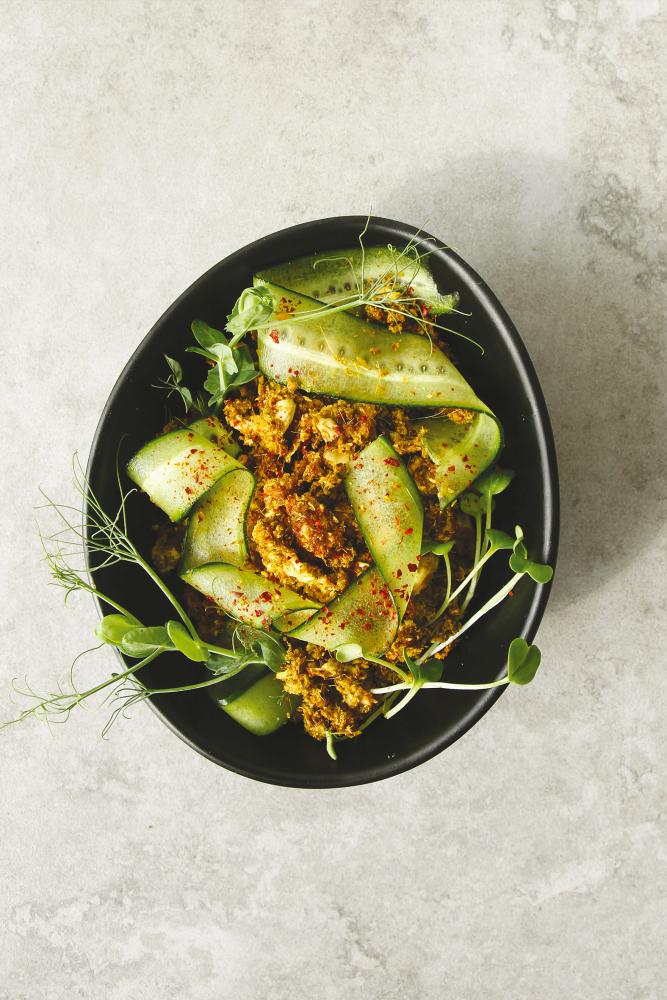 BOEY Yin Yin adopted a totally meat-free diet with one slogan – “turn adversity into opportunity” – and purpose in mind: to overcome eczema.

The debilitating skin problem had plagued her life for more than three decades,
said Raw Chef Yin, as she is professionally known.

She became a certified raw food teacher and chef after her long battle, and shares her experience and recipes to help others reduce or heal diseases through eating healthy raw vegan food.

“Health was the main reason I embarked on a raw food journey,’’ she said.

The author of Malaysia’s first bilingual raw vegan desserts book claims she was completely cured after she went on a raw vegan diet.

“I used to fall sick with cough and cold, every month, but that stopped because of a raw vegan diet,” she says.

“It naturally supports
the immune system and decreases inflammation.’’

“Surprisingly, raw vegan food is actually gentle on my digestive system. Digestion is faster and more comfortable. I felt a clear increase in my energy level,” said the 48-year-old certified raw food teacher.

The law graduate and former communications practitioner is passionate about Asian raw food and loves to add her own twist while creating an array of savoury and sweet desserts.

When and why did you become a vegan?

In the early 1990s, I became aware of how meat wasn’t good for our bodies – I read about it in books and articles.

So, I started cutting it out from my diet. I was more or less pescetarian, eating mainly vegetables and fish or seafood.

I believed that I needed to have protein and had to get that from fish.

In 2014, I made my very first fully raw vegan meal and the next year, I started transitioning from pescetarian to vegetarian to fully vegan by 2016.

What inspired you to become a vegan chef?

In July 2014, I stumbled upon the blog “This Rawsome Vegan Life” and saw a fully raw meal recipe – a lasagna with cashew cheese and broccoli sun-dried tomato pesto. It took me two hours to make the meal compared to my usual
30-minute Chinese stir-fried lunch.

What surprised me was that I didn’t feel bloated, ill, or lethargic after the meal. All my life, I was used to feeling uneasy or ill soon after eating.

But this time, I was energied and alive.
Most of all, the raw lasagna was extremely delicious!

Since then, I have been on a quest to learn how to make the most awesome raw food recipes, ever.

Instantly, I was attracted to the photos of raw food on his Instagram page.

I signed up for my first course Everyday Raw Express and learned to make a variety of dishes – all raw, beautiful and absolutely delicious. It was a significant milestone in my raw foods journey.

When I found out I needed to go to Thailand for work, I jumped at the opportunity to learn at chef Kenney’s academy in Hua Hin, the world’s first classically structured raw and plant-based culinary school.

After completing three courses, and with the experience of making raw meals for one and half years, I decided to conduct simple raw food workshops under the name Raw Chef Yin.

I am glad to inspire others to take a creative look at plant-based food and share my raw food knowledge.

I love how raw meals gave me so much energy.

I created an Instagram account, specifically for my raw food meals to document my journey, including Christmas dinner recipes, such as zucchini tartare, mushroom nut burgers and Fig Water Kefir.

Since 2016, I have come up with raw food creations with a strong Malaysian touch, such as durian pie.

I want to tap into local resources and teach and encourage others to appreciate local produce.

What is the must-have ingredient for your vegan cooking?

Currently, I am studying local herbs and edible leaves that are found in abundance in Malaysia and I include them in my raw food recipes. I really enjoy using edible leaves such as ulam-ulam.

Some of my raw Malaysian recipes include ciku pudding with dragon fruit coulis, Malaysian mango salad dressing, and lacto-fermented belimbing buluh. The aim is to encourage more Malaysians to recognise the value of local ingredients rather than rely on imported ones.

I would like to collaborate with other chefs and keep inspiring people to become vegan.