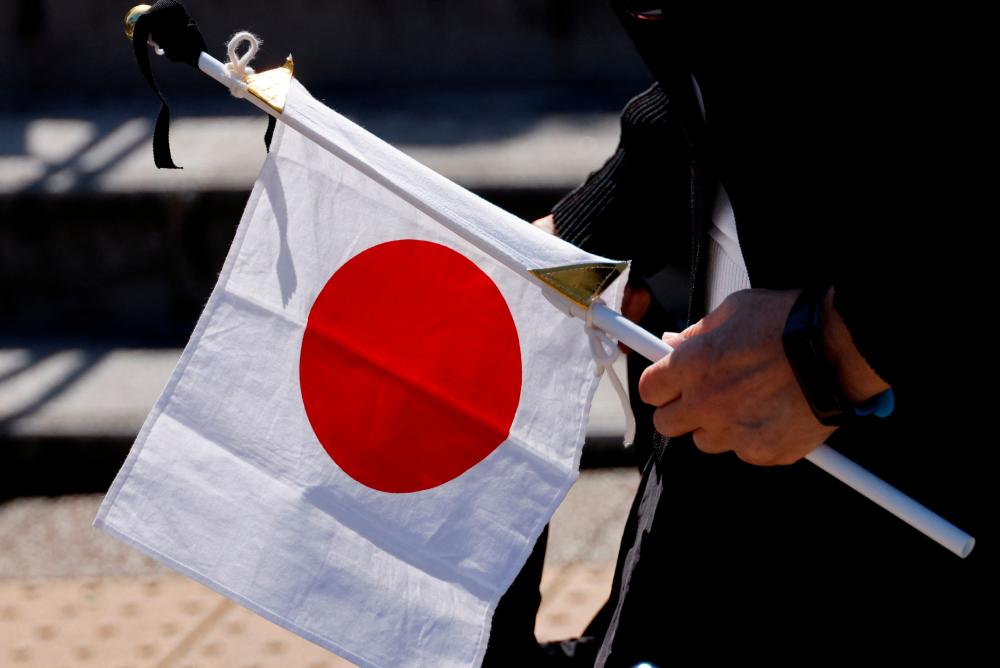 A mourner holds a Japanese national flag with a black ribbon attached to it as they pay their respects, near Nippon Budokan Hall, which will host a state funeral for former Prime Minister Shinzo Abe, in Tokyo, Japan September 27, 2022. REUTERSPIX

KUALA LUMPUR: July in Japan sees summer getting into full swing; the rainy season has ended in most parts of the Land of the Rising Sun and the temperatures continue to rise.

But tragedy strikes when you least expect it.

On the fateful Friday morning of July 8, the world was rocked by news that former Prime Minister Shinzo Abe died after being shot twice while delivering a campaign speech in the western city of Nara. He was campaigning for the ruling Liberal Democratic Party (LDP) ahead of legislative elections on July 10.

“On that July 8, the midsummer sun rose, but was doomed to set at midday,” said former Japanese Ambassador to Malaysia Dr Makio Miyagawa in his opening remarks during an exclusive interview with Bernama recently.

As Miyagawa spoke, this writer could feel the affection and warm presence of Abe, once described as “one of the world’s most recognisable statesmen” by the Financial Times.

Miyagawa, who served as Japan’s envoy to Malaysia during Abe’s long second term from end-2012 to September 2020, was sharing his thoughts and experiences with Abe during his stint here.

Abe who died in the early evening hours at the age of 67, was the longest-serving Japanese prime minister in history.

Hundreds of foreign dignitaries are expected to attend his state funeral, which will be held on Sept 27 at the Nippon Budokan Hall in Tokyo.

“Abe & Malaysia in my memory”

Miyagawa, who was then Foreign Ministry Director-General in charge of the Middle East, could vividly remember the privileged moments of spending very long hours, sharing views with Abe, who was renowned for his far-sighted foreign policy.

“Abe was convinced that there should be commonalities between the ethics of Japan, striving to build a nation in the corner of the Orient for centuries, and the values widely shared in the international community, despite frequent misunderstandings and conflicts between them.

“This conviction was embodied and postured in his foreign policy-making that sought to strengthen our relations with countries in the Middle East as well,” he said.

After returning to power in 2012, Miyagawa recalled, Abe made no less than four official visits to countries in the Middle East, where Japanese prime ministers had been absent in the previous seven years.

According to Miyagawa, “His willingness to receive an honorary doctorate (in political economics) from the International Islamic University of Malaysia (IIUM) in March this year was based on his appreciation of the unique role this higher educational institution has played in Asia, the Middle East, and in the whole world, offering knowledge and technologies to students as well as opportunities of exchanges amongst the youth with diverse cultures.”

The 71-year-old former diplomat pointed out Abe’s affinity for Malaysia had stemmed from his positive impression of its LEP.

Interestingly, it provided a golden opportunity for Japan to be reappraised in the whole Asia and beyond, where antipathy prevailed particularly in some early years after the end of the Second World War.

Miyagawa even shared many unknown facts about Abe, who was undoubtedly a leader who always ‘walked the talk.’

“When a Malaysia Airlines flight mysteriously disappeared in 2014, it was Abe who instructed the swift dispatch of search and rescue forces from Japan.

“Under his quick motion of instruction, only within three days did several airplanes from our Self-Defence Forces and the Coast Guard arrive in Kuala Lumpur, with some ships already sailing swiftly through the vicinity of Taiwan heading for Malaysia,” he said.

Not many knew that it was also his willingness and determination who decided to give approval, for the first time in the Japanese educational history since the 1868 Meiji Restoration, to the establishment of a branch campus of a Japanese national university abroad.

Malaysia will be the first country to have a Japanese university branch on its soil.

It is believed to be the first Japanese campus anywhere overseas, after talks kicked off at the end of 2018 following a request from Malaysia’s then Prime Minister Datuk Seri (now Tun) Dr Mahathir Mohamad and supported by Abe.

“As you can well imagine, he made this decision because it would be in the nation of the original LEP where the branch will be newly opened soon.

“It was his firm belief that education provided opportunities for development,” said Miyagawa, noting that Abe decisively gave his approval especially with matters related to Malaysia.

Some of the pillars of his governing included Japan’s economic revitalisation with a robust economic policy dubbed “Abenomics” to pull Japan out of the doldrums economically that expanded female employment and sustainable growth. He proposed these reforms soon after holding office for the second time in 2012.

According to Miyagawa, noting that Abe himself was an archery player in his university days, “Till he revitalised our economy, the 15 years of deflation had gripped our nation in stagnation. It had withered our people away, who had lost hopes for the future, discouraged them to invest and seize new business opportunities.”

“The youth had lost hopes for their future. About 9.6 per cent of young people felt the future would be better than the present, this figure being the lowest among the Group of Seven (G7) countries. Some said Japan was gone, and would never rise again.

“With the sluggish birth rate and declining population, many even argued that growth was no longer necessary for Japan,” he said.

But the situation took a turn for the better when Abe regained power in the December 2012 general election and immediately began to implement his economic revitalisation policy - all of the “Three Arrows”.

Under Abe’s administration, Japan’s gross domestic growth (GDP) grew by 10.9 per cent in the past decade, a stark contrast from the 2.5 per cent growth in the stagnation decade.

Despite criticisms against Abenomics, Miyagawa said Abe undertook a step-by-step approach in rebuilding Japan to reflect his pragmatism.

Concurring with international reports and analysts, Miyagawa said there was no doubt that Abe had worked hard to revise the country’s pacifist Constitution to have a fully functional defence that included offensive military capabilities.

“He confessed why he decided to aim for the second term administration. During his first term, Abe developed a chronic intestinal disease, hence had to give it up within a year, and he was thought to be over as a political leader.

“He felt that he could no longer exercise leadership and admitted that it had been his sole fault,” he said.

But what inspired Abe was actually the Tohoku Earthquake Disaster in March 2011, Miyagawa said.

“Many Japanese helped each other and worked hard for reconstruction. Watching them at the sites to offer voluntary assistance, he realised that ... “if you think you are over, you have no choice but to stay there.

“Nevertheless, if you think you can move forward, ways are infinite, and possibilities spread like a boundless ocean,” shared Miyagawa on what he heard from Abe in person on the disaster.

Miyagawa’s personal account of the late premier has left a strong impression on this writer, who did not have the opportunity to meet Abe in person during her career as a Bernama journalist covering international affairs.

Born in Tokyo in 1954, Abe was born into a politically prominent and wealthy family. His father Shintaro Abe was foreign minister, his great-uncle Eisaku Sato was prime minister, as was his grandfather, Nobusuke Kishi.

Abe’s death sent shockwaves reverberating across the world. He leaves an indelible mark in Japan’s history and a huge void in the hearts of many. - Bernama