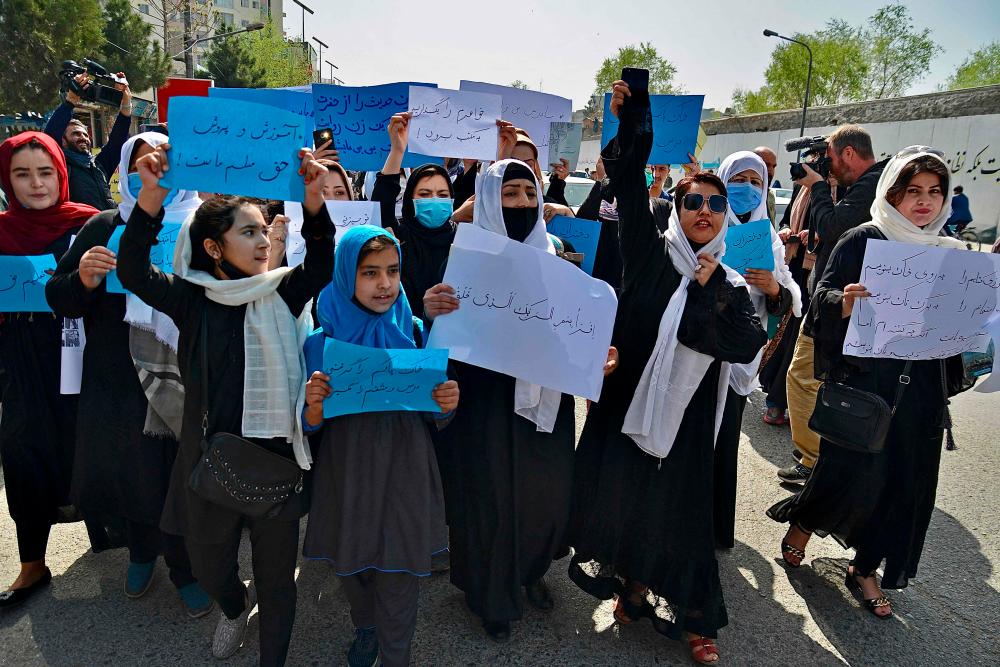 Afghan women and girls take part in a protest in front of the Ministry of Education in Kabul on March 26, 2022, demanding that high schools be reopened for girls. AFPPIX

KABUL: About two dozen Afghan women chanting “bread, work, freedom” protested in the capital on Sunday against the Taliban’s harsh restrictions on their rights.

Since seizing power in August, the Taliban have rolled back the marginal gains made by women during the two decades of US intervention in Afghanistan.

“Education is my right! Reopen schools!” chanted the protesters, many of them wearing face-covering veils, as they gathered in front of the ministry of education.

Demonstrators marched for a few hundred metres before ending the rally as authorities deployed Taliban fighters in plain clothes, an AFP correspondent reported.

“We wanted to read out a declaration but the Taliban didn’t allow it,“ said protester Zholia Parsi.

“They took the mobile phones of some girls and also prevented us from taking photos or videos of our protest.”

After seizing power, the Taliban had promised a softer version of the harsh Islamist rule that characterised their first stint in power from 1996 to 2001.

But many restrictions have already been imposed.

Tens of thousands of girls have been shut out of secondary schools, while women have been barred from returning to many government jobs.

Women have also been banned from travelling alone and can only visit public gardens and parks in the capital on days separate from men.

They were ordered to conceal themselves completely, including their faces, should they need to go out in public.

The decree, which triggered international outrage, carried echoes of the Taliban's first reign, when they made the all-covering burqa mandatory for women.

The Taliban have also banned protests calling for women's rights and dismissed calls by the United Nations to reverse their restrictions.

Some Afghan women initially pushed back against the curbs, holding small protests.

But the Taliban soon rounded up the ringleaders, holding them incommunicado while denying they had been detained. - AFP