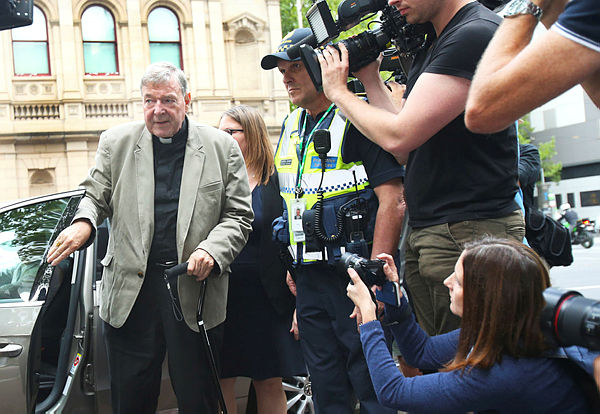 SYDNEY: Dozens of Australian reporters and editors may face jail sentences for their coverage of Vatican Treasurer George Pell’s child sex abuse trial after being issued with legal notices asking why they should not be charged with contempt of court.

Pell was found guilty in 2018 of abusing two boys, but a court suppression order prohibited media from reporting about the trial at the time to ensure Pell a fair second trial on further abuse charges. Those additional charges were dropped on Tuesday, allowing the suppression order to be lifted and media reports of the trial to be published.

The suppression order had applied throughout Australia “and on any website or other electronic or broadcast format accessible within Australia”.

However, when Pell was found guilty on Dec 11, some Australian media ran headlines, including one that said “CENSORED”, and articles referring to a trial where an unnamed high-profile person was convicted of a serious crime that could not be reported.

County Court of Victoria Chief Judge Peter Kidd, who oversaw the Pell trial, made his displeasure with media coverage clear two days after the verdict, calling a hearing with state prosecutors and Pell’s defence team.

“My thinking at the minute... that given how potentially egregious and flagrant these breaches are, a number of very important people in the media are facing, if found guilty, the prospect of imprisonment and indeed substantial imprisonment,“ Kidd said. The lifting of the suppression order means his comments can now be made public.

Victoria’s The Age newspaper on Tuesday said that the state’s Director of Public Prosecutions (DPP) had issued 32 show cause notices to its journalists and other mastheads owned by parent Nine Entertainment Co asking them to explain why they should not be charged.

“We did and we deny the allegations made,“ a Nine spokeswoman said when asked by Reuters if the company had received a notice. Due to the suppression order, it is unclear when the legal notices were issued.

“We stand by all of our coverage and our actions in this matter. We have responded to the DPP strongly contesting any suggestion of wrongdoing on our part,“ she said in an emailed statement.

News Corp, which has newspapers and TV stations in Australia, declined to comment.

The court’s suppression order was issued to prevent potential jurors in a second Pell abuse trial from being prejudiced by media reports of the first trial.

However, some overseas media not covered by Australian law, published Pell’s guilty verdict and it was widely discussed on social media.

A spokeswoman for the New York Times said it had not received a show cause notice. The Daily Beast and the Washington Post did not immediately respond to requests for comment.

The Catholic News Agency, which reported the verdict in December, did not respond to a request to comment.

During Pell’s trial, members of the public could watch proceedings in open court, and attended the handing down of the verdict. But as they walked into court, there was a copy of the suppression rules on the door of the court.

“Obviously there can be tension between the principle of open justice, which is what we have, and the principle of a fair trial,“ said Kerry O’Shea, public affairs manager at the Law Institute of Victoria.

“The actual trial is proceeding in open court, it’s just that the proceedings themselves cannot be reported by the media,“ she said.

The order in the Pell trial was very broad, preventing reporting of any detail of the first trial, including its existence, until the verdict in the second was known. The order was requested by the prosecution, and supported by the defence.

“I think that’s actually a misconception in the community that there has been this order that’s been granted to protect Pell in some way, but in fact that’s not what’s happened,“ said Jason Bosland, deputy director of the Centre for Media and Communications Law at the University of Melbourne.

As well as aiming to ensure a fair trial, suppression orders can be issued for reasons such as national security, to protect a particular victim or witness, or specific parts of evidence presented in a case.

Bosland said Victoria’s use of suppression orders was high compared to other Australian states, possibly because of trials related to Melbourne’s long-running ‘gangland war’, which has seen multiple, inter-related trials drawing on the same evidence or other connections. — Reuters 4.Risk of blood clots in lung doubled for Covid survivors