After death-defying mine escape, India village prays for ‘rat-hole’ miracle 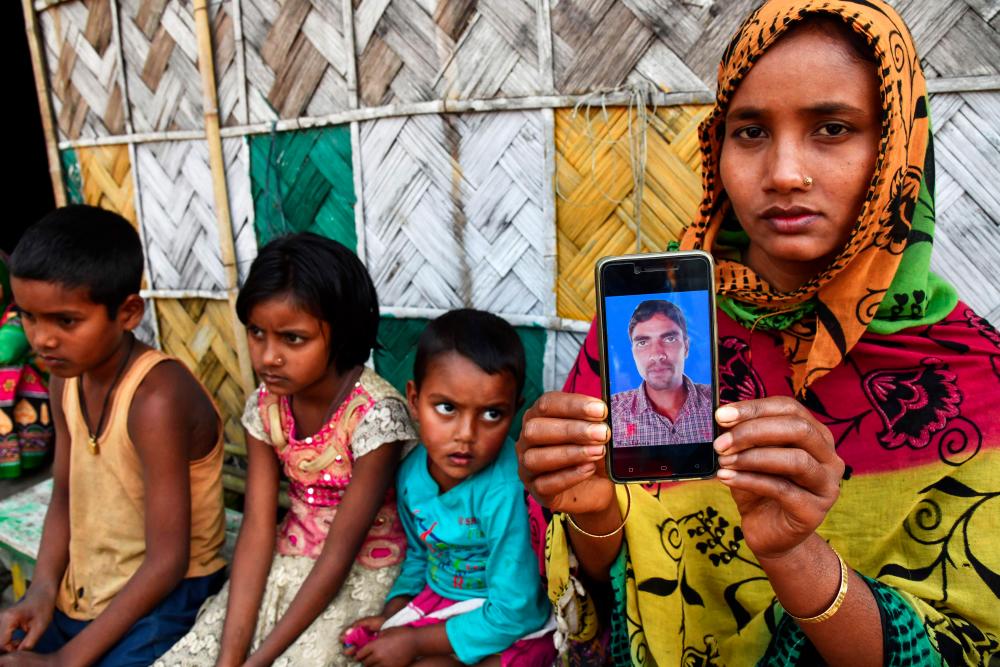 In this picture taken on Dec 30, 2018, Sajeda Khatun, wife of Saher Islam, who is still trapped after an illegal coal mine became flooded on Dec 13, shows her husband's photograph on her mobile phone as she sits with her children at her house in Bhangmari village in Chirang district of Assam. — AFP

BHANGNAMARI, India: Saheb Ali felt an icy wind, saw a wall of water hurtling towards him and desperately held on to an electric cable to avoid becoming one of the 15 men trapped for more than two weeks in a remote Indian mine.

The missing workers were cut off when water from a river poured into the illegal Ksan mine — a disaster that has made headlines amid increasingly desperate efforts to save the group.

Among them were three of Saheb’s friends — fellow so-called “rat-hole” miners from the same impoverished village — whose fate he managed to escape and who he fears may now be dead.

“It has been a long time. I do not think they are alive. But no one knows the might of Allah, a miracle is possible,“ said 21-year-old Saheb, one of an army of migrant workers who toil at Ksan and other clandestine operations.

Saheb’s village of Bhangnamari in Assam state is 400km from Ksan, but has paid a heavy price in India’s latest mining catastrophe.

The miners’ families share the outrage expressed over the snail-paced rescue at the mine in the Jaintia Hills district of northeastern Meghalaya state.

Indian Navy divers were belatedly brought in at the weekend along with scores of emergency workers, engineers and heavy-duty machines to pump out the water.

Work started as usual before dawn on Dec 13 at Ksan, Saheb recalled in an interview with AFP.

At least 20 men went down 115m into the shaft where coal was being mined in defiance of a court ban.

Most had to hack out coal and load it onto carts which Saheb and four others then hauled back to the central shaft.

Ksan is a more sophisticated version of India’s notorious “rat-hole” mines. Most are just rudimentary holes dug into the sides of the Jaintia Hills, some barely four feet in height.

“I was pulling a wagon from a chamber when suddenly I felt a cold wind followed by the roar of water,“ said Saheb.

“’Where is the wind coming from?’ I shouted. I had never felt such a force inside the mine.

Seconds later, he saw a deluge coming towards him. “We shouted for help but we knew no one would hear us,“ he said.

“Me and four others grabbed electric cables hanging from the shaft roof and managed to stay on the surface.”

Frightened, Saheb said he had to fight to stop being dragged under the quickly rising water.

The deluge carried the five men almost 100 feet up the shaft, where they miraculously saw the mine lift coming down, with one man inside.

“He somehow pulled us one after another into the box and we made it to ground level.”

Saheb said he can still not believe his luck but fears for Saher Islam, Monirul Islam and Amir Hussain, all friends from Bhangnamari.

They had been working as miners in Meghalaya for five years. As a labourer in Assam, Saheb said he earned 300 rupees (US$4.50) a day, a fraction of his mining wages of 2,000 rupees.

Poverty and a lack of jobs has forced thousands of migrants to risk their lives as rat-miners in Meghalaya.

“I have three brothers and four sisters to look after besides my mother. I need to earn more money,“ Saheb said.

“My mother has asked me not to work in mines again.” But other jobs do not pay enough. “I do not know what to do.”

A federal environmental court banned mining in Meghalaya in 2014 because of the pollution threat to water sources and the risk to the miners. Scores have died in similar accidents in recent years.

But rat-hole mining has remained rampant while the owners and the state government take the case to India’s Supreme Court.

The brother of Saheb’s friend Saher Islam said Saher had signed up for the dangerous work to earn money to repay debts worth 200,000 rupees.

“We do not know what will happen now, we are a large family. Saher has his wife and three small kids,“ said Shah Alam Sheikh.

Mohammed Abdul Mia, Saher’s father, blamed the delayed rescue effort, saying: “If the government had taken proper steps earlier to rescue them, I would have got my son back”.

“Now I want the government to bring their bodies out so we can give them a proper burial.”

Authorities say it had taken time to get men and machinery to the remote village.

Amir Hussain, another of Saheb’s friends, has a wife and three children.

“He spoke to me on Dec 13 before going to work. He sounded very happy. He told me that he will quickly send some money,“ Hussain’s wife Obijan Khatun told AFP.

“Is there any chance they are alive?” — AFP