Amid heatwave, ‘exhausted’ birds falling from sky in India 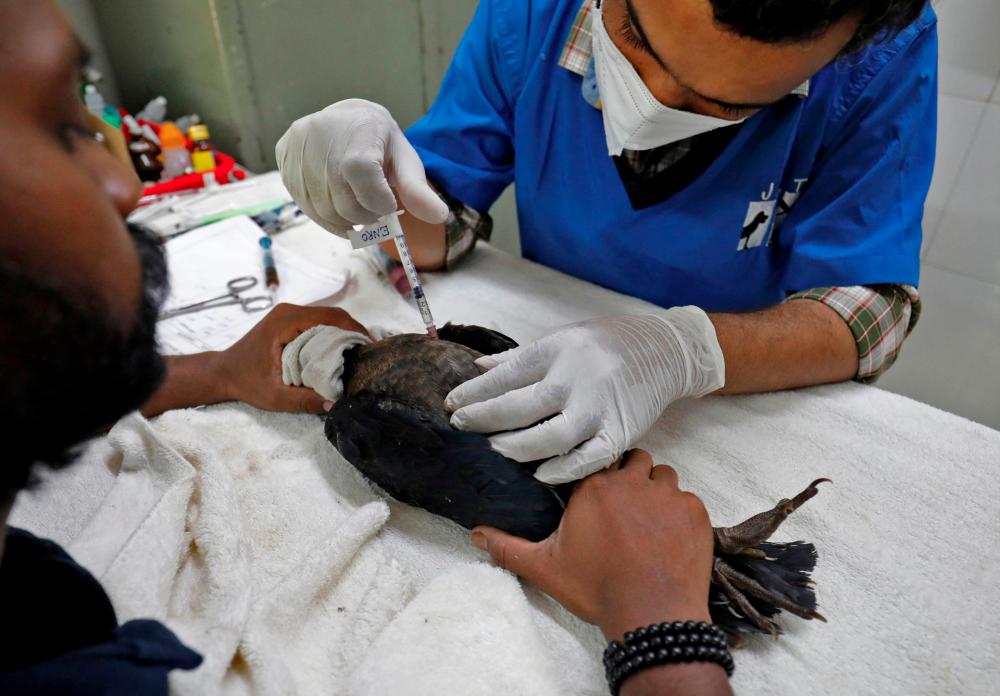 File photo: A vet administers an injection to an eagle after it was dehydrated due to heat at Jivdaya Charitable Trust, a non-governmental rehabilitation centre for birds and animals, during hot weather in Ahmedabad, India, May 11, 2022. REUTERSpix

NEW DELHI: A severe heatwave in India over the last few weeks is having an unusual impact on the country’s avian population, and in many places, birds are falling to the ground due to “exhaustion and heatstroke,“ animal rescuers say.

Since the beginning of the summer season in March, several parts of the country have been witnessing severe heatwave conditions. A few days ago, in some places in the capital New Delhi and northern Uttar Pradesh state, the temperature reached nearly 50 degrees Celsius.

The India Meteorological Department (IMD) has recently said that the country has recorded its warmest March in 122 years.

In many parts of the country, bird rescuers say they are seeing an unusual increase this year in rescue calls and the number of birds that need treatment is also higher.

Sanjay Patel, a senior employee at an animal hospital run by the nonprofit Jivdaya Charitable Trust based in the western state of Gujarat, told Anadolu Agency that the number of birds that need immediate attention and are brought to the hospital is more this year.

The temperature in many parts of the state has mostly remained over 40 degrees Celsius (104 degrees Fahrenheit).

“In the last three years, we used to see 25-30 birds each day. Now the figure has increased to 90-100 per day. In most of the cases which we get from Ahmedabad city, we are seeing dehydration as the main reason,“ said Patel, adding rescuers are picking up birds that have fallen on the ground and are bringing them to animal hospitals.

He noted that while the rising temperature was the main cause behind the high cases, the birds are released after being treated at the hospital.

The story is similar in the neighboring desert state of Rajasthan.

Raj Kishore, associated with Rajasthan-based Animal Aid Unlimited in the city of Udaipur, told Anadolu Agency they are receiving around 100 calls each day for rescues.

“The cases coming to us are different. It is not only birds. We are seeing other animals as well, like cows. Yes, compared to earlier, the bird cases are more,“ he said.

In New Delhi, Nadeem Shahzad from the private bird rescue organisation Wildlife Rescue said the biggest worry is that these months mark the breeding season.

According to IMD, the maximum temperature recorded in the capital on Sunday reached 49 degrees Celsius.

“In the last few weeks as the temperature has increased, the number of birds is more at the hospital. Also, it is the breeding season and the situation becomes more difficult for the nestlings when they leave and the temperature is very high and then they are not able to get any water,“ he said.

He said that birds face a lot of difficulties, including dehydration, and there are many cases of bird deaths.

“This time, the load is 50 per cent higher compared to last year,“ said Shahzad.

“Many cases that come to us also include those baby birds, who are learning to fly, but then because of dehydration or heatstroke, they fell on the ground and were then rescued.” — Bernama I did not see bribes given to Guan Eng: Witness I did not see bribes given to Guan Eng: Witness

Many surprises await in Waititi’s Love and Thunder

2.I did not see bribes given to Guan Eng: Witness

4.Many surprises await in Waititi’s Love and Thunder