‘As capable as a son’: Indians say no to the abortion of girls 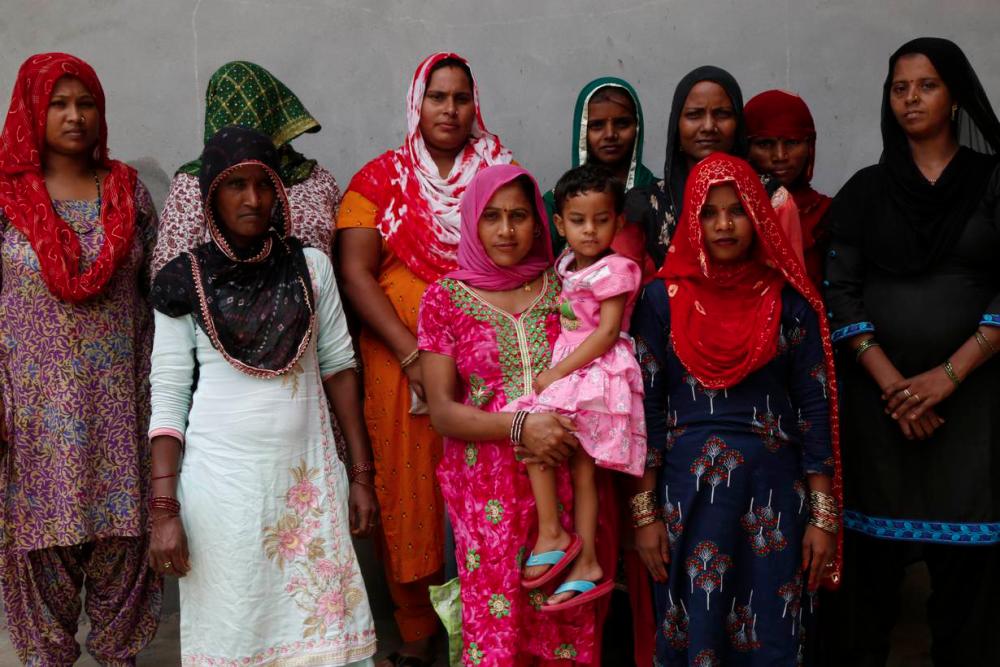 A group of trafficked brides pose for a photo in a village in Hisar, India, July 31, 2022. (Thomson Reuters Foundation) - REUTERSPIX

BALAWAS: Weak and traumatised after two miscarriages and weeks of painful bleeding, Ritu decided to stop trying for a son, in defiance of her traditional Indian family who wanted a male heir.

Instead, the 32-year-old housewife - who was married at the age of 19 to a man chosen by her parents - decided to educate their four daughters to become “as capable as a son”.

“They will finish school, go to college and then become pilots or engineers,“ said Ritu who lives in a village in the conservative northern state of Haryana and goes by one name, like many rural women.

“But they have to get out of here,“ she said as she washed a bucket of clothes, looking over her shoulder to check if her husband had returned because he would not approve of their daughters leaving home before marriage.

The preference for sons in India - seen as breadwinners who will carry on the family name and perform the last rites for their parents - has led to the illegal abortion of millions of female foetuses, particularly in northern states like Haryana.

But the latest government data and anecdotal evidence from women and health experts suggests that trend is changing due to education, the success of high-profile Indian women in business and sport and a crackdown on clinics that illegally abort girls.

Several women’s rights activists said they were skeptical about the figure because it only sampled 637,000 households in a country of 1.3 billion people and were waiting to see the results of the 2021 census, which has been delayed by COVID-19.

But women and community leaders say sexist attitudes are starting to shift as parents see that daughters can contribute financially, rather than being a burden, requiring a dowry when they marry.

There is no official data on sex-selective abortions.

But the U.N. sexual and reproductive health agency, UNFPA, estimates chrome-extension://efaidnbmnnnibpcajpcglclefindmkaj/https://india.unfpa.org/sites/default/files/pub-pdf/english-v6.29-web_1.pdf that India lost about 590,000 girl children to pre-natal sex selection every year between 2015 and 2020 and that about 46 million women and girls were missing in India in 2020.

Manasi Mishra, an expert on gender discrimination, has spent three decades speaking out against female foeticide in Haryana and explaining how it fuels bride trafficking, rape and “wife-sharing” as men outnumber women.

Through programmes like ‘Sports for Girls’ and female leadership training, and by encouraging parents to educate their daughters, Mishra has sought to boost the status of women in the community.

Sunil Jaglan is on a similar mission. After persuading millions of Indians to post selfies celebrating their daughters online - boosting the government’s 2015 Save the Girl Child campaign to end sex-selective abortions, he now tours villages talking to communities about domestic violence and sexism.

“I had a very patriarchal mindset ... but when I had my two daughters, everything changed,“ said Jaglan, a former village chief in Haryana.

“I knew I wanted to create a better world for them.”

Mishra of the New Delhi-based Centre for Social Research said this can be done by getting more women into the workplace.

India has one of the world’s lowest rates of female employment, with just 20% of women in the workforce, World Bank data https://data.worldbank.org/indicator/SL.TLF.TOTL.FE.ZS?locations=IN shows. With more working women, India could add $770 billion to its GDP by 2025, a McKinsey report https://www.mckinsey.com/featured-insights/gender-equality/the-power-of-parity-advancing-womens-equality-in-india-2018 found.

“When people see the economic returns on girls, this daughter aversion starts to fade,“ said Mishra, highlighting the success of wrestlers Sakshi Malik and Vinesh Phogat, who bagged gold medals at the Commonwealth Games last month.

The Haryana government rewarded the women with 15 million rupees ($187,822) each.

But dozens of women in Haryana - who described how they had been trafficked into marriage, confined to their homes and were beaten by their husbands if they did not wear veils in the presence of other men - said there was a long way to go.

“I cannot work outside. I’m not allowed to,“ said Rina, 45, who was trafficked three times when she was 12 years old.

“I get beaten every time I mention it.”

The women, gathered in a community centre in Balawas village to attend a talk by Jaglan, also said that people were increasingly fearful of being arrested for aborting girls.

Pregnant women’s ultrasound records are scrutinised by health authorities, who investigate clinics if they suspect sex-selective terminations are taking place.

“You never know when police use decoys (at clinics), pretending to be a doctor or receptionist,“ said Kavita.

“One of my cousins witnessed one a few years ago when she was there there for a routine ultrasound.”

Two women were arrested at a private clinic in India’s capital New Delhi in August over their involvement in a sex-selective abortions racket.

In May, health officials raided a house on the city’s outskirts and police arrested a doctor and two others for what they described as involvement in female foeticide.

Earlier that month, police busted a private clinic and arrested 13 people for illegal scans and abortions in the eastern state of Odisha.

Despite the deterrence, the son preference runs deep, resulting in parents opting to keep having children until they have a son, the women and Jaglan said.

As the men sat outside smoking traditional hookahs under trees, the women described how India’s skewed sex ratio had impacted their lives.

Mamata Singh, 25, was bundled into a car when she was 12, along with five other girls, and driven 2,500 kilometres (1,554 miles) from northeastern Assam state to Haryana, where they were sold into marriage.

“This is what happens when there aren’t enough girls, when people kill their daughters,“ Singh said.

“It still happens. Girls are purchased, and forced to become maids and sex (slaves).”

Her daughter, 11, looked away.

“My son will succeed just by the virtue of being a boy. But my daughter needs my support,“ said Singh, who is determined to see her daughter finish school.

“I will not let her be treated like an animal.”