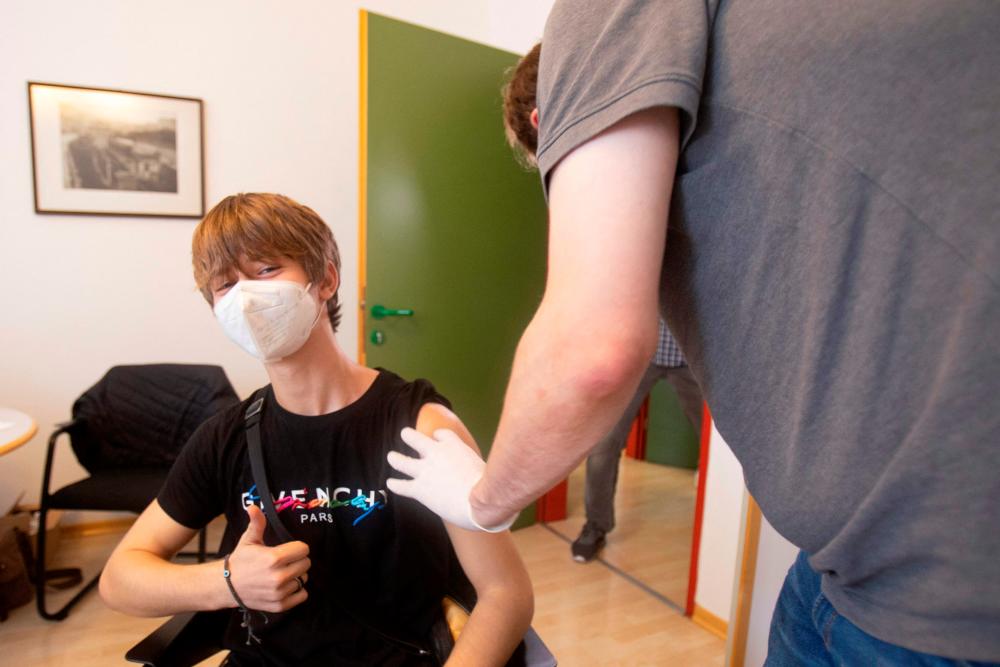 VIENNA: Father-of-two Shkelqim Kameni took his children out of school because of Austria's strict Covid testing for pupils and his opposition to the vaccine.

The 28-year-old shop manager from the western city of Salzburg is among a sharp rise in parents opting to homeschool instead.

Even weeks before the new school year started this month, the divisive issue garnered media coverage and has provoked heated exchanges online between parents.

Speaking to AFP at an anti-vaccine demonstration, Kameni said he was afraid that rigorous Covid testing created too much pressure in the classroom.

“Probably a child (who tests positive) will be mobbed... it’s psychological abuse of children; it’s child abuse,“ he said at the rally in downtown Vienna this month, attended by thousands.

More than 7,500 children have been withdrawn from school for this academic year, the education ministry says.

Although that's a small percentage of the 700,000 school-aged children in Austria, it is three times more than in previous years, according to ministry statistics.

“I’m getting contacted by at least 10 people or so per day” who want to take their children out of school, a mother of three who runs a Facebook group for homeschoolers told AFP.

Many of those who get in touch are upset about the latest anti-virus measures in schools, the mum, who spoke on condition of anonymity, said.

Since going back to school this month, children of all ages must now take a Covid test three times a week – at least one must be a PCR test – and tests will continue to be needed for those not vaccinated.

Masks are not required in the classroom but must be worn in the corridors this month while authorities monitor the situation.

Students from the age of 12 are also urged to get vaccinated -- mobile teams visit schools to offer jabs and the prospect of no longer needing to test.

Actress Eva Herzig, known for her past role in the TV crime series “Steirerkrimi”, has spoken publicly about her decision to teach her children at home with the help of other parents and teachers who have left the school system.

“I hear from so many mothers that teachers pressure children, saying they expect them to be vaccinated,“ she told Oe24 TV news channel last week.

“As a mother, I have to decide on the limits... This is my child and I protect my child,“ she added.

Unlike other European countries such as Germany where at-home schooling has been illegal since 1919 and presence in school is mandatory, Austrian parents only need to inform authorities in writing to deregister their children.

Education Minister Heinz Fassmann admits that the rise in homeschooling worries him, especially the impact on youngsters no longer learning with others of their own age in a classroom.

“I hope it is just a wave that comes and goes,“ he told AFP.

His ministry plans to require parents considering homeschooling to attend a meeting to ensure they are fully aware of what it entails.

It also wants homeschoolers to sit standard exams twice yearly, rather than just the current end-of-year ones.

But Evelyn Kometter, of the National Parents’ Association, says more support should be available for homeschoolers and their parents who “don’t feel their arguments are taken seriously”.

“The increasing number of parents taking their kids out of school should alert society,“ she said in a statement to AFP.

The Facebook group mum acknowledged that homeschooling was not for everyone and could be challenging without the backup and resources of the education system.

“People (who take their children out of school) have no idea what to expect... It is a lot of work,“ she said.

But she stressed the benefits of one-to-one teaching and the flexibility it offered especially for some children, such as those who are highly talented and whose needs may be neglected in the school system.

At a vocational school in a Vienna neighbourhood, several students told AFP they were glad to be back after remote learning for much of the last year due to Covid.

Marko Guculj, a 16-year-old who studies plumbing, said he'd decided to get his first jab when a mobile vaccination team came to school so he could go to restaurants and travel more easily under the current measures that require people to show proof of being Covid-19 vaccinated, cured or tested.

“I feel pressured (to get vaccinated) because some freedoms have been taken away from me,“ he said.-AFP

3.Water cuts in some areas in Port Dickson