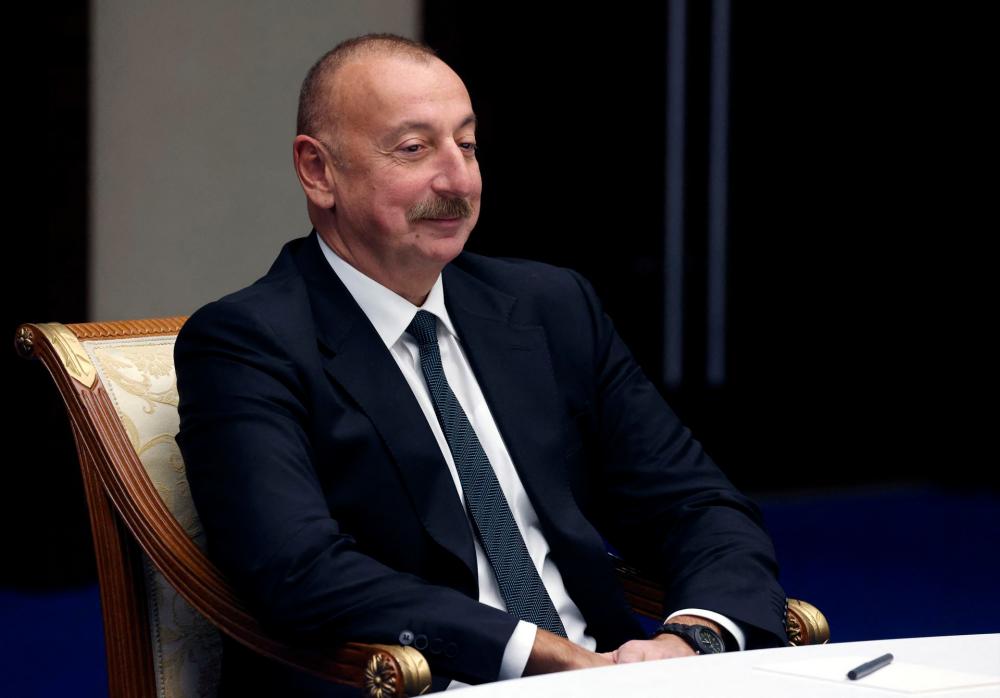 Azerbaijan’s President Ilham Aliyev attends a meeting with Russia’s President Vladimir Putin on the sidelines of the 6th summit of the Conference on Interaction and Confidence-building Measures in Asia (CICA), in Astana, Kazakhstan October 13, 2022. REUTERSPIX

PRESIDENT Ilham Aliyev said on Friday that Azerbaijan did not want France to take part in its peace talks with Armenia, and called off a four-way meeting with French President Emmanuel Macron and European Council head Charles Michel in Brussels on Dec. 7.

Aliyev said Macron had “attacked” and “insulted” Baku and should not act as a go-between.

Fighting flared in September between the two former ex-Soviet countries in their decades-old dispute over the Nagorno-Karabakh enclave - internationally recognised as part of Azerbaijan, but largely controlled by ethnic Armenians, with backing from Yerevan.

Each side accused the other of triggering the latest bout of fighting, in which Armenia said Azerbaijan had seized settlements inside its borders.

A ceasefire was agreed in late September and last month in Prague the two countries agreed to allow a civilian EU mission to be set up on their border.

But speaking on Friday, Aliyev accused Armenian Prime Minister Nikol Pashinyan of trying to undercut the next stage of talks by insisting France must be a broker.

“Macron ... attacked Azerbaijan and accused us in what we haven’t done,“ Aliyev said, speaking in English at a conference with international representatives in Baku.

He said the French leader had adopted an “anti-Azerbaijan position” and was “insulting” Baku.

“It is clear that under these circumstances, with this attitude, France cannot be part of the peace process between Azerbaijan and Armenia.”

Armenia’s foreign ministry said it wanted to maintain the “Prague format” of discussions, which involved Macron and Michel.

A spokesperson said Azerbaijan’s assertion that Yerevan was trying to disrupt peace talks “has nothing to do with reality,“ the Interfax news agency reported.

Macron has accused Russia of stoking tensions between Baku and Yerevan, and has also affirmed his support for Armenia's sovereignty in phone calls with Pashinyan.

Armenia also said on Friday that Azerbaijan had not yet responded to its latest proposals for a peace agreement, which it presented at a meeting between their foreign ministers in Washington at the start of November.

Kremlin spokesman Dmitry Peskov said on Friday that Moscow - which deployed 5,000 peacekeepers to the region in 2020 to manage a ceasefire after a six-week war - was ready to help broker further agreements, but that there was no concrete plan for the leaders to meet in Moscow.

Russia is a formal ally of Armenia but also seeks to maintain good relations with Baku, and resisted calls to deploy forces to help Yerevan under a mutual defence pact after fighting broke out in September. - Reuters