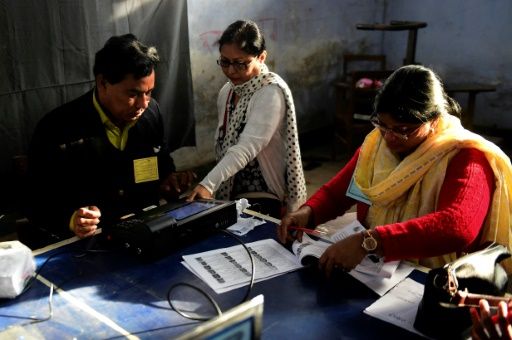 Bangladesh voters have been casting votes Sunday after an election campaign marred by violence. — AFP

Dhaka: Voters headed to the polls in Bangladesh Sunday following a campaign that was dominated by deadly violence and allegations of a crackdown on thousands of opposition activists by Prime Minister Sheikh Hasina’s government.

Electors began casting ballots at 8:00 am (0200 GMT) under tight security in a vote that is expected to deliver a historic but tainted fourth victory for Hasina.

Bangladesh’s leader has been lauded for boosting economic growth in the poor Asian nation during an unbroken decade in power and for welcoming Rohingya refugees fleeing a military crackdown in neighbouring Myanmar.

But critics accuse her of growing authoritarianism and crippling the opposition — including arch-rival Khaleda Zia who is serving 17 years in prison on graft charges she says are politically motivated — in a bid to cling on to power.

The weeks-long election campaign was marred by violence between supporters of her ruling Awami League party and activists from the main opposition Bangladesh Nationalist Party (BNP), led by Zia.

Some 600,000 security personnel were deployed across the South Asian country, including at 40,000 polling stations, in a bid to prevent further skirmishes.

Authorities have also ordered the country’s mobile operators to shut down 3G and 4G services until midnight on Sunday “to prevent the spread of rumours” that could trigger unrest.

There was fresh violence on the eve of the vote, however, when a ruling party activist was allegedly killed by supporters of the BNP and its Islamist ally, Jamaat-e-Islami.

“He was attacked with rocks. He died on the way to hospital,“ Mohammad Niamutullah, police chief in the southern town of Patia, told AFP.

The death brought to four the number of people confirmed killed by police since the election was announced on November 8, marking the country’s 11th parliamentary election since independence in 1971.

The BNP claims eight of its activists have died.

Opinion polls show Hasina, who has presided over six percent GDP expansion every year since she won a landslide in December 2008, heading for a comfortable victory that would extend her reign as the country’s longest-serving leader.

She needs 151 seats in the first-past-the-post system to win in the 300-seat parliament but experts say any victory would be sullied by accusations that she hamstrung her opponents’ campaign.

The opposition says more than 15,000 of its activists have been detained during the weeks-long campaign, crushing its ability to mobilise its grassroots support.

Human Rights Watch and other international groups have decried the crackdown, saying it has created a climate of fear which could prevent supporters of opposition parties from casting their ballots.

The United States has also raised concerns about the credibility of the Muslim-majority country’s election while the United Nations has called for greater efforts to make the vote fair.

Seventeen opposition candidates were arrested over what they claim are trumped up charges while another 17 were disqualified from running by courts which are allegedly controlled by Hasina.

“This is not (a) free and fair election. It is more a controlled selection,“ said a Western diplomat who has been monitoring the run-up to the polls and who asked not to be named.

Badiul Alam Majumder, the leader of a Bangladesh civil society group, said the alleged crackdown had “created a perception that the incumbent government will return to power”.

“Never in my life I have seen such kind of election. The election commission has totally failed to do its job,“ he told AFP.

Hasina rejects accusations of creeping authoritarianism but analysts say she has mounted a crackdown over fears that young voters were set to hand a victory to the BNP.

Her government was criticised earlier this year for its heavy handling of weeks of massive student protests over the abolition of job quotas and the standard of safety on Bangladesh’s dangerous roads.

Hasina, the daughter of Bangladesh’s first president Sheikh Mujibur Rahman, was gifted victory in the 2014 election when the BNP boycotted the vote claiming it wasn’t free or fair.

Since then, rights groups have accused Hasina’s administration of stifling freedom of speech through the toughening of a draconian anti-press law and the enforced disappearance of government dissenters.

The Bangladeshi leadership has alternated between Hasina and Zia, former allies-turned-foes, over the last three decades and the pair are nicknamed the “Battling Begums”.