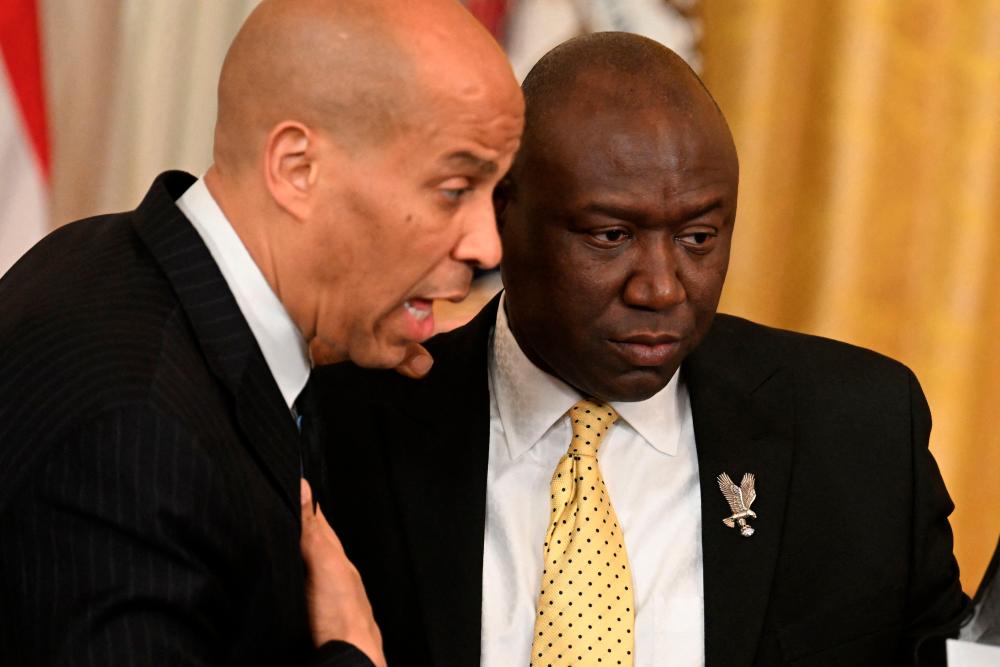 US Senator Cory Booker (D-NJ) and US attorney Ben Crump speak prior to a signing ceremony in the East Room of the White House in Washington, DC, on May 25, 2022. US President Joe Biden is expected to sign an Executive Order to advance policing and strengthen public safety. AFPPIX

“Two summers ago, in the middle of a pandemic, we saw protests across the nation the likes of which we hadn’t seen since the 1960s,” Biden said at the White House, reflecting on nationwide demonstrations that erupted after Floyd’s killing in Minneapolis, Minnesota.

“Their message was clear: enough, just enough,” he added.

The order does not directly apply to state and local police departments but seeks to increase accountability for federal officers, including those in the FBI and Customs and Border Patrol. It encourages state and local departments to adopt similar policies through grant incentives.

Biden’s order directs the Justice Department to establish a new federal database to track police misconduct in which all federal law enforcement agencies must participate. It will include records of officer misconduct, such as convictions and terminations, as well as an officer’s commendations and awards.

The president said the database would ensure officers “can’t hide misconduct.” And as part of his efforts to bolster public trust, the order revises use-of-force policies and mandates all federal officers wear body cameras during arrests and searches and expedites the public release of footage following serious injuries or deaths of individuals in custody.

Chokeholds and neck restraints are also being banned unless deadly force is authorised, and it restricts no-knock warrants, such as the one that was executed when Breonna Taylor was killed in 2020.

Such warrants will now only be allowed on a more limited basis, including when announced entry would “pose an imminent threat of physical violence,” according to the White House.

The order also reimposes and expands restrictions on the transfer of military equipment to state and local police departments. The restrictions were previously imposed under former President Barack Obama but were lifted by his successor.

Biden’s version broadens the type of military equipment that is prohibited for transfer. - Bernama