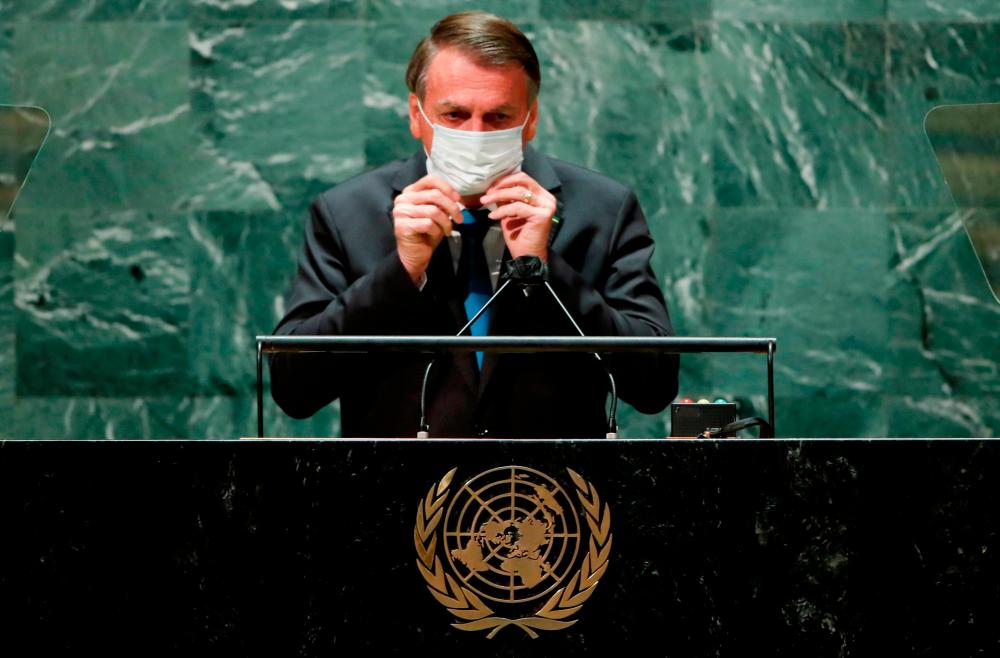 Brazil’s President Jair Bolsonaro puts back on a protective face mask worn due to the coronavirus disease (Covid-19) pandemic after speaking during the 76th Session of the UN General Assembly in New York City, US, September 21, 2021. REUTERSpix

SAO PAULO: Brazil's Justice Ministry has dispatched security forces to an indigenous reservation in the south of the country where two people have been killed in a dispute over renting land to soy farmers.

Federal police said they are investigating the fatal shooting of two members of the Kaingang tribe on Saturday during a wave of violence fueled by dissent in the community over distributing the farming income.

Iuri de Oliveira, the officer leading the investigation, told Reuters that Rosenildo Batista and Lucas Caetano were killed after being expelled from the reservation over a disagreement with the tribal leader. He said police have identified suspects in the killings but have not made any arrests yet.

Human rights groups and members of the Kaingang community say the murders are related to an arrangement to grow cash crops on the Serrinha reservation, a 12,000-hectare area in Brazil's southernmost state of Rio Grande do Sul.

In an order published in the government's official gazette on Tuesday, Justice Minister Anderson Torres authorized national security forces to support police on the Serrinha reservation.

Funai, the government's indigenous affairs agency, said it is monitoring the situation.

Although challenged as unconstitutional, a 2019 settlement between Funai, federal prosecutors and Cotriserra, a cooperative of Serrinha residents, has allowed the residents to keep leasing reservation land for farming.

In a statement, the Roman Catholic Church's Indigenous Missionary Council (CIMI) said the leasing of Serrinha land had spurred divisions over the distribution of income, calling on authorities to end land rentals to stop the violence.

In a public letter last month, a group of Kaingang elders accused the tribe's chief, Marciano Inacio Claudino, of hoarding proceeds from the three 60kg bags of soybeans per hectare that commercial farmers are paying for leased land.

Claudino told Reuters by telephone he had done nothing wrong and that he has the support of 90% of the Serrinha community members. -Reuters