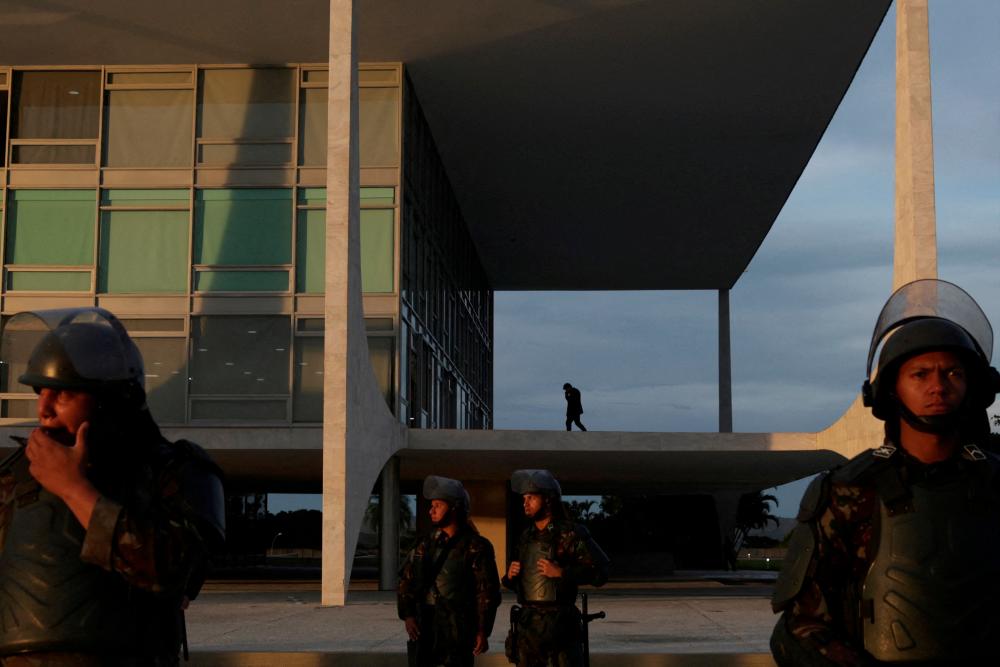 RIO DE JANEIRO: Police in Brazil plan on using facial recognition to identify protesters who rampaged through government buildings, escalating state surveillance in a move that has alarmed privacy and human rights experts.

Police have arrested about 1,000 people, and said on Tuesday they would use biometrics “to identify those responsible for acts of vandalism”.

Facial recognition operates in 21 of Brazil's 27 states, be it for monitoring urban transport or tracking school attendance.

Rights groups say their rollout was opaque, with no public consultations or clarity on how the data is used and protected.

While authorities justify the surveillance on security grounds, technology experts worry about privacy violations and the potential for profiling and discrimination, particularly of Black and indigenous people.

“As a tool of mass surveillance, facial recognition is an expedited patchwork solution that demonstrably fails time and time again at meeting the security objectives it purports to enable,“ said Matt Mahmoudi, a researcher at Amnesty Tech, an arm of Amnesty International that counters digital repression.

“It also erodes fundamental rights. Historically, marginalized communities are at particular risk; as is the privacy of Brazilians at large,“ he added.

For residents in Rio de Janeiro's Jacarezinho favela, facial recognition could soon be an everyday hazard.

Already, Jamila worries whenever her 23-year-old son steps out of their modest home, fearing he may be stopped by the police - or encounter something worse.

Her sprawling shantytown in Rio de Janeiro's north, home to about 60,000 mostly Black and poor residents, has endured decades of violence between criminal gangs and the police.

“I worry that these cameras will be used against the young men in the favela - many are already frequently targeted by the police on false grounds,“ said Jamila, 57, who asked that her last name not be used because she feared retaliation.

“My son spent 30 days in juvenile detention in 2016 when he was mistaken for a criminal due to a false photo identification. I fear that it may happen again with these cameras,“ she told the Thomson Reuters Foundation.

The Rio police did not respond to a request for comment.

Global use of facial recognition has grown rapidly, despite its poor track record identifying women and people with darker skin.

Aside from solving crimes, accessing apps or policing borders, it is also used to target dissidents and activists from as far afield as Iran to China.

Bolsonaro signed a pair of decrees in 2019 aiming to create a centralised database collating the personal and biometric information of Brazil's population of more than 200 million.

Dozens of cameras were deployed in Copacabana during Carnival, then expanded to other neighborhoods.

But the pilot project in Copacabana showed no reduction in crime, according to Panoptico.

The cameras also misidentified suspects in more than half of arrests, Panoptico said, citing police data.

After a 2021 shootout in Jacarezinho left at least 25 people dead, police stepped up their use of surveillance, tracking license plate numbers and faces throughout the favela.

Facial recognition is part of the federal government's plan for increased security in the favela, but there is little transparency about how the data will be used, said Dani Monteiro, president of the Human Rights Commission at Rio de Janeiro's state assembly.

“We searched in official diaries, government websites and could find nothing on them,“ she said. “The programme came in overnight, and only in the fine print did they mention the cameras.”

A spokesperson for Rio Governor Claudio Castro said they had appointed a committee to oversee the cameras' use, but did not say if they were addressing the concerns of civil rights groups.

Worldwide, there is growing pushback against facial recognition, with several U.S. and European cities banning its use, and the United Nations high commissioner for human rights calling for a moratorium until safeguards are set.

Last year, a court in Sao Paulo ruled that the city’s metro must stop using facial recognition, handing a victory to rights groups who had argued that it hurt vulnerable citizens, especially Blacks, due to its “algorithmic discrimination”.

Rio is pushing ahead with new surveillance, installing smart streetlights fitted with WiFi and cameras. Of the 10,000 cameras, 40% have facial recognition, according to officials.

In Jacarezinho, four of the 22 cameras planned for the neighborhood will carry facial recognition capabilities.

Many residents are unaware their every move may be recorded, said Pablo Nunes, a coordinator of Panoptico.

The Rio police are among the deadliest in Brazil, according to official data, and Black people make up the majority of those killed by the police nationwide.

So the cameras are a volatile - and futile - addition to an already fraught environment, said Nunes.

“In their own studies they (police) state that they wish to use these cameras in order to help defend police officers in lawsuits,“ he said.

“There’s no indication that they help reduce crime, or that they improve daily policing,“ he said. - Reuters