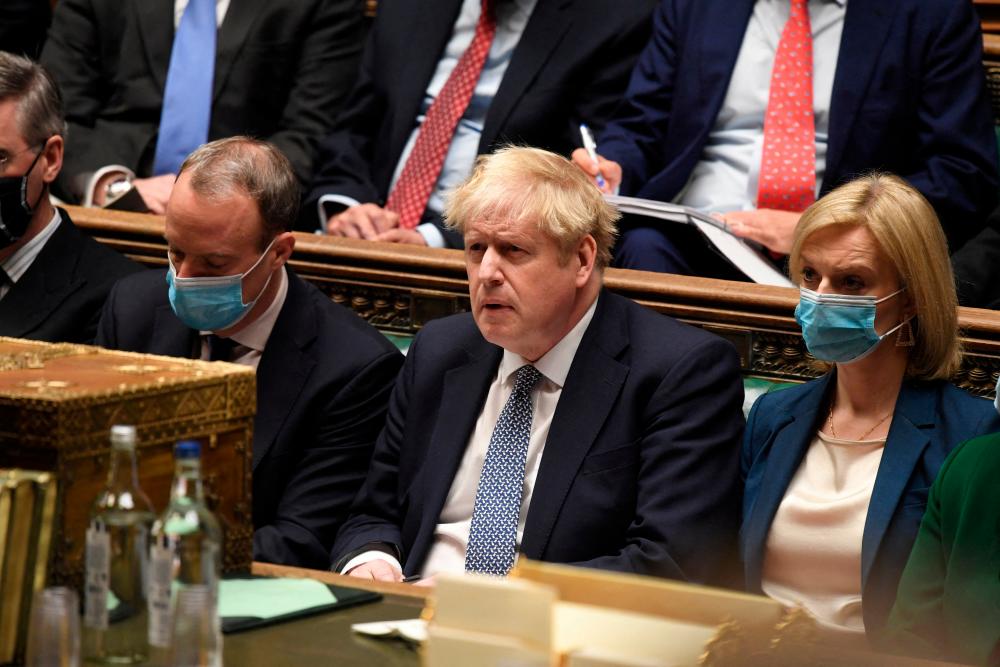 LONDON: UK Prime Minister Boris Johnson on Tuesday “categorically” rejected claims by his former chief aide that he lied to parliament last week about a Downing Street party held during a strict lockdown.

But appearing in public for the first time after days of Covid self-isolation, Johnson also ducked questions about whether he would resign if it is established by an internal inquiry that he did lie.

“Frankly I can’t imagine why on earth it would have been allowed to go ahead,“ Johnson added on a media appearance after visiting a London hospital.

Johnson is battling damaging allegations that he and staff attended boozy events during lockdowns, prompting public and political fury, and an investigation by senior civil servant Sue Gray.

He has apologised for a May 20, 2020 party in the Downing Street garden, telling parliament last week he had not known about it in advance and “believed implicitly that this was a work event”.

But his combative former senior adviser Dominic Cummings, who has been waging a vendetta against Johnson since he was sacked in November 2020, said he warned his then boss about the event at the time.

An aide to Johnson who reportedly sent out invitations to more than 100 people was told by two senior officials to cancel it, and he would have checked with the prime minister before going ahead, Cummings said.

Cummings wrote in a blog post that he told Johnson that Downing Street was becoming a “madhouse”. The prime minister “waved it aside”, he added.

“The events of 20 May alone, never mind the string of other events, mean the PM lied to Parliament about parties,“ said Cummings, adding he was ready to swear to his account “on oath”.

Six of Johnson's Conservative colleagues in parliament have so far openly called for his resignation, although dozens more are reported to have done so in private.

His senior ministerial colleagues have largely rallied round him, urging the public to wait for the conclusions from Gray's investigation, which is expected in the coming days.

But Dominic Raab, who is deputy premier and justice secretary, said an uncorrected lie by a minister “would normally under the ministerial code and the governance around parliament be a resigning matter”.

And in his first on-camera comments on the revelations, finance minister Rishi Sunak said “the ministerial code is clear on these matters”.

“I fully support the prime minister’s request for patience as this inquiry persists,“ added Sunak, who is tipped to be a strong contender to take over from Johnson in any leadership contest.

Hanging his head in Tuesday's appearance, Johnson also renewed an apology by Downing Street to Queen Elizabeth II after it emerged that his staff held leaving parties during a period of national mourning for her husband, Prince Philip, in April 2021. - AFP