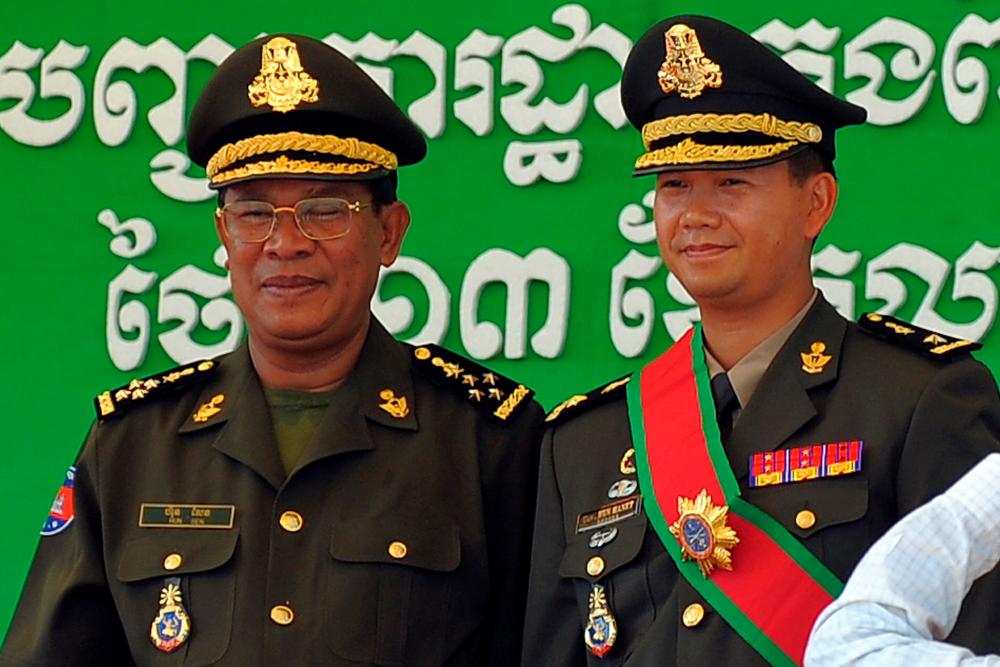 (FILES) In this file photo taken on October 13, 2009, Cambodia's Prime Minister Hun Sen (L) poses with his son Hun Manet during a ceremony at a military base in Phnom Penh. Cambodia's strongman Prime Minister Hun Sen, who has led the country for more than three decades, on December 2, 2021 backed his eldest son Hun Manet to take over the top job, paving the way for a political dynasty. AFPpix

PHNOM PENH: Cambodia’s strongman Prime Minister Hun Sen, who has led the country for more than three decades, on Thursday backed his eldest son to take over the top job, paving the way for a political dynasty.

Speculation has long simmered that the 69-year-old Hun Sen was grooming Hun Manet -- a four-star general educated in Britain and the United States -- to lead the kingdom.

“Hun Manet is one of the candidates for prime minister and receives support from his father,“ Hun Sen told a public ceremony in the coastal city of Sihanoukville.

He added his 44-year-old son, a Royal Cambodian Armed Forces deputy commander-in-chief and commander of the infantry, would have to face an election.

Cambodia is expected to go to the polls in 2023.

At the last election in 2018, Hun Sen’s party won every seat in parliament after the Supreme Court dissolved the main opposition, the Cambodia National Rescue Party a year before.

Critics say Hun Sen has wound back democratic freedoms and used the courts to stifle opposition and activists.

Hun Sen added that his son’s elevation to the top job could still be a decade away, keeping mum on his retirement plans.

He is one of the world’s longest-serving leaders and has been in power for 36 years.

Hun Sen frequently characterises his children’s achievements as the product of education and training and rejects claims of nepotism. -AFP