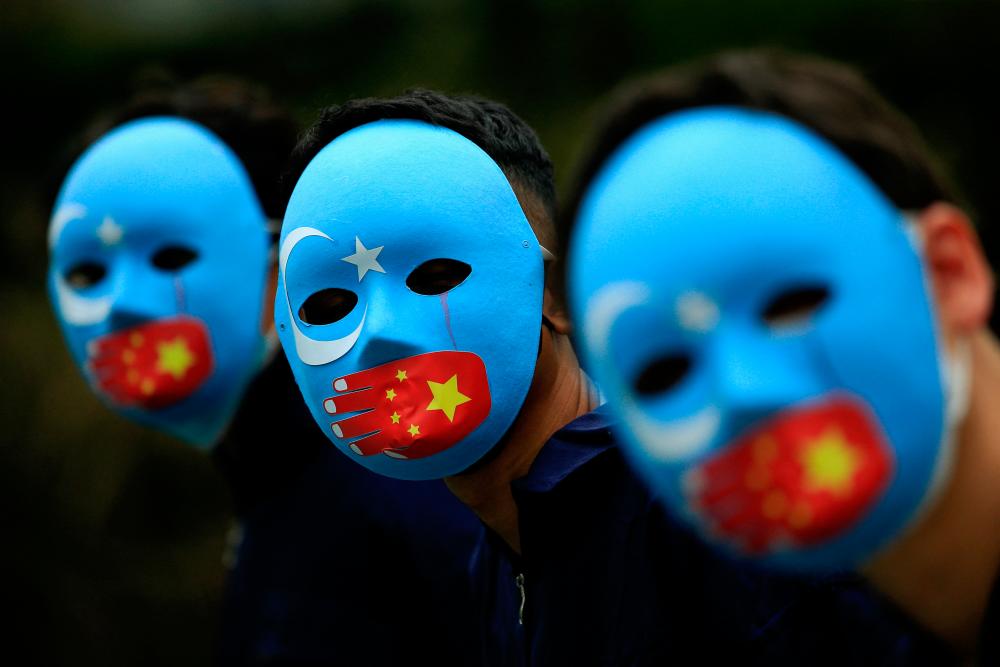 Activists take part in a protest against China’s treatment towards the ethnic Uyghur people and calling for a boycott of the 2022 Winter Olympics in Beijing, at a park Jakarta, Indonesia, January 4, 2022. REUTERSPIX

BEIJING: China's alleged persecution of its Muslim minorities has surged back up the global agenda as the United Nations' human rights chief prepares to visit its troubled Xinjiang region this week.

The trip by Michelle Bachelet comes as rights groups pile pressure on her office to release a long-postponed report on the situation in Xinjiang.

She is expected to visit Urumqi and Kashgar, two cities in Xinjiang, on Tuesday and Wednesday.

Beijing says its prolonged crackdown in the far-western province has stamped out terrorism and reset the economy of one of its poorest regions.

The United States and lawmakers in other western countries have accused China of committing “genocide” against Uyghur and other Muslim minority groups in Xinjiang.

Beijing vociferously denies the allegations, calling them the “lie of the century”.

Chinese authorities have detained more than one million Uyghurs and other mostly Muslim minorities in a secretive network of detention centres and prisons in Xinjiang, researchers say.

Beijing claims the facilities are vocational training schools that are attended voluntarily.

But former detainees have alleged rape, torture and political indoctrination inside the facilities.

Guards equipped with tear gas, stun guns and spiked clubs keep control in centres ringed with barbed wire and infrared cameras, according to a 2018 review of government documents by AFP.

Further insight has come from a series of government data leaks, notably a 2019 cache known as the “Xinjiang Papers” illuminating the scale of Beijing’s internment strategy.

A suspected police database reported by AFP this month detailed the charges of 10,000 imprisoned Uyghurs in southwestern Xinjiang, with many serving years-long sentences for vaguely defined terrorism offences.

One is a study manual issued to rank-and-file personnel in 2016 detailing interrogation techniques and urging them to watch out for “wild” imams, “two-faced” religious adherents and other groups.

But research suggests authorities have instead coerced tens of thousands of people into fields and factories under a system linked to the detention camps.

Forced Uyghur labour has seeped into major industries ranging from clothing to cars, smartphones to solar panels, according to a 2020 report by the Australian Strategic Policy Institute (ASPI), a think tank.

They include companies that supply well-known global brands, the researchers say.

Last year, the US passed a law banning the import of goods made with forced labour in Xinjiang.

In April, China said it had ratified two international conventions against forced labour.

Scholars and rights advocates say hardline birth control measures in Xinjiang since 2017 -- including quotas on sterilisations and IUD insertions -- are part of a deliberate attempt to slash ethnic minority births.

Population growth in some minority-heavy Xinjiang counties plunged between 2017 and 2019, according to research papers citing local government statistics.

The decline took place even as the central government has urged the mostly Han population nationwide to have more children in a bid to stave off a looming demographic crisis.

Some 16,000 mosques in Xinjiang -- around two-thirds of the total -- have been destroyed or damaged due to government policies mostly enacted since 2017, according to ASPI.

During a 2019 trip to the region, AFP reporters visited several holy sites that had been razed or repurposed, and found cities blanketed by cameras and police checkpoints.

Uyghurs also allege they have faced state pressure not to speak their own language and to abandon Islamic customs such as praying, owning holy books or growing long beards. - AFP