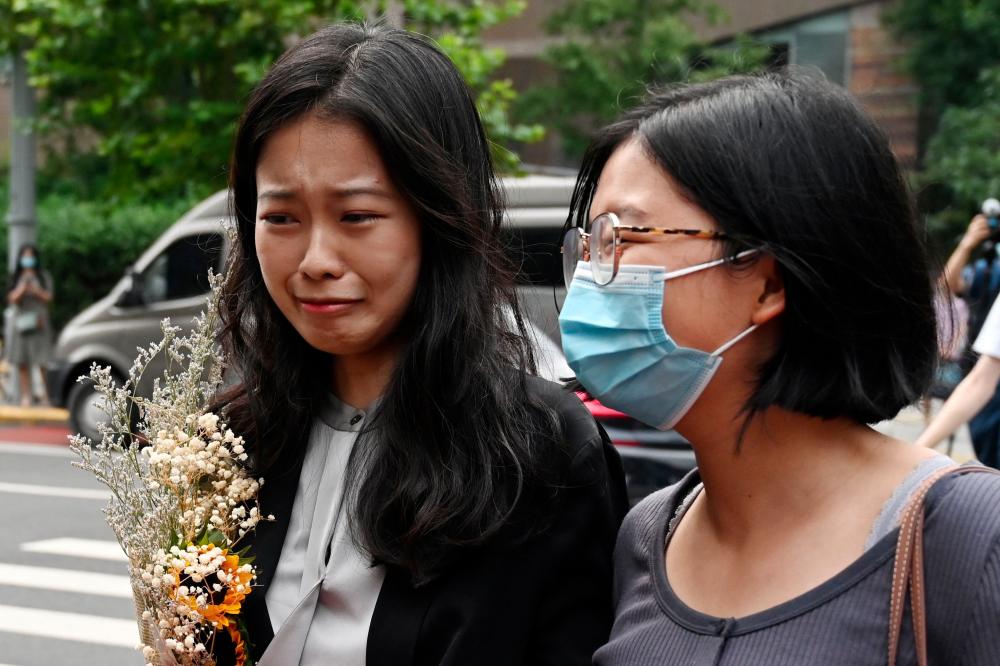 Zhou Xiaoxuan (L), also known as Xianzi, a feminist figure who rose to prominence during China's #MeToo movement, walks with a supporter before attending a hearing in her sexual harassment case against prominent television host Zhu Jun in Beijing on September 14, 2021. - AFPPIX

BEIJING: A landmark sexual harassment case in China was set to return to court Wednesday after an earlier ruling dealt a blow to the country’s fledgling #MeToo movement.

Zhou Xiaoxuan stepped forward in 2018 to accuse state TV host Zhu Jun of forcibly kissing and groping her during her 2014 internship at the broadcaster.

While the case of Zhou, now 29, inspired many others to share their experiences of sexual assault publicly and sparked a social media storm, a court ruled last year there was insufficient evidence to back her allegation.

Zhou appealed, and is scheduled to appear in court for another hearing at 2 pm (0600 GMT) Wednesday in Beijing.

“I still feel a little scared and dejected now,“ she told AFP ahead of the hearing.

“The process of the first trial was a deep secondary injury.”

She told AFP her legal team will focus on getting access to more evidence such as the police transcripts of interviews with her parents after she reported the incident -- which were not included in the earlier trial.

They are also requesting access to surveillance video footage.

Zhou said that Zhu was absent from earlier proceedings, and that while he had sued her for defamation, she was not aware of further developments in that case.

Zhou, also known by the pseudonym Xianzi, originally sued for a public apology from Zhu and 50,000 yuan ($7,400) in damages.

Her first hearing in December 2020 drew a large crowd and a significant police presence in Beijing.

Reporters from foreign media outlets including AFP were dragged away by police while filming the scene.

“The process for my case has truly been too difficult,“ Zhou said.

“I worry that other victims fear standing up for their rights after seeing what I’ve experienced.”

Her case against Zhu was originally filed under the “personality rights” law -- covering rights relating to an individual’s health and body.

But her lawyers later asked for it to be considered under a new sexual harassment law that was passed in 2020.

Despite that law, many women in China are still reluctant to come forward with harassment charges, and it is rare for cases to make it to court in a legal system that places a heavy burden on the claimant.

The country’s #MeToo movement has stumbled since 2018, when a wave of women published allegations of sexual harassment against university professors.

Threatened at the time by the prospect of an uncontrolled mass movement, internet censors quickly began blocking social media hashtags and keywords, with members of the public often turning to homonyms. - AFP