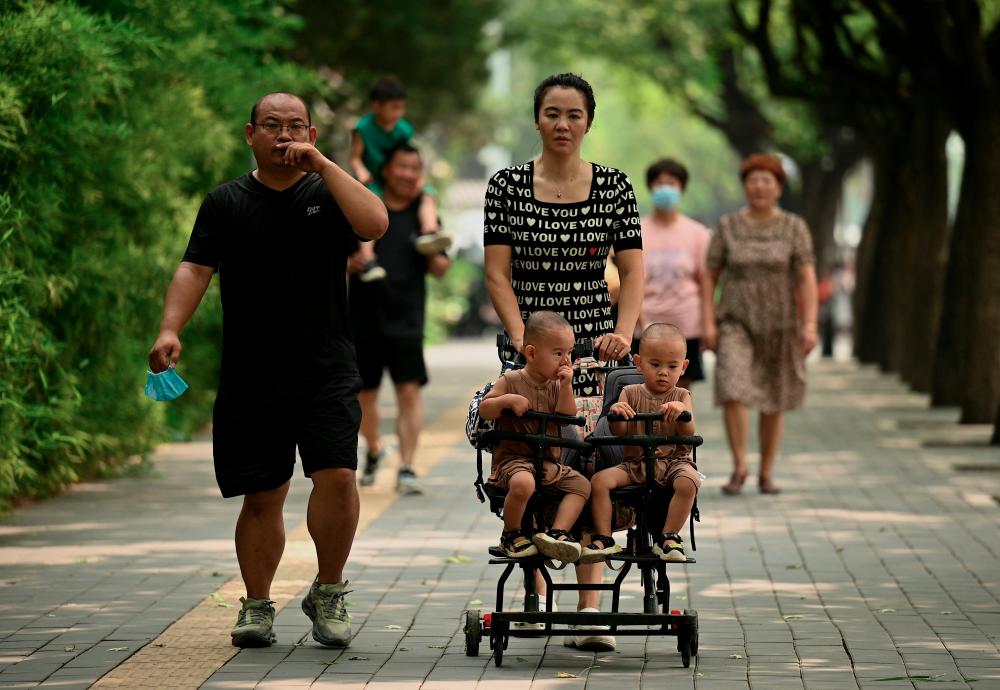 A woman pushes a trolley with twins along a street in Beijing on August 2, 2022. China's population will begin to shrink by 2025, officials said, as family sizes grow smaller and citizens age.AFPPIX

BEIJING: China today announced a slew of perks aimed at encouraging families to have more babies, as birth rates hit a record low and officials warned that the population will start to shrink by 2025.

The world’s most populous country has been grappling with a looming demographic crisis as it faces a rapidly ageing workforce, slowing economy and its weakest population growth in decades.

Although Beijing ended its draconian “one-child rule” in 2016 and last year allowed couples to have three children, birth rates have slipped over the past five years.

The policy guidelines issued by the National Health Commission today urge both the central and provincial governments to increase spending on reproductive health and improve childcare services nationwide.

All provinces must also ensure they provide enough nurseries for children aged two to three by the end of the year in a bid to reduce a severe shortage of childcare services.

Richer Chinese cities have been doling out tax and housing credits, educational benefits and even cash incentives to encourage women to have more children, and the latest guidelines seek to push all provinces to roll out such measures.

China’s birth rate slipped to 7.52 births per 1,000 people last year – the lowest since records began in 1949, when Communist China was founded, according to National Bureau of Statistics data.

Higher costs of living and a cultural shift as people grow used to smaller families have been cited as reasons behind the lower number of babies.