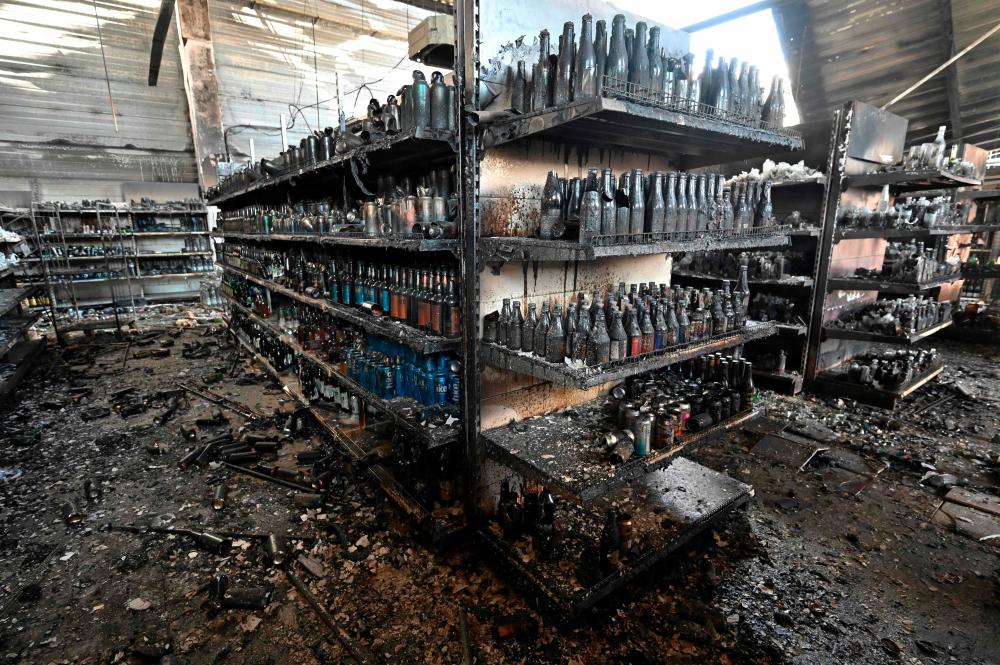 A photograph taken on June 28, 2022 shows charred goods in a grocery store of the destroyed Amstor mall in Kremenchuk. – AFPPIX

KREMENCHUK: A Russian missile strike killed at least three people in a residential building in southern Ukraine on Wednesday, authorities said, as the search continued for dozens still missing from an attack on a shopping mall two days ago.

Eight missiles struck the southern city of Mykolaiv including an apartment building, Mayor Oleksandr Senkevych said, just days after Ukraine said Russian missiles killed at least 18 people at a mall in the central town of Kremenchuk.

Photographs from Mykolaiv showed smoke billowing from a four-storey building with its upper floor partly destroyed.

Ukraine said Russia had killed civilians deliberately when it pounded the mall in Kremenchuk. Moscow said the mall was empty and it had struck a nearby arms depot.

“Russian missile hit this location precisely. De-li-be-ra-te-ly... It is clear that Russian killers received those exact coordinates,“ Ukraine’s President Volodymyr Zelenskiy said in an evening video address. “They wanted to kill as many people.”

Authorities said around 36 people were still missing in Kremenchuk.

Further east in Lysychansk in the Luhansk region, a key battleground in Russia’s assault on the industrial heartland of Donbas, the governor reported increased military action.

The situation in Lysychansk resembles that in its twin city Sievierodonetsk more than a month ago when the Russians started taking building after building, Luhansk Governor Serhiy Gaidai said on Wednesday. Sievierodonetsk fell to Russia on Saturday.

“The Russians are using every weapon available to them... and without distinguishing whether targets are military or not - schools, kindergartens, cultural institutions,“ he said on television.

“Everything is being destroyed. This is a scorched-earth policy.”

Russia has denied targeting civilian areas during its four-month offensive against Ukraine. The U.N. says at least 4,700 civilians have been killed since Russia invaded on Feb. 24.

In the Dnipropetrovsk region, towards Ukraine’s east, Governor Valentyn Reznychenko said bodies of a man and a woman had been found buried under the rubble of a transportation company office that was hit by a Russian missile on Tuesday.

Kherson, a port city on the Black Sea, sits just northwest of the Russian-annexed Crimean peninsula.

In the past few days, Ukrainians have also described attacks in the southern region of Odesa and Kharkiv in the northeast.

Valery Zaluzhny, chief commander of Ukraine’s armed forces, said on Telegram app on Tuesday that Russia had fired around 130 missiles on Ukraine within the last four days.

The Russian invasion, the biggest assault on a European state since World War Two, has driven up prices of food and energy worldwide and fuelled global security worries.

Finland and Sweden on Tuesday moved a step closer to joining the Western NATO military alliance in response to Russia’s actions, after Turkey dropped its opposition to their membership.

The Kremenchuk attack drew a wave of global condemnation.

“We have run out of words to describe the senselessness, futility and cruelty of this war,“ U.N. political affairs chief Rosemary DiCarlo told the Security Council.

While Kyiv said there was no military target in the area, Russia’s defence ministry said its missiles had struck a nearby arms depot storing Western weapons, which exploded, causing the blaze that spread to the nearby Kremenchuk mall.

Moscow’s assertion the mall was empty was contradicted by wounded survivors such as Ludmyla Mykhailets, 43, who said she had been shopping there with her husband when the blast threw her into the air “head first”.

Western countries have imposed sanctions on Russia, but so far have failed to curtail Moscow’s main source of income: oil and gas export revenue, which has actually risen with the threat of supply disruption driving up global prices.

The leaders of the Group of Seven nations have announced a new approach - leaving Russian oil on the market while imposing a cap on its price.

The United States also imposed sanctions on more than 100 new targets and banned new imports of Russian gold, acting on commitments made by the G7.

In a rare public questioning of Russia’s rationale for the war by one of its richest men, aluminium tycoon Oleg Deripaska told reporters in Moscow: “I think that destroying Ukraine would be a colossal mistake, including for us.” – Reuters