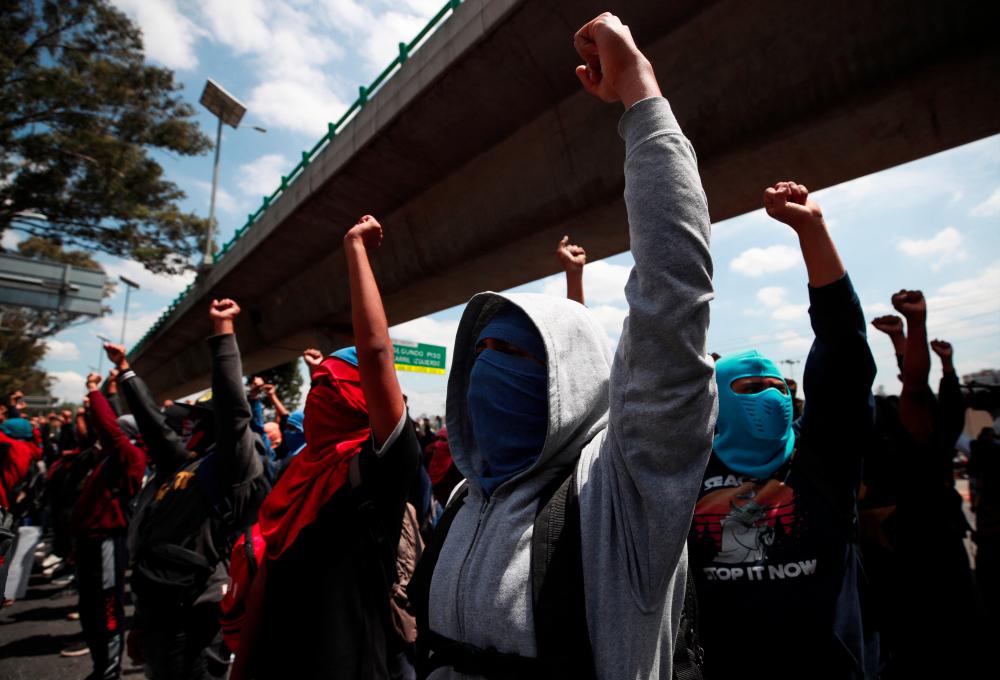 Demonstrators raise their fists during a protest ahead of the 8th anniversary of the disappearance of 43 students from Ayotzinapa Teacher Training College, outside the Campo Militar No. 1, in Mexico City, Mexico September 23, 2022. - REUTERSPIX

MEXICO CITY: Protesters hurling rocks and homemade explosive devices clashed with security forces at a Mexican military base during a demonstration Friday over the disappearance of 43 students in 2014.

Hundreds of demonstrators, some shouting “murderers,“ pulled down metal fencing and tried to enter Military Camp No. 1 in Mexico City in the latest event marking the eighth anniversary of the tragedy.

The confrontation came a day after around a dozen police officers were injured at a protest outside the attorney general’s office to demand justice for the students.

And on Wednesday, relatives staged a rally outside Israel’s embassy, demanding the extradition of Tomas Zeron, a former top investigator wanted in connection with one of the country’s worst human rights tragedies.

The 43 teaching students had commandeered buses in the southern state of Guerrero to travel to a demonstration in Mexico City before they went missing.

Investigators say they were detained by corrupt police and handed over to a drug cartel that mistook them for members of a rival gang, but exactly what happened to them is disputed.

Last month, a truth commission tasked by the current government to investigate the atrocity branded the case a “state crime” involving agents of various institutions.

It said that military personnel bore “clear responsibility,“ either directly or through negligence.

Arrest warrants have been issued for more than 80 suspects, including military personnel, police officers and cartel members.

Former attorney general Jesus Murillo Karam, who led a controversial investigation into the mass disappearance, was detained last month on charges of forced disappearance, torture and obstruction of justice. - AFP