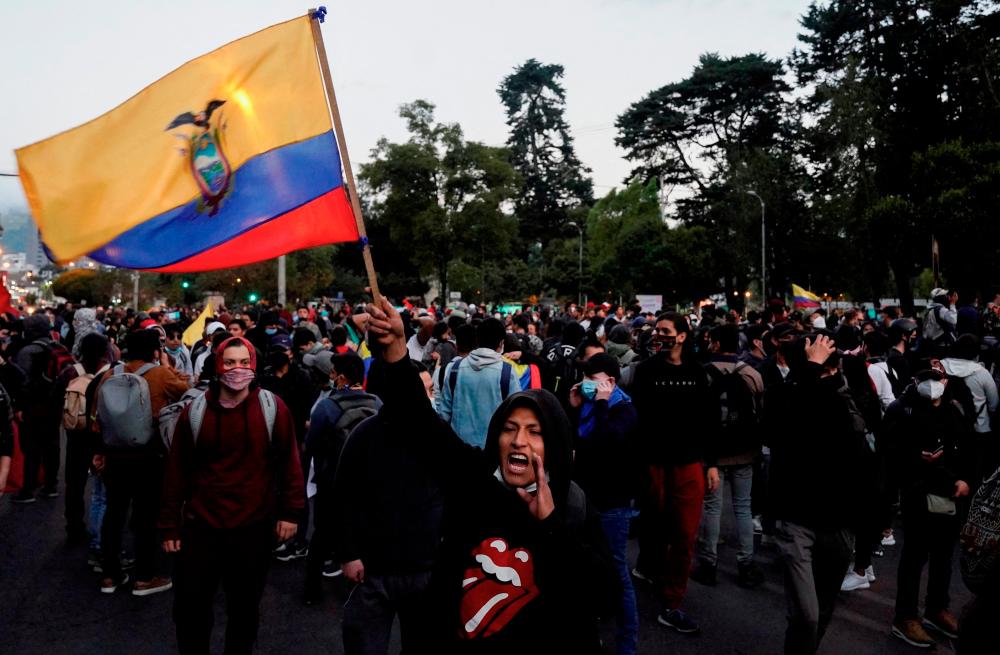 People protest against President Guillermo Lasso's economic and environmental policies and in support of Indigenous leader Leonidas Iza and other demonstrators arrested. - REUTERSPIX

QUITO: Ecuador police clashed with protesters Tuesday hours after authorities arrested the leader of an Indigenous movement, as his organization called for a popular uprising following nationwide roadblocks to protest high fuel prices.

The arrest of Leonidas Iza, leader of the powerful Confederation of Indigenous Nationalities of Ecuador (Conaie), sparked outrage, with authorities deploying police in riot gear and soldiers to stand guard outside the public prosecutor’s office where he was in custody awaiting a hearing.

Demonstrators gathered outside the building holding signs reading “Freedom for Iza!” and “We are not violent people, we are people in resistance.”

In the capital Quito police vehicles were set ablaze and protesters burned fires in the streets.

Unrest also broke out in the Andean city of Latacunga, where members of the Indigenous movement said several people were injured when police deployed tear gas.

Police said a group of officers was attacked and being held captive, although officials did not say how many. “Their whereabouts are unknown,“ police said on Twitter.

Iza, a leader of the Kichwa-Panzaleo community, had been arrested in Pastocalle, about 20 kilometers (12 miles) south of Quito, on suspicion of “sabotage,“ according to the interior ministry.

Pastocalle has been a flashpoint of protests called by Conaie against rising fuel prices and living costs, which saw demonstrators block roads across the country on Monday, some of which remained obstructed the following day.

Conaie confirmed the arrest of the 39-year-old Iza, condemning his detention as “arbitrary and illegal” and calling for a “radicalization” of protests.

“We call our organizational structure to a great Indigenous and popular uprising,“ Conaie tweeted after Iza’s arrest. “Long live the social struggle!”

In 2019, Conaie-led protests resulted in 11 deaths and forced then-president Lenin Moreno to abandon plans to eliminate fuel subsidies. The group is also credited with helping topple three presidents between 1997 and 2005.

Oil producer Ecuador has been hit by rising inflation, unemployment and poverty - strains exacerbated by the coronavirus pandemic.

President Guillermo Lasso warned Sunday the government would not allow roads or Ecuador’s oil installations to be taken over by protesters.

But Iza insisted the demonstrations would continue for as long as necessary.

Authorities estimate 6,000 people took part in Monday’s protests, although Iza had accused them of “minimizing” the demonstrations.

Lasso denounced “acts of vandalism,“ including “the burning of patrol cars, invasions of farms, the breaking of windshields on private and school vehicles, an attack on an oil pumping facility, the cutting off of community water supplies, the closure and serious damage to state roads.”

Several security ministers denied there was an attack on the oil pumping facility in Ecuador’s Amazon region.

Chinese company PetroOriental said Tuesday protesters had occupied and paralyzed some of its wells in the Amazonian Orellana province, causing a loss of 1,400 barrels of crude per day.

He could face up to 10 years in prison if convicted.

Carrillo accused protesters of “paralyzing, looting, kidnapping, attacking” in such a way that “the disorder, the chaos, the vandalism causes social unrest.”

Conaie has taken part in several rounds of fruitless talks with Lasso’s government.

Lasso froze fuel prices last October after a round of protests led by Conaie that saw dozens arrested and several people, including police, injured in clashes.

But the freeze failed to assuage simmering anger in a country that exports crude but imports much of the fuel it consumes.

The protesters are also demanding the government address price controls on agricultural products and mining concessions granted in Indigenous territories.

They have also called on government to create more jobs and to renegotiate farmers’ debts with banks.

Indigenous peoples make up over a million of Ecuador’s 17.7 million inhabitants. - AFP Noh: ‘If you want to suspend me for six years, might as well sack me’