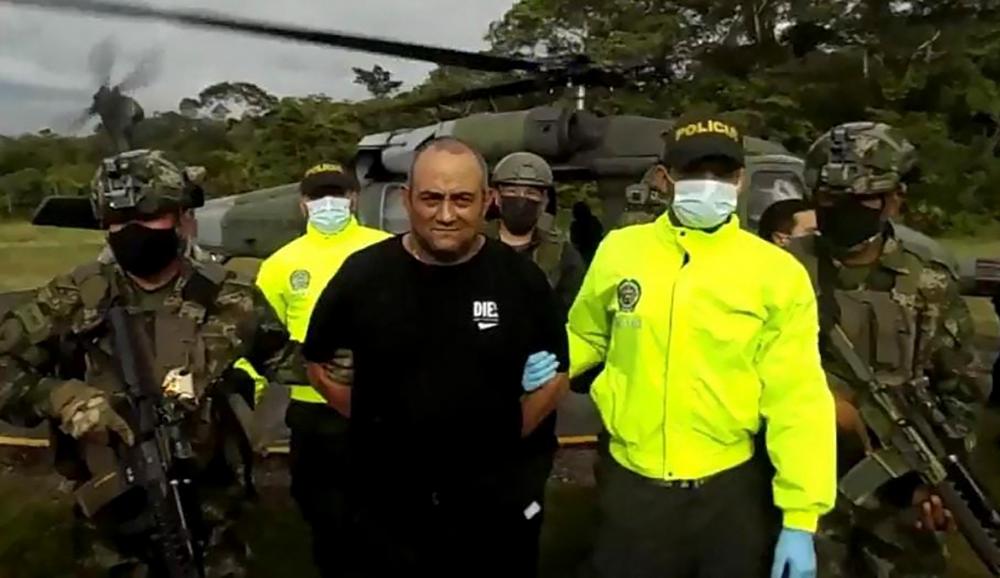 BOGOTA: The chief of the biggest drug gang in the world's top cocaine producer, Dario Usuga – known as Otoniel –was captured by authorities in Colombia, the government said Saturday.

The announcement marked the fall of a man who emerged from a poor peasant family to become Colombia's most-wanted man.

At the helm since 2012, Otoniel has been able to evade capture despite a $5 million US bounty on his head and massive manhunts involving more than 1,000 men.

Offering the reward in 2009, the US State Department described the gang as "a heavily armed, extremely violent criminal organization."

Dairo Antonio Usuga was born on September 15, 1971 in Necocli, northwestern Colombia, the seventh of nine children in a family that lived off the sale of cattle, pigs and poultry.

At 18 he joined the Popular Liberation Army (EPL), a Marxist guerrilla group that demobilized in 1991.

"He was not revolutionary," his mother said in an interview with the daily El Tiempo in 2015. "That was all there was and he went with them."

In 1993-1994 Otoniel stood with the far-right paramilitary Peasant Self-Defenders of Cordoba and Uraba (ACCU), which was created to protect farmers against left-wing guerrillas and was linked to drug trafficking.

It became part of the United Self-Defense Forces of Colombia group of paramilitaries that fought leftist armed groups during the country's long conflict and were involved in the drug trade.

The paramilitaries were officially disbanded in 2006, after negotiations with the government, but some continued in what became the Gulf Clan gang.

Otoniel had no particular ideology but he felt "betrayed" by the demobilization process and chose to remain underground, security analyst Ariel Avila told AFP in 2017.

He took over the leadership of the Gulf Clan, previously known as the Usuga Clan, from his brother Juan de Dios, who was killed by police in 2012.

The brothers together built a criminal network active in almost 300 of Colombia's 1,102 municipalities, concentrated mainly on the Pacific coast from where most drugs leave the country.

It works with street gangs that handle micro-trafficking, extortion and assassinations, says the InSight Crime foundation that studies organized crime in Latin America.

Otoniel "became leader by inspiring fear, and it is out of fear that he is respected," police anti-narcotics division chief Jose Angel Mendoza said in 2017.

He avoided capture over the years using guerrilla tactics, including only travelling by foot or donkey and never sleeping two straight nights in the same place, according to Colombian authorities.

In June 2017 police choppers scoured lush banana fields of the north for him, certain they came close.

"He has had to run for it at the last second more than once," Mendoza said at the time.-AFP