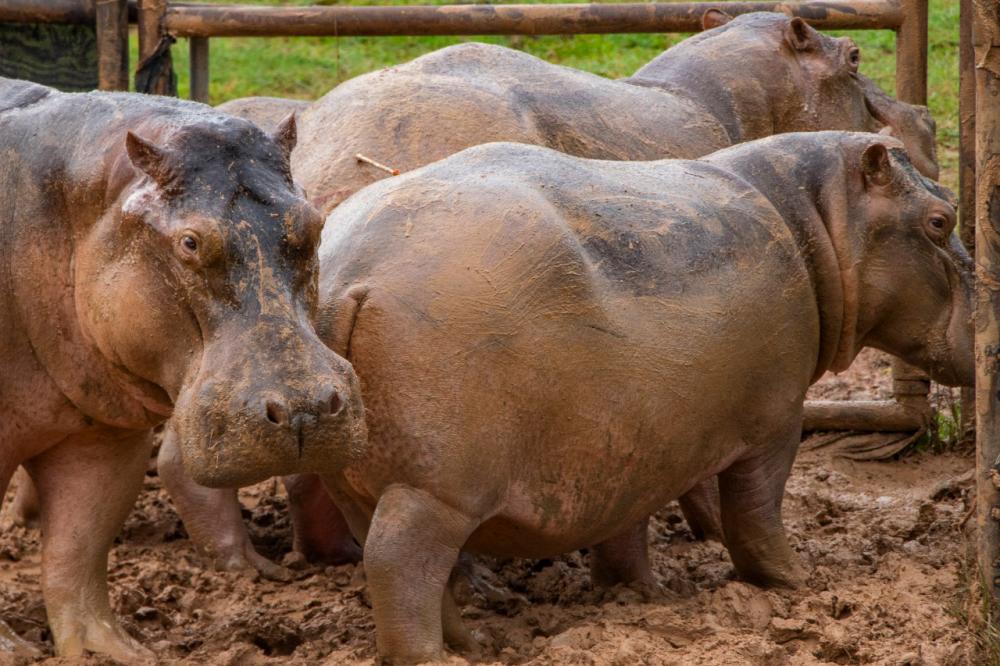 Hippos are seen at a care centre in Doradal, Antioquia Department, northeast of Bogota, on October 15, 2021. AFPpix

BOGOTA: Twenty-four out of 80 hippopotamuses roaming on the former ranch of the late Colombian drug kingpin Pablo Escobar were sterilized due to the “uncontrolled” spreading of this “invasive” species, authorities said on Friday.

Before he was shot dead by police in 1993, the notorious Escobar had purchased a number of exotic animals to live on his ranch, including flamingos, giraffes, zebras and kangaroos.

After his death, all but the hippopotamuses were sold to zoos.

They were left to roam on his Hacienda Napoles estate, which has since been converted into a theme park, as they were considered to large to try to move, but since then their numbers have multiplied.

The hippos were shot with darts to inject them with a medicine called GonaCon, according to a bulletin by Cornare, a regional environmental protection organization in the northwest of Colombia.

“It’s a contraceptive that is effective in males and females” and cheaper than surgical sterilization, said Cornare.

Another 11 hippos were previously sterilized by more traditional means.

Experts believe this to be the largest herd of hippopotamuses outside of Africa and it has led to problems.

“The presence of these animals in an ecosystem that is not their own, brings consequences such as the displacement of local fauna,“ said David Echeverri, a Cornare expert quoted in the bulletin.

The hippos are also responsible for “changing ecosystems” and attacks on local fishermen.

Escobar became one of the richest men on the planet, according to Forbes, thanks to the drug trafficking empire he built.

Almost 30 years since his death, Colombia remains the largest producer of cocaine in the world, much of it smuggled to the United States. -AFP