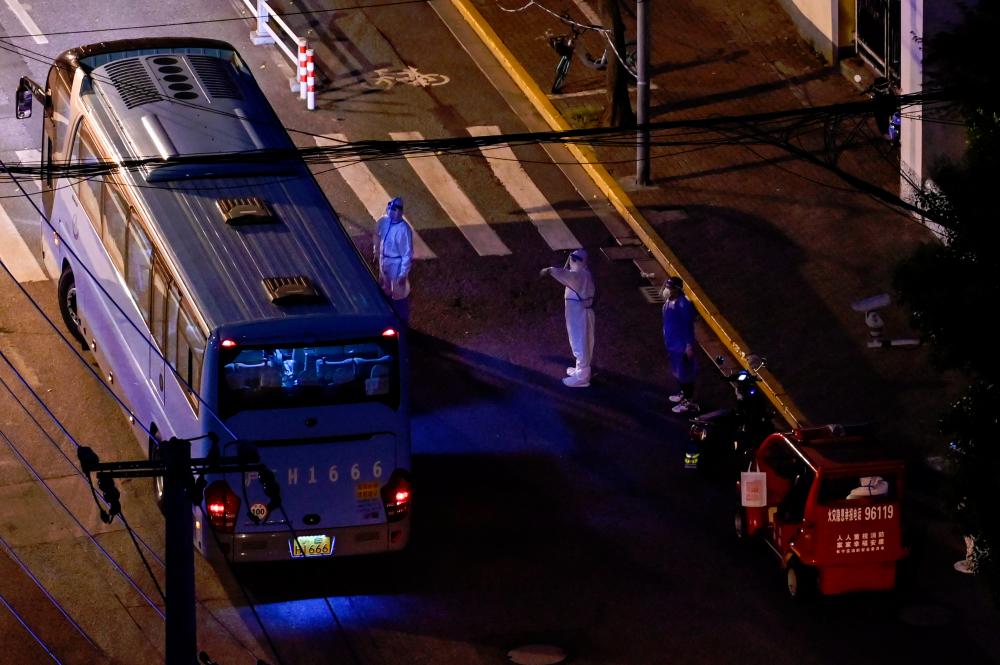 Workers wearing personal protective equipment (PPE) stand next to a bus on a street during a Covid-19 coronavirus lockdown in the Jing’an district in Shanghai. - AFPpix

SHANGHAI: Shanghai announced a gradual reopening from Monday of businesses, though it remains unclear when the millions of people still locked down in China’s economic capital will finally be allowed out of their homes.

Confronted with its worst Covid-19 outbreak since the beginning of the pandemic, China -- the last major economy still closed off to the world -- put the city of 25 million under heavy restrictions in early April.

The rigid strategy to root out virus cases at all costs has wreaked havoc on supply chains, crushed small businesses and imperilled the country’s economic goals.

For many Shanghai residents, some of whom were already confined to their homes even before April, the frustrations have included problems with food supplies, access to non-Covid medical care and spartan quarantine centres, and many are venting their anger online.

Shanghai vice mayor Chen Tong on Sunday announced a reopening of businesses “in stages” from May 16.

Chen however did not specify if he was referring to a gradual resumption of activity in the city or if it was conditional on certain health criteria.

Under China’s zero-Covid strategy, any lifting of restrictions is generally conditional on seeing no new positive cases for three days, outside of quarantine centres.

Shanghai authorities were aiming for this goal by mid-May.

Infections appear to be on the decline, with 1,369 new cases reported on Sunday in Shanghai, way down from more than 25,000 at the end of April.

In some areas of the city, however, restrictions have been tightened in recent days.

Some 1,200 kilometres (750 miles) north, residents of Beijing fear they could face a similar lockdown after more than a thousand cases were recorded in the capital since the end of April.

Beijing has repeatedly tested its residents and locked down buildings with positive cases and closed metro stations and non-essential businesses in certain neighbourhoods.

In an attempt to curb the outbreak, Fangshan district in the southwest of Beijing, which has 1.3 million residents, suspended taxi services from Saturday.

Apart from a few neighbourhoods which are under restrictions, the vast majority of Beijing’s 22 million inhabitants can still leave their homes.

But many public places are closed and residents are forced to work from home, especially in the populous Chaoyang district, where many multinationals are based. - AFP Murray says Wimbledon 'will never be an exhibition' Finnish MotoGP cancelled due to tensions with Russia Murray says Wimbledon 'will never be an exhibition'

Finnish MotoGP cancelled due to tensions with Russia

Fati gets late winner as Barcelona down All Stars 3-2

2.Murray says Wimbledon 'will never be an exhibition'

3.Neymar wants to stay at PSG despite rumours over his future

4.Finnish MotoGP cancelled due to tensions with Russia