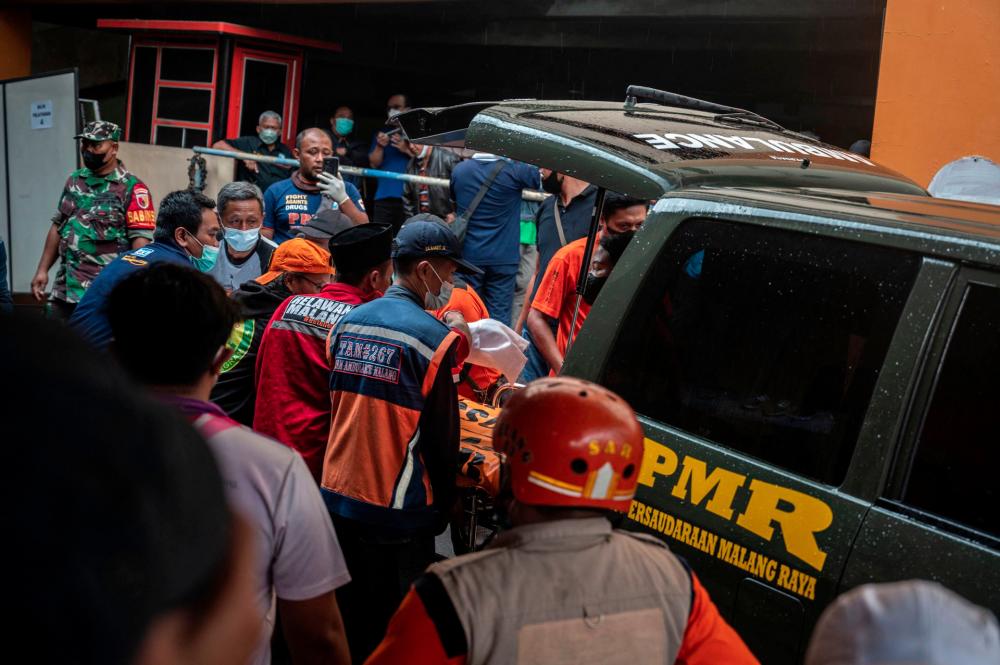 Medical workers receive a body at a hospital in Malang, East Java on October 2, 2022. At least 174 people died at an Indonesian football stadium when thousands of angry home fans invaded the pitch and police responded with tear gas that triggered a stampede, authorities said on October 2. - AFPPIX

After supporters of the losing home team stormed the pitch in the East Java province on late Saturday, officers fired tear gas to disperse them, triggering the stampede and cases of suffocation.

Deputy East Java Governor Emil Dardak, meanwhile told the local Kompas TV that more than 100 people were also injured in the incident and that they are under treatment in eight hospitals.

A video shared on social media shows fans, dressed in red and blue, storming the pitch after Arema FC lost 3-2 to Persebaya Surabaya and clashing with security forces, who appeared to be wearing riot gear.

Sports Minister Zainudin Amali said authorities would reevaluate safety at football matches and consider not allowing spectators at matches after the stampede.

The Indonesian Football Association (PSSI) has suspended next week’s matches because of the tragedy and banned Arema FC from hosting matches for the rest of the season.

Meanwhile, Coordinating Minister for Political, Legal, and Security Affairs Mohammad Mahfud Mahmodin said: “I need to emphasise that the tragedy was not a clash between Persebaya fans and Arema. Because in that match Persebaya supporters were not allowed to watch.” - Bernama