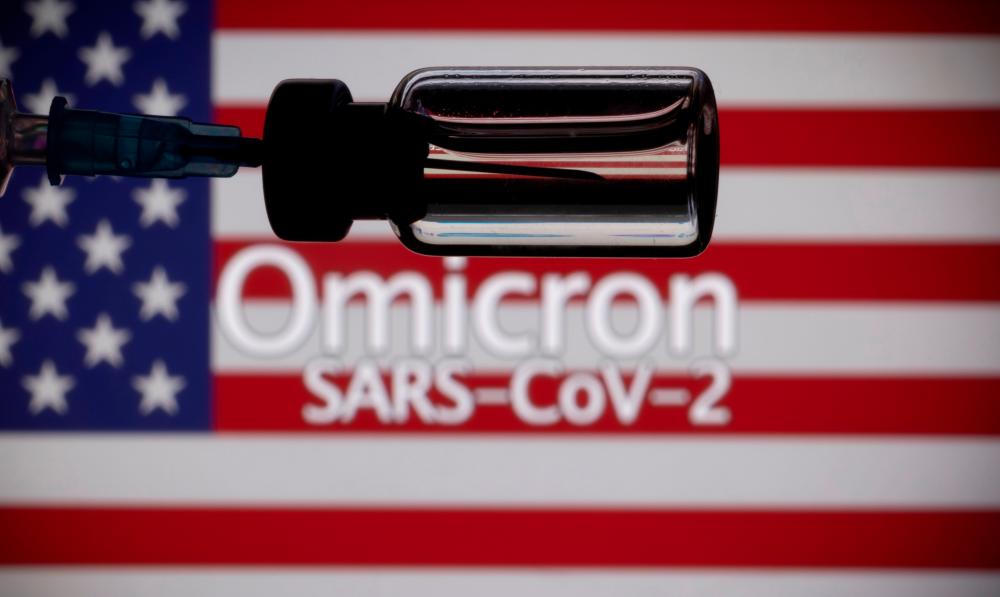 FILE PHOTO: A vial and a syringe are seen in front of a displayed United States' flag and words "Omicron SARS-CoV-2" in this illustration taken, November 27, 2021. REUTERSpix

WASHINGTON: The Delta variant is still Americans’ leading coronavirus health threat even as more U.S. states reported cases of the Omicron strain on Friday amid concern that winter and holidays may further the spread, experts said.

While Omicron has been grabbing headlines as the newest coronavirus variant, the predominant U.S. strain remains the Delta variant, said U.S. Centers for Disease Control (CDC) and Prevention Director Rochelle Walensky at a White House briefing.

Scientists are investigating the impact of the highly contagious Omicron coronavirus strain, with some questioning whether it may cause milder illness than its predecessors, including the Delta variant.

Five more U.S. states, Missouri, Utah, Nebraska, Maryland and Pennsylvania, reported on their first cases of the Omicron strain on Friday. Missouri was awaiting CDC confirmation of a case involving a St. Louis resident who had recently traveled domestically.

The Utah case was discovered through ongoing genetic sequencing of positive COVID-19 samples at the state laboratory, the state’s health department said on Twitter.

Nebraska had six confirmed cases, the state’s health department said. Only one of the six people was vaccinated and none have needed to be hospitalized with COVID-19, the department added.

Maryland Governor Larry Hogan announced the first three cases of the Omicron variant in his state, adding that none of the three individuals were hospitalized. And in Pennsylvania, a Philadelphia man in his 30s tested positive for Omicron, city health officials said.

Walensky and other health experts said the best way to fight the spread of COVID-19, regardless of the strain, remains to get vaccinated.

“I’m very worried about our healthcare system over the next few weeks and few months. I don’t know how much more it can handle,“ he said, urging reinforcements from the National Guard and other contingency plans to bolster region’s doctors and nurses.

Former FDA Commissioner Dr. Scott Gottlieb said states with higher vaccination rates would likely be better protected against Omicron, saying unvaccinated people who survive Delta could find their immunity is not protective against the new variant.

“The risk for the future is that states that are relying on a lot of Delta infections to provide immunity to their populations ... they could be more susceptible to this new variant,“ Gottlieb, now a member of vaccine maker Pfizer’s board, told CNBC.

Omicron has been detected in about 40 countries, including the United States, where it was found in California, Colorado, Hawaii, Maryland, Minnesota, Missouri, Nebraska, New York, Pennsylvania and Utah.

The CDC is working with local authorities to investigate suspected cases of the Omicron variant in states other than those where cases have already been reported. - Reuters 4.Najib fails to reinstate lawsuit against former banker and AmBank