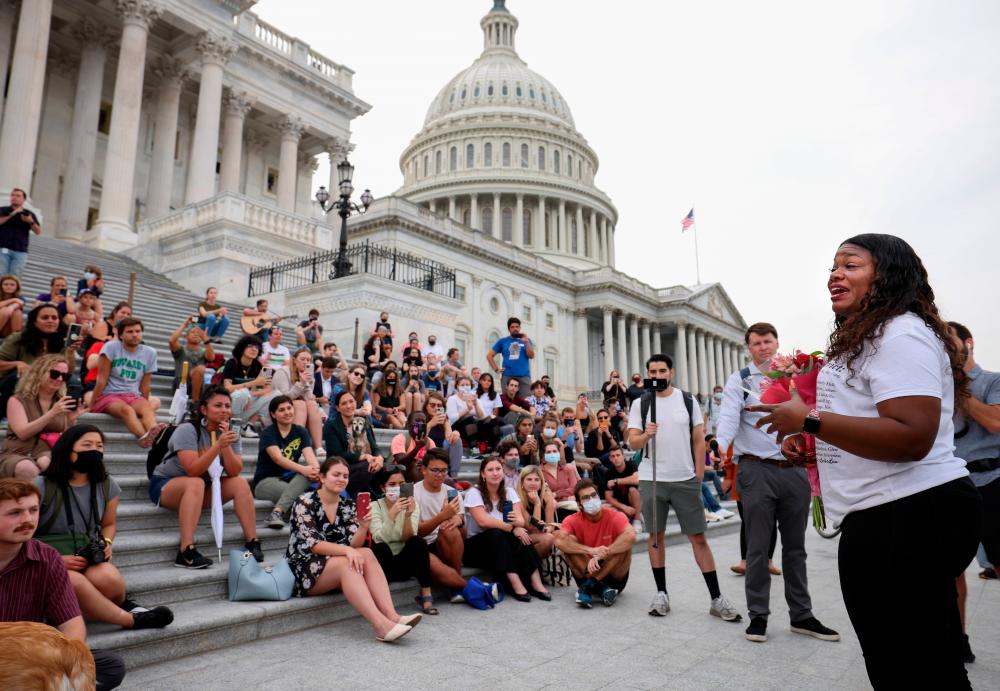 WASHINGTON, DC - AUGUST 03: U.S. Rep. Cori Bush (D-MO) speaks to supporters at a rally on the eviction moratorium at the U.S. Capitol on August 03, 2021 in Washington, DC. News organizations reported that the Biden Administration plans to institute a new eviction moratorium for areas with high levels of COVID-19, days after Bush started camping out on the steps of the Capitol Building to protest the end of the CDC's original moratorium. -Kevin Dietsch/Getty Images/AFP

WASHINGTON: US congressional Democrats yesterday pushed the White House to reinstate an expired moratorium on residential evictions that kept millions of people from being forced out of their homes for unpaid rent during the pandemic, but which expired over the weekend.

Senate Majority Leader Chuck Schumer and House Speaker Nancy Pelosi both called for reinstatement of the ban on evictions that expired at midnight on Saturday.

Congress wants the Biden administration to reinstate the ban, while the White House says a Supreme Court ruling in June means it lacks legal authority to do so without congressional approval.

On Sunday, the US Centers for Disease Control and Prevention (CDC) rejected President Joe Biden’s request for a new scaled-down pandemic-related moratorium on residential evictions, the White House said.

Democratic Representative Maxine Waters tweeted “every minute wasted means another family could be forced onto the streets. Biden, #ExtendTheMoratorium now!”

A Supreme Court opinion last month indicated that legislative approval would be required to impose a new moratorium. White House spokeswoman Jen Psaki said that if the White House extends the moratorium without congress authorizing the CDC’s power to do so, it could risk an adverse court decision.

On Sunday, Biden asked the CDC to target a new moratorium on counties with higher Covid-19 case rates, the White House said.

White House officials said Biden has not given up as he asked officials to look at any potential authority to reinstate the eviction moratorium.

Biden also called on state and local governments to extend or put in place eviction bans for at the least the next two months, Psaki said.

On Friday House Democrats tried to advance legislation to extend the moratorium to October 18, but a Republican congressman blocked their bid to pass the measure by unanimous consent.

Pelosi told lawmakers such an extension would provide more time to speed distribution of US$46.5 billion (RM196.45 billion) in rental relief already allocated by Congress. Only about US$3 billion of that sum has been distributed so far.

Senate Republican Leader Mitch McConnell said yesterday it “doesn’t seem to me to require any additional legislative action to get the money out there that’s already been made available, so it can solve the problem.”

More than 15 million people in 6.5 million US households are currently behind on rental payments, according to a study by the Aspen Institute and the Covid-19 Eviction Defense Project, collectively owing more than US$20 billion to landlords. ― Reuters