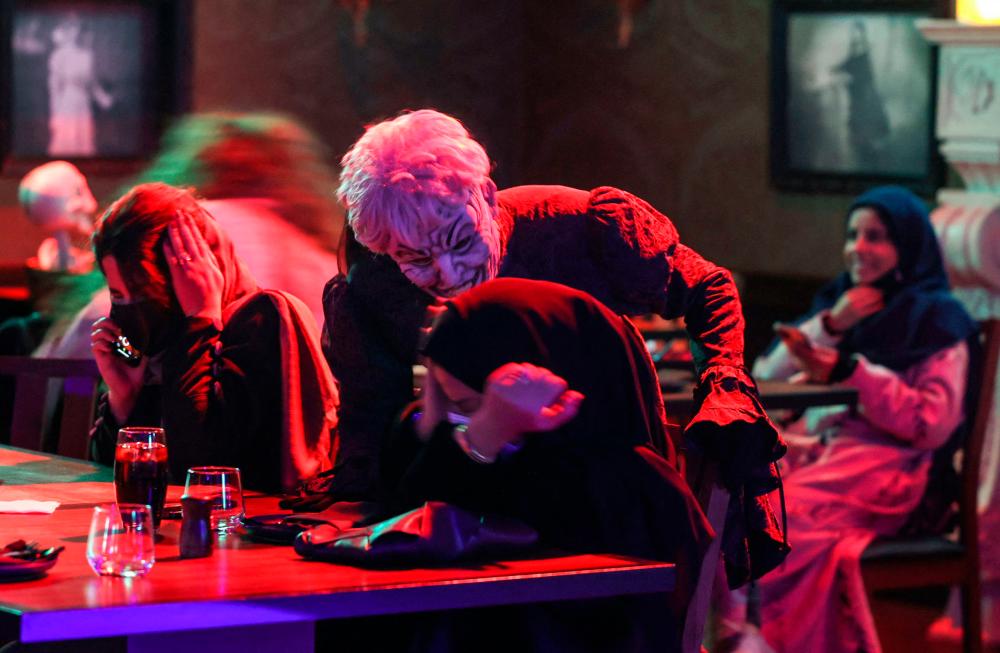 Actors in zombie costumes liven up the atmosphere at the horror-themed “Shadows” restaurant in the Saudi capital Riyadh’s Boulevard entertainment city, late on January 19, 2022. AFPPIX

RIYADH: A restaurant in Saudi Arabia is offering patrons in the conservative kingdom a unique experience -- dishes with a side of skull and blood in the company of zombies and vampires.

The restaurant, “Shadows”, caters to horror film buffs with strong stomachs, allowing them to savour their dishes while staff in gory costumes put on interactive shows.

It's located in the Boulevard entertainment district of the capital Riyadh and has opened as the Gulf country seeks to soften its image.

“I came here to have fun and laugh... but the atmosphere and the shows are actually very scary,“ one diner, Nora al-Assad, told AFP.

“I’ve lost my appetite,“ added the 26-year-old who works in human resources, as a waiter presented her meal on a tray with a smiling black skull.

Her friend, Jawaher Abdullah, a doctor, was more than thrilled to wolf down her dinner.

“I like horror in general... I think the atmosphere is great and lots of fun,“ she said, before taking a selfie with a performer with a fake bleeding chest wound.

For businessman Sleiman al-Amri, the restaurant experience caters to his hunger for a good adrenaline rush.

“We’re always looking for new and exciting things to do in Riyadh,“ said the 45-year-old, dining with his family.

Amri, donning the traditional dishdasha robe, added: “Going to restaurants used to be about eating, getting full, chatting, and we’d go back home.

“But now we are eating, we are enjoying our time -- and we’re also terrified.”

The rise of Saudi Arabia's de facto ruler, Crown Prince Mohammed bin Salman, in 2017 has ushered many sweeping reforms, with the kingdom opening its doors to tourists in 2020.

In the past, Saudis would have to go abroad for entertainment, but a social shift -- including the opening of cinemas and mixed-gender concerts -- has changed the local dynamic. 3.‘Historic’ increase of guns in US: Justice Dept