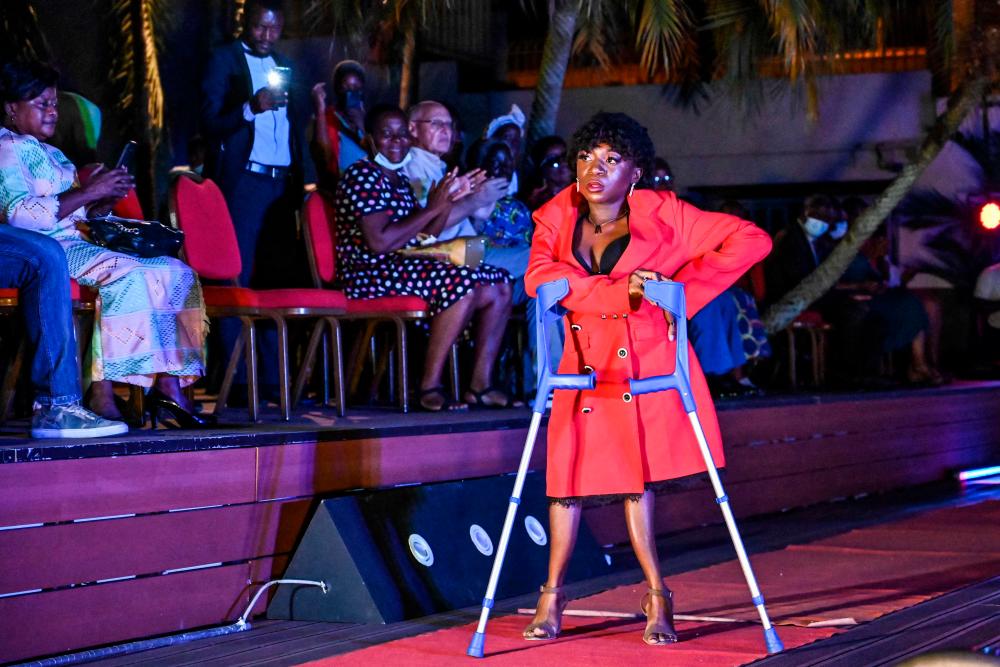 A woman walks down the catwalk during a fashion show of the Mougnan foundation (a NGO improving the living conditions and empowering young women with disabilities) as part of the International Day of Persons with Disabilities, in Abidjan, on December 3, 2021. AFPpix

ABIDJAN: Twenty models with disabilities have taken to the catwalk in Ivory Coast in a ground-breaking assault on taboo and stigma.

Decked out in a red suit, traditional Sahelian boubou robes, multi-coloured African bogolan prints and a blue tunic with printed motifs, the models showed off the latest creations of Abidjan designers in an event dubbed “Strong and Beautiful Together.”

Grace Beho had her right forearm amputated after a road accident.

Six months ago, she created the Mougnan Foundation, an organisation set up to improve the quality of life for disabled Ivorian women. Its name means “moving forward despite difficulties” in the Guere language of western Ivory Coast.

“I think that the women who are going to be watching us and who do not yet have confidence in themselves... are going to assert themselves and show themselves to the world as they are,“ she said as she stepped off the stage.

Leslie Antsere, who suffers from neurofibromatosis, a genetic disease which can cause disfiguring tumours, said she was delighted to take part in an event that had stopped her from “feeling ashamed.”

The MC at the fashion show, Nelly Aka, was sporting high heels despite a foot disability.

“Even in a situation of disability, we can go beyond ourselves and do many things,“ she said.

“Overcoming disability is about accepting yourself -- the way people look at you and criticise you will not affect who you are,“ she said.

A model called Sylvia, dressed in a green-and-white dress, opened the show, coming down the catwalk on crutches by the side of a swimming pool in front of an enthusiastic audience in a hotel in the Ivorian economic capital.

The event took place on December 3 -- the UN's International Day of Persons with Disabilities.

Officially, Ivory Coast has 453,000 people who are disabled in some way, two percent of the population. For them such an event is unheard of.

“Even mentioning a disabled person in the world of beauty is taboo in Ivory Coast,“ said Ange Prisca Gnagbo, one of organisers for the special evening.

“They are sidelined in all the beauty shows,“ she added.

But such practices are entrenched in Ivory Coast, where disabilities are often viewed -- as elsewhere in Africa -- as an affliction.

“Many disabled women are very vulnerable, rejected and marginalised. So they hide away for fear of being judged,“ said sociologist Yves Ouya.

For Dr Abdoudramane Coulibaly, consultant at the World Health Organization and head of a disability NGO, the issue also faces a lack of political will.

“Let’s suggest to able-bodied people that they walk with crutches for a day -- (that way) we will be gain more understanding than with big speeches,“ he suggested.

“My dream is that in the coming decades I will see a handicapped person making a name for himself or herself in areas where the doors have been closed,“ said Beho. - AFP