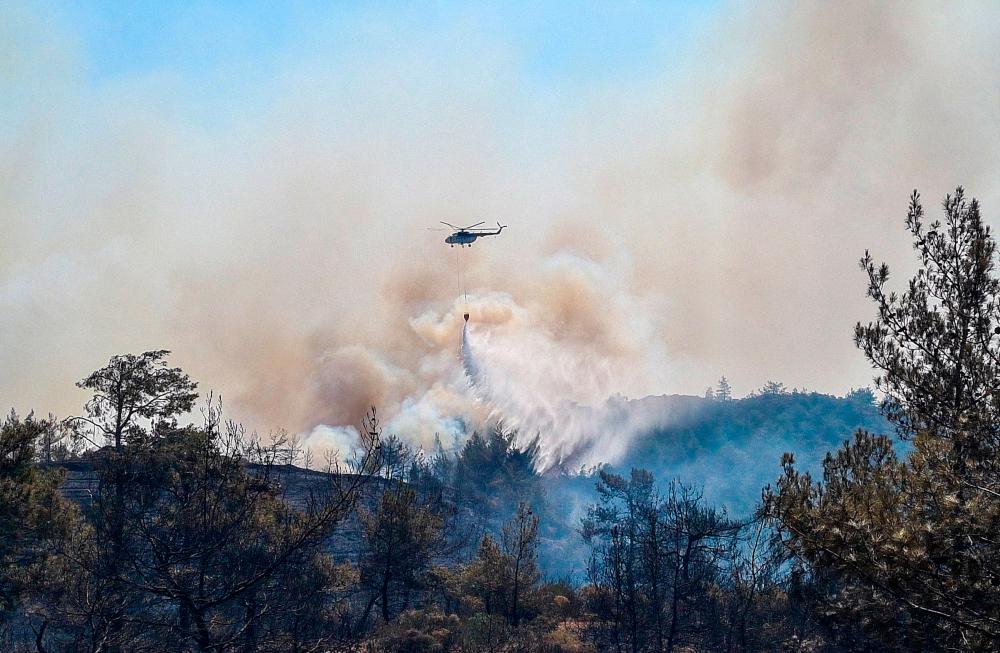 A firefighting helicopter drops water on a wildfire near Marmaris, a town in Mugla province, Turkey, June 22, 2022. REUTERSPIX

NICOSIA: Firefighting aircraft from both sides of divided Cyprus were joined by Israeli and British planes on Thursday battling a blaze that has scorched mountainsides and forced the evacuation of villages.

The fire spread rapidly overnight after breaking out earlier in the week in the Kyrenia mountain range in the breakaway Turkish Cypriot statelet of northern Cyprus, media reports said.

The government of the Republic of Cyprus, which controls the island's majority Greek-speaking south, said it had sent three aircraft to tackle the wildfire in response to a call for help from the Turkish Cypriot side via the United Nations peacekeeping force.

“The fire is still raging, and we are not yet close to extinguishing it,“ Cyprus forestry department chief Charalambos Alexandrou told state radio.

Israel said it was sending two firefighting planes and a cargo plane with firefighting equipment on Thursday “to help Cypriot firefighters cope with the fires raging in the north of the island”.

“The decision to send the planes was made following a request from the Cypriot government,“ it said in a statement.

The British military bases in Cyprus said they were also assisting the firefighting efforts by sending two helicopters after receiving a request from the north.

The UN peacekeeping mission in Cyprus said it was helping to coordinate the response to the wildfires.

Alexandrou said more firefighters were needed on the ground in order to bring the fire under control, since it could not be done by aircraft alone.

“The Republic is ready to send a ground force of up to 40 people to help put out the blaze,“ he said, adding they would be volunteers from the fire and civil defence services.

Cyprus has been divided since 1974 when Turkish forces occupied the northern part of the island in response to a military coup sponsored by the junta in power in Greece at the time.

Wildfires are frequent in Cyprus, with Israel and the UK military bases often helping out.

In July last year, wildfires that broke out in the Larnaca and Limassol regions claimed the lives of four Egyptian farmworkers.

Israel, Cyprus and Greece have an agreement to cooperate in dealing with natural disasters.

Last year, the Republic of Cyprus offered to help Israel with fires that raged in the Jerusalem mountains.

Its foreign ministry thanked Israel for responding to the latest disaster.

“Cyprus is grateful for the immediate fire fighting response and pooling up Israel aerial means with authorities on battling raging fires on the island,“ it tweeted. - AFP