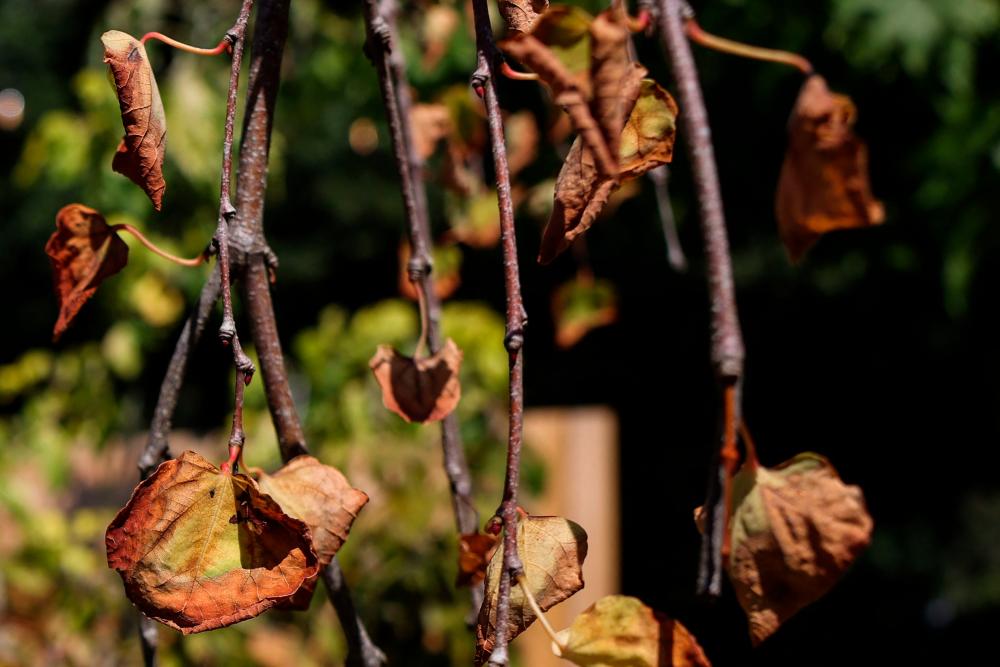 A photograph taken on August 12, 2022 shows dried leaves on a plant at Reuthe’s - The Lost Gardens of Sevenoaks, near Seal, in Kent, southeast of London. With the drought officially declared Friday, August 12 and water restrictions in place across swathes of England, horticulturists and others are urging a rethink of how the country’s famously manicured gardens are designed and managed. AFPPIX

SEAL: Gesturing towards her thriving wildflower meadow and still-green tree cover in this otherwise parched corner of countryside in southeast England, Claire Price is adamant gardeners must adapt to the country's evolving climate.

Price is the owner and self-described “custodian” of Reuthe’s, a woodland oasis of evergreen trees and shrubs in Sevenoaks, Kent, which appears better placed than traditional English gardens of lawns and flower beds to withstand the increasingly arid conditions.

“We do not water any of the shrubs or the trees in the ground at all,“ Price told AFP proudly on Friday, just as a hosepipe ban came into force across the county of Kent and neighbouring east Sussex.

“Our philosophy is if you treat the ground conditions correctly, so you dig in the right amount of... moisture and humus, then the plants will be able to cope with these extremes.

“That philosophy has shown to be for us the right solution... and, as our visitors walk around these amazing woodlands, they can see that everything is green and coping with the drought really well.”

With the drought officially declared Friday and water restrictions in place across swathes of England, horticulturists and others are urging a rethink of how the country's famously manicured gardens are designed and managed.

Price believes its gardeners need to “look forward” rather than back to the styles and preferences of previous generations -- with the long-held national obsession with neat, lush lawns her top target.

“I’m afraid their beautiful, manicured lawns need to go straight away,“ she said, arguing that their environmental benefits are not much better than those of artificial turf.

“We need to be planting those lawns with wildflower meadows,“ she added.

We need to “start to work with nature, rather than seeing nature as something to be obliterated and dominated.”

Reuthe's, an 11-acre site sprawling over a hillside, is home to rare tree species, as well as one of Britain's biggest varieties of specialist rhododendrons, azaleas, camellias and conifers.

Dubbed “the lost gardens of Sevenoaks”, it was first established in 1902 but largely off-limits to the public and was just a plant nursery for decades.

The entire site has only been fully accessible since 2018, when Price bought and began rehabilitating it.

Despite the ancient woodland's ability to withstand the current drought better than more ornamental gardens, like so much of the natural environment across drought-afflicted northwest Europe, it is feeling the effects of the record-breaking heat.

The garden’s bountiful rhododendrons, camellias and magnolias -- which typically bloom in spring -- are “quite durable” but going into survival mode and shedding leaves to retain moisture, Reuthe’s head gardener Melvyn Jones explained.

“This is unprecedented... we do fully expect to perhaps lose a couple of our species,“ he added.

Meanwhile, down in the nursery where visitors can buy plants and shrubs, frequent watering is required to keep them alive in the oppressive heat, with commercial sites omitted from the housepipe ban.

“It’s that combination between being frugal with the water -- not wasting it -- and trying to get as much moisture down to the roots of the plants as we can,“ Jones said.

Noting the region has had three consecutive summers of stifling heat and below-average rain, he added that its shifting climate is taking a toll on the ecosystem and its stewards.

“As a horticulturist it is hard,“ said the 56-year-old, who admits to worrying about the future.

“I’m an old guy now (and) it does seem that the seasons aren’t what they used to be, we don’t seem to get the four seasons that we used to have.

“As horticulturists, we need to look at future planning of... how we water and how we conserve water.”

In the meantime, Jones -- along with gardeners, farmers and many others across northwest Europe -- is “praying for rain every day”.

“Fingers crossed we have two or three days of torrential downpours -- that will help,“ he said. - AFP