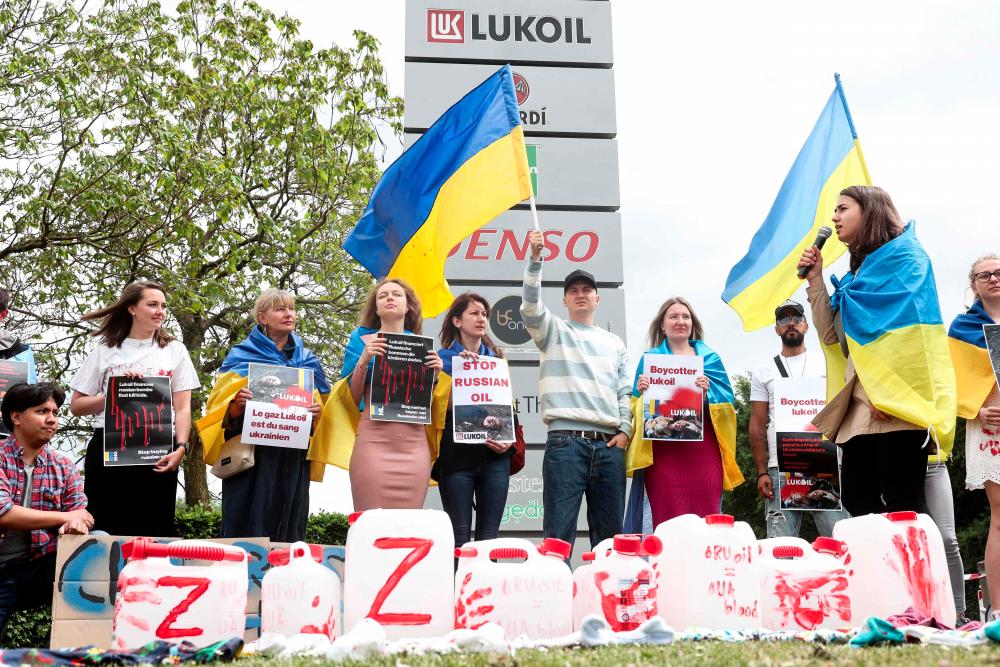 Protestors gather near the Lukoil headquarters to call to boycott the Russian oil company in Brussels on May 13, 2022. AFPpix

WANGELS: Europe pledged another half billion dollars in military support for Kyiv on Friday and Sweden edged closer to joining NATO as the war in Ukraine entered its 12th week.

“The recipe is clear -- more of the same,“ Borrell said.

Group of Seven foreign ministers are in the German sea resort of Wangels, where they are discussing the crisis with counterparts from Ukraine and Moldova.

“It is very important at this time that we keep up the pressure on Vladimir Putin by supplying more weapons to Ukraine, by increasing the sanctions,“ British Foreign Secretary Liz Truss said.

President Vladimir Putin invaded Russia’s neighbour on February 24, unleashing a worldwide shock that has been felt especially in northern and eastern Europe.

Finland’s leaders on Thursday recommended their country ditch a decades-long posture of neutrality and join NATO as soon as possible.

In Sweden, a security policy review by parliamentary parties on Friday highlighted the advantage of becoming a member of the alliance.

“Swedish NATO membership would raise the threshold for military conflicts and thus have a deterrent effect in northern Europe,“ it said.

“Within the framework of current cooperation, there is no guarantee that Sweden would be helped if it were the target of a serious threat or attack,“ it said.

The report stopped short of offering a concrete recommendation, although expectations are high Sweden will follow Finland when the government announces its decisions in coming days.

Many analysts see the war as turning into a grinding conflict after expectations of a lightning victory by Russia sputtered out.

After several weeks, Russia abandoned attempts to seize the capital Kyiv as the Ukrainian army defended it fiercely and the West began to pump in billions of dollars’ worth of military support.

Since then, Russia has focused its efforts in the eastern region of Donbas, where it has been supporting ethnic Russian-separatists.

Ukraine’s army said Friday Russian artillery reinforcements had been brought in to shell villages in the northeastern Chernigiv region, near the border with Russia.

Russian troops are trying to establish “full control” over the eastern town of Rubizhne, it said.

Artillery and aviation power are pounding the southern port city of Mariupol, where a number of Ukrainian troops are holding out at a huge steelworks despite a weeks-long siege, it said.

“One of the reasons for the enemy’s transition to this tactic is the refusal to use aviation, which suffers vast losses,“ he said.

A Russian soldier accused of killing a civilian appeared in a court in Kyiv on Friday ahead of the first war crimes trial since the start of the offensive.

Vadim Shishimarin, 21, allegedly gunned down an unarmed 62-year-old civilian who had witnessed a carjacking by fleeing Russian troops.

He faces possible life imprisonment on charges of war crimes and premeditated murder.

The trial marks a significant moment in Ukraine, where accounts of murder, torture and rape by Russian forces are multiplying.

In eastern Ukraine, witnesses who spoke to AFP in the village of Stepanki, near the regional capital of Kharkiv, accused the Russians of shelling a home, killing several people.

They said six people who lived in the house were drinking tea in the courtyard when a tank approached.

“They started going into the house to hide,“ said Olga Karpenko, 52, whose daughter was among those killed. The tank took aim and fired at them as they entered the house.

“Four people died, two were injured. My daughter died from a shrapnel wound in the back of her head,“ Karpenko said.

The UN Human Rights Council voted overwhelmingly on Thursday -- in a session boycotted by Russia -- to probe allegations of atrocities in the Kyiv, Chernigiv, Kharkiv and Sumy regions.

The International Criminal Court (ICC) in The Hague has already begun its own inquiry, sending investigators to the Kyiv suburb of Bucha.

More than six million people have fled Ukraine, more than half of them going to neighbouring Poland, the UN refugee agency says.

Economists on Friday were poring over the impact of a downturn in Russian gas supplies for Europe, where several countries, including Germany, are heavily dependent on Russian energy.

Gazprom also said gas transiting to Europe via a site in Ukraine had dropped by a third.

Ole Hvalbye, a specialist with the Scandinavian bank SEB, said the loss through Ukraine amounted to around two percent of European gas consumption, while the Polish pipeline had carried little gas for several months.

The fall “does not scream crisis, but it is a wake-up call for what is to come,“ he said.

Ukraine and Poland are major supply routes for Russian gas to Europe and the two sides have kept flows going despite the conflict.