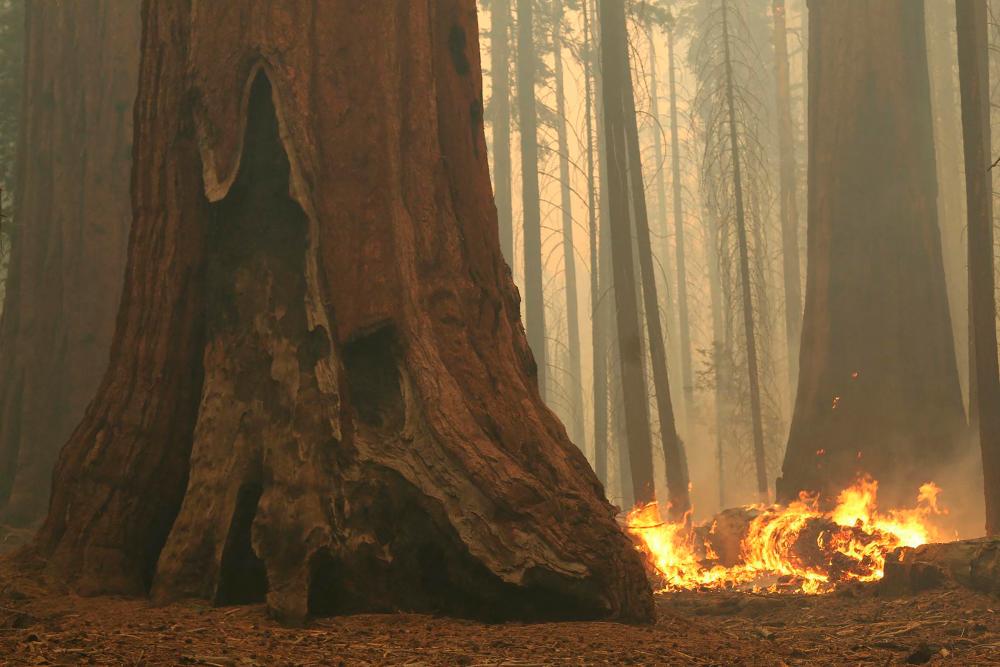 In this handout image courtesy of the Bureau of Indian Affairs (BIA) released on September 19, 2021, logs burn between Giant Sequoias as the Windy fire burns along the Trail of 100 Giants in the Sequoia National Forest, near Ponderosa, California. AFPix

LOS ANGELES: Hundreds of firefighters were battling to protect several groves of giant sequoias in the United States on Monday, warning the enormous ancient trees were at risk from out-of-control blazes.

A number of separate fires were converging on the California woodland that is home to the huge trees, highlighting the terrifying power of wildfires to consume everything in their path.

Incident commanders said the Windy Fire, which has already charred 25,000 acres (10,000 hectares) has burned into the remote Peyrone Sequoia Grove and the Red Hill Grove.

“We don’t know that those are destroyed,“ Windy fire incident spokeswoman Amanda Munsey said, according to the Los Angeles Times. “But the fire has completely surrounded those two groves.”

In nearby Long Meadow Grove, the blaze had spread to the vulnerable top of at least one of the trees.

“It was running toward multiple trees and (firefighters) were able to get it out, but it did get into the crown of one of the sequoias.”

Wildfires that spread to the tops of trees – especially very tall trees – can move quickly through the forest, as the tops of the trees explode, showering embers over a large area below them.

General Sherman, which is estimated by the National Parks Service to be 2,200 years old, was wrapped in fireproof foil blankets last week.

Incident commanders said they believed they could protect the tree from the 24,000-acre blaze, which was sparked by lightning just over a week ago

They point to meticulous forest management over the last few decades, including prescribed burns that deplete available fuels, and slow the progress of fires.

California and other parts of the western United States are laboring under a years-long drought that has left swathes of the region's magnificent forests tinder dry.

The giant sequoias are the world's largest trees by volume. Their relatives, the California redwoods, can grow taller – well over 100 meters – but are not as wide.

Both kinds of tree are adapted to fires, with thick bark that protects them from heat.

In their lifetimes, which are measured in thousands of years, they typically endure lots of fires, the heat from which helps their cones to open, allowing the seeds to disperse.

But longer, hotter and more aggressive fires can damage them, sometimes irreparably, and California has recently seen multiple severe fire seasons in a row.

Rising temperatures and increased dryness due to changing rainfall patterns thanks to climate change create the ideal conditions for forest fires. The World Meteorological Organization said that the five-year period to 2019 was “unprecedented” for fires, especially in Europe and North America.-AFP

How Omicron highlights fading hope of herd immunity from Covid-19

I gave a good show: Kyrgios

Sale of VTL tickets between Malaysia and Singapore is re-opened

1.How Omicron highlights fading hope of herd immunity from Covid-19

3.I gave a good show: Kyrgios

5.Sale of VTL tickets between Malaysia and Singapore is re-opened