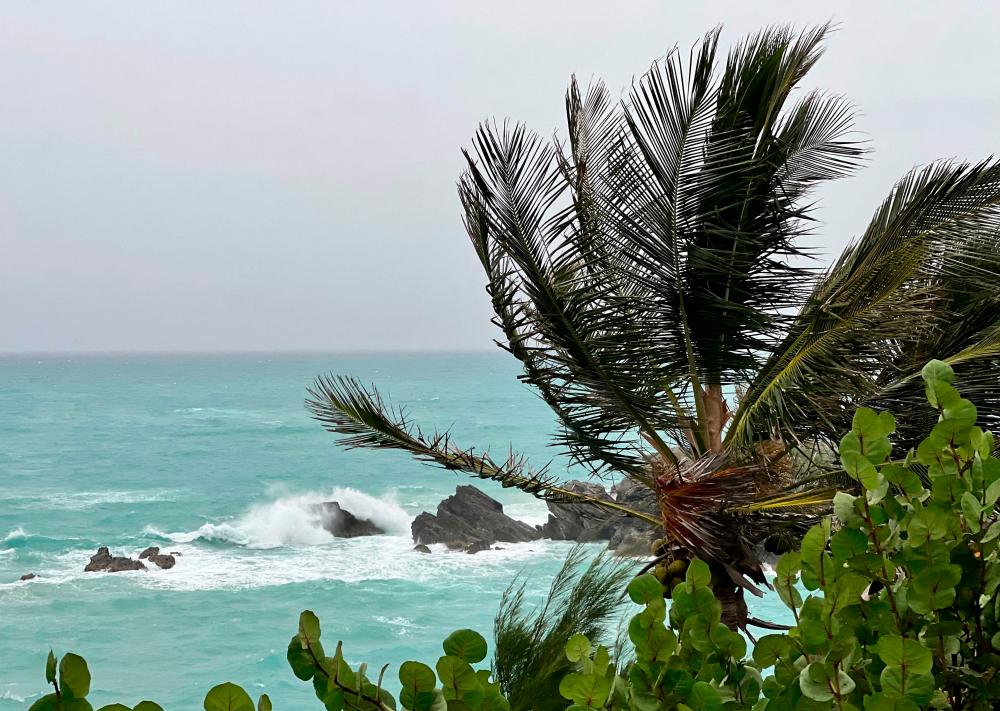 A palm tree stands in the wind in Church Bay, Bermuda, as Hurricane Fiona churned towards the Atlantic island as a powerful Category 4 storm on September 22, 2022. AFPPIX

BERMUDA: The beach chairs and umbrellas were put away, storefronts were covered and a lighthouse illuminated racing clouds overhead as Bermuda braced Thursday for Hurricane Fiona, a powerful Category 4 storm that has left a trail of destruction in the Caribbean.

Wind and waves were picking up as darkness fell over the British territory, and Bermudians rushed to the safety of their sturdy homes ahead of the storm, whose center will pass more than 100 miles (160 kilometers) to the west-northwest of the island early Friday, according to the Bermuda Weather Service.

Fiona remained a Category 4 storm, the second-highest level on the Saffir-Simpson scale, though Accuweather forecasters said it could be downgraded to a Category 3 as it passes Bermuda around 5:00 am (0800 GMT).

With a storm of that strength and size, residents were taking no chances.

“This storm is going to be worse than the last one,“ Richard Hartley, owner of the Torwood Home store in the capital, Hamilton, told AFP as he and his wife covered the shop’s cedar-lined windows with metal sheets.

The US National Hurricane Center (NHC) said the Fiona was packing maximum sustained winds of near 130 miles per hour, with higher gusts.

Hurricane force winds extend more than 70 miles from the storm’s eye, and tropical storm force winds up to 200 miles, the NHC said, predicting up to four inches (10 centimeters) of rain and “large and destructive” waves and storm surge.

The island of some 64,000 people is no stranger to hurricanes -- but it is also tiny, just 21 square miles (54 square kilometers), and one of the most remote places in the world, 640 miles from its closest neighbor, the United States.

That means there is nowhere to evacuate to when a big storm hits.

“You have to live with it because you live here, you can’t run anywhere because it’s just a little island,“ said JoeAnn Scott, a shopworker in Hamilton.

Bermudians try to “enjoy it as it comes,“ she said. “And pray and pray. That’s what we do, pray and party,“ she added with a laugh.

At Bermuda's famed Horseshoe Bay Beach, where onlookers came to assess the pounding waves and stretch their legs ahead of a long night inside, resident Gina Maughan said the island would be ready.

“It’s always interesting to come down and see the surf,“ she said, watching two kitesurfers soar into the air.

“These guys are a little crazy,“ she added.

Because of the island's isolation, preparations are taken seriously.

Many boats were taken out of the water earlier in the week, outdoor furniture was moved inside, and the storm shutters bordering windows on most houses were checked.

Public schools will be closed on Friday, and the government announced that an emergency shelter will be opened. Buses and ferries had stopped running by late Thursday.

The Royal Bermuda Regiment was on standby to help with clearing operations, and National Security Minister Michael Weeks implored residents to stay inside until the all clear was given.

“Please Bermuda, no driving around, no venturing out to take pictures, no reckless behavior,“ he told a press conference.

In addition to laying in supplies of candles and food, some Bermudians were also drawing buckets of water and filling bathtubs from the tanks at the side of their homes ahead of expected power outages.

There is no fresh water source on the island, so all buildings have white, lime-washed roofs that are used to catch rainwater that is directed into tanks and pumped into homes as the main water supply.

Bermuda, whose economy is fueled by international finance and tourism, is wealthy compared to most Caribbean countries, and structures must be built to strict planning codes to withstand storms. Some have done so for centuries.

“The construction is really built to last, and we don’t see the devastation ever that the Caribbean has experienced over the years,“ shop owner Hartley’s wife, Elaine Murray, said.

Fiona killed four people in Puerto Rico earlier this week, according to US media, while one death was reported in the French overseas department of Guadeloupe and another in the Dominican Republic.

President Joe Biden has declared a state of emergency in Puerto Rico, a US territory that is still struggling to recover from Hurricane Maria five years ago.

“I’ve been through a lot of hurricanes, so no, I’m not worried,“ said resident Rochelle Jones.

But if things do go wrong, Bermudians will “all come out together and we help each other,“ she said. - AFP