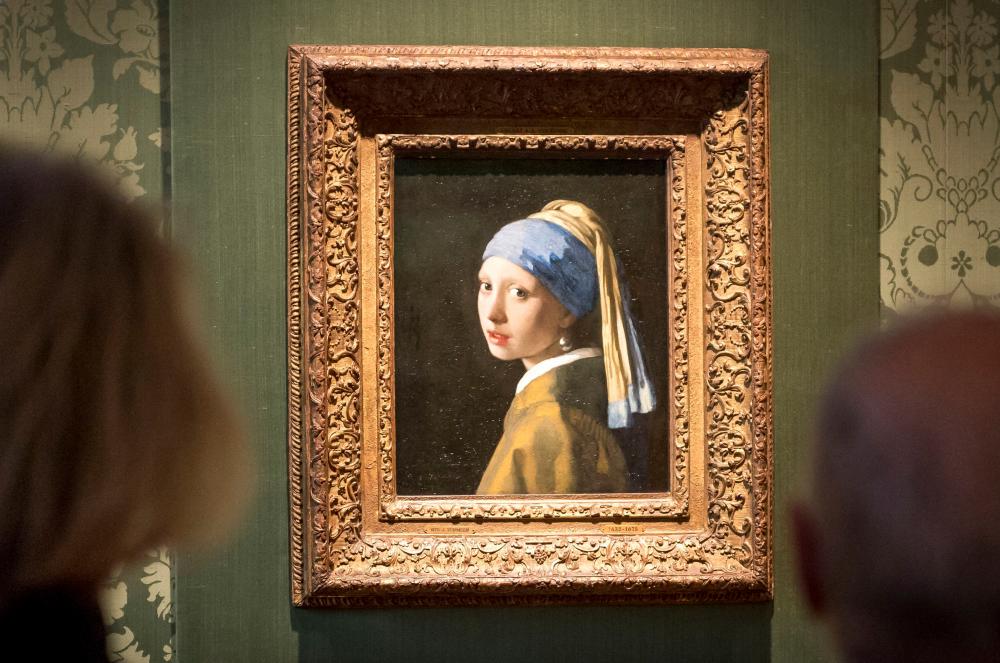 Visitors looks at the Johannes Vermeer's painting "Girl with a Pearl Earring" at the Mauritshuis museum in The Hague, 27 October 2022. - AFPPIX

THE HAGUE: Climate activists glued themselves to Johannes Vermeer’s “Girl with a Pearl Earring” at a Dutch museum on Thursday in the latest stunt targeting famous artworks, but the painting was undamaged.

Three people were arrested after the attack at The Hague’s Mauritshuis museum on the 1665 masterpiece which has inspired a bestselling novel and a Hollywood film, police said.

Social media images showed a man wearing a “Just Stop Oil” t-shirt glueing his head to the painting, while another glued his hand to the wall and a third emptied out a tin of what appeared to be tomato soup.

The stunt comes after activists threw soup at Vincent van Gogh’s “Sunflowers” at the National Gallery in London on October 14 and smeared mashed potato over a Claude Monet painting in Germany.

“Art is defenceless and and we strongly condemn trying to damage it for whichever cause,“ the Mauritshuis said in a statement to AFP.

The museum said the incident happened at around two pm (1400 GMT) and that police were called.

The Mauritshuis added: “We have immediately inspected the painting, which was done by our restorers. Fortunately the painting... was not damaged.”

The painting would return on display “as soon as possible”.

The Hague police said on Twitter that they had arrested three people in a museum for “public violence against goods”.

Dutch museums had stepped up security after the “Sunflowers” stunt and the potato attack on Monet’s $111-million “Les Meules” (Haystacks) at the Museum Barberini in Potsdam on Sunday.

Dozens of people were gathered inside the Mauritshuis waiting for news after Thursday’s incident, while security guards told them not to get too close to the other paintings, an AFP reporter said.

The entrance to the room where the “Girl with a Pearl Earring” normally hangs was blocked off by a large reproduction oil painting and a guard said it would likely be closed for the rest of the day.

Two police vans were parked outside the museum while investigations continued.

A video of the incident on Twitter showed a shaven-headed activist sticking his head to the “Girl with a Pearl Earring”. Another poured a red substance from a tin over the head of the first activist.

A third man in a white “Just Stop Oil” t-shirt shouted “how do you feel” as he glued his hand to the wall.

“How do you feel when you see something beautiful and priceless being apparently destroyed before your eyes,“ he said. “This painting is protected by glass but the future of our children is not protected.”

Art lovers have long been fascinated by Dutch master Vermeer’s painting of the young woman with an enigmatic look, wearing a blue and yellow turban, a heavy pearl hanging from her ear.

It has provided further inspiration notably for Tracy Chevalier’s 1999 novel “The Girl with the Pearl Earring” which gave rise to an Oscar-nominated film starring Scarlett Johansson and Colin Firth. - AFP