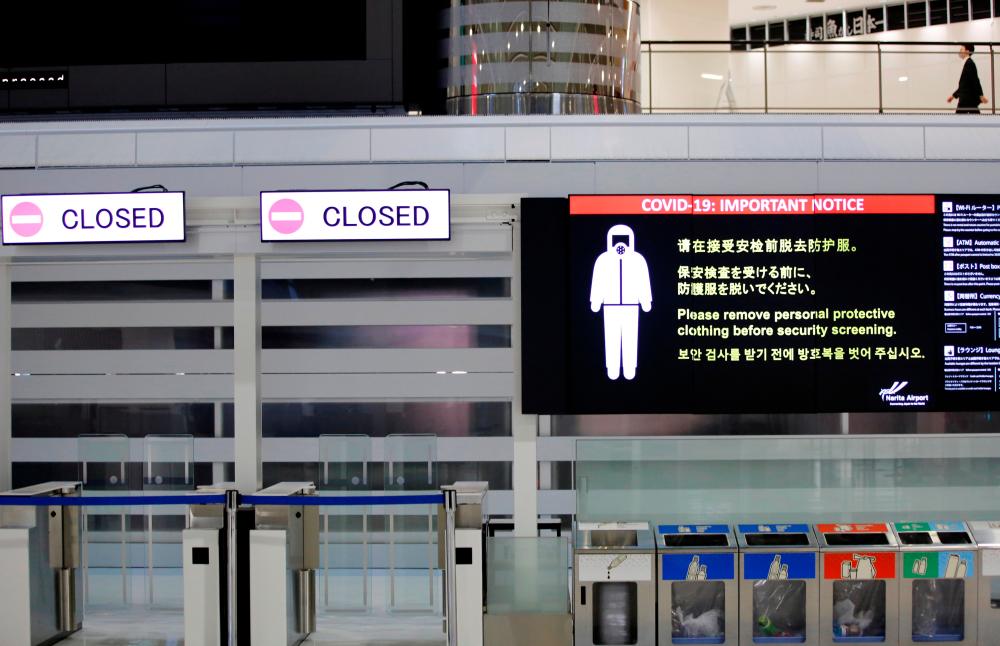 FILE PHOTO: A notice about Covid-19 safety measures is pictured next to closed doors at a departure hall of Narita international airport on the first day of closed borders to prevent the spread of the new coronavirus Omicron variant in Narita, east of Tokyo, Japan, November 30, 2021. REUTERSpix

SYDNEY/CHICAGO: Airlines are bracing for a fresh round of volatility due to the Omicron variant of Covid-19 that could force them to adjust schedules and destinations at short notice and to rely more on domestic markets where possible, analysts say.

Many travellers have already booked trips for the Christmas period, a peak season for airlines, but there are growing industry concerns over a pause in future bookings and further delays to the already slow recovery in business travel.

Fitch Ratings said it had lowered its global passenger traffic forecasts for 2021 and 2022, with the emergence of new variants like Omicron highlighting the likelihood that conditions would remain volatile for airlines.

“It feels a little bit like we are back to where we were a year ago and that’s not a great prospect for the industry and beyond,“ Deidre Fulton, a partner at consultancy MIDAS Aviation, said at an industry webinar on Wednesday.

Omicron’s impact will vary by country and region due to the diverse nature of global airlines as well as their business models.

Gulf hub carriers acted swiftly to protect their hubs by curbing passenger travel from southern Africa, fearing that the spread of the new variant would trigger restrictions beyond the immediately affected regions.

Airlines in countries with large, strong domestic markets like the United States, China and Russia are better shielded from the more volatile nature of international travel.

An analysis by UBS shows U.S. carriers have not yet changed their scheduled capacity, which is running at 87% of 2019 levels in December and is expected to reach 92% of pre-Covid capacity in January.

United Airlines is launching its Newark-Cape Town route on Wednesday despite a U.S. ban on non-citizens entering from South Africa and Delta Air Lines said bookings over the Christmas period were strong.

“In the past year, each new variant has brought a decline in bookings, but then an increase once the surge dissipates. We expect the same pattern to emerge,“ said Helane Becker, an analyst at Cowen and Co.

Travel booking website Kayak said international travel searches from the United States were down only 5% on Sunday - a stark contrast to a 26% fall in searches from Britain, which had tightened testing requirements for arrivals.

Major European airlines are far more dependent on international travel than their U.S. counterparts, placing them more at risk of fallout from the Omicron variant.

easyJet Chief Executive Johan Lundgren said on Tuesday there had been an impact to short-term departures, though not at the same level seen previously when restrictions were introduced.

In Asia, countries like Australia, Japan, Singapore and Thailand had only begun to cautiously lift border restrictions in recent weeks and passenger numbers remained at fractions of pre-pandemic levels before the Omicron variant was discovered.

John Grant, chief analyst at travel data firm OAG, said moves by Japan and Australia to delay entry to some foreigners due to Omicron were “sad and frustrating” but the proportionate impact on travel was “relatively insignificant”.

Airlines globally have been more agile about quickly adjusting their schedules and destinations during the pandemic and that is expected to continue, he said. — Reuters