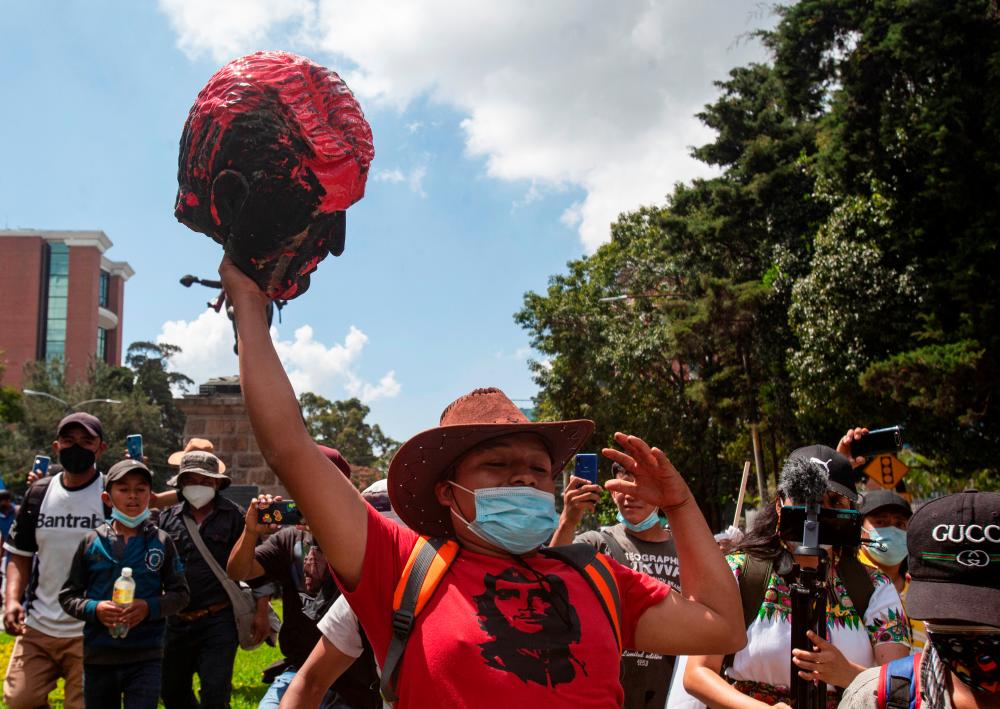 A demonstrator holds a head torn off from the statue of former President Jose Maria Reina Barrios during protests against the treatment of indigenous people by European conquerors, during Hispanic Heritage Day, in Guatemala City, Guatemala, October 12, 2021. REUTERSpix

GUATEMALA CITY: Protesters in Guatemala tried to topple a Christopher Columbus statue on Tuesday amid protests against the treatment of indigenous people by European conquerors, the latest effort in a global movement to re-examine symbols of the colonial era.

The demonstrations coincided with Hispanic Heritage Day, commemorated worldwide to mark Columbus' arrival to the Americas, but which has faced criticism for not recognizing the disastrous effects on indigenous people, many of whom were enslaved or died of diseases brought by the foreigners.

In Guatemala's capital on Tuesday, a group of people strained to dismantle a towering Columbus statue by pulling a long rope tied to its neck but could not tear it down, social media videos showed.

The monument, which stretches 30 feet (9 meters) up and weighs 10 tons, was shipped to Guatemala from Spain in 1896.

Another group of protesters succeeded in tearing away the head on a monument to former President Jose Maria Reina Barrios, who served from 1892 to 1898, after splashing it with red paint.

Daniel Pascual, a leading advocate for farmer rights, said he was on the streets for Indigenous Resistance Day, not to pay tribute to Columbus and the repressive leaders who followed.

"They were invaders and a continuation of the invasion," he said.

Guatemala City said in a statement it opposed the "acts of vandalism" taken against monuments it described as "historical heritage."

Columbus led several Spanish-funded expeditions from the 1490s onward, opening the way for the European conquest of the Americas. A number of statues honoring the Italian navigator have been removed from U.S. cities since the Black Lives Matter protests, as well as in other countries.

In Mexico's capital, officials on Tuesday said a replica of a pre-Hispanic sculpture depicting an indigenous woman, dubbed "the young woman of Amajac," will replace a bronze, 19th-century Columbus https://www.reuters.com/world/americas/mexico-city-replace-columbus-statue-central-avenue-2021-09-06 statue on the city's main thoroughfare removed last year.-Reuters